Hurricane season is back, so be prepared 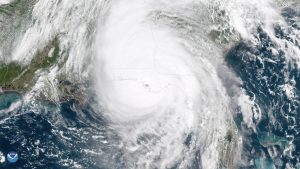 This is the time of year when Floridians fix their eyes on the Atlantic Ocean and the intense storms that brew in its waters. Hurricane season starts tomorrow.

NOAA’s Climate Prediction Center is forecasting the likelihood of a “near-normal” season this year, which means the production of nine to 15 named storms with 39-mph winds or higher, including four to eight hurricanes with 74-mph winds or higher. Two to four of these hurricanes could potentially develop into category 3, 4 or 5 storms of 111 mph or higher.

“Before 2016, a hurricane had not hit Florida since Wilma in 2005, and that’s very unusual,” Noah said. “The last major hurricane to hit Tampa Bay was the 1921 storm whose eyewall passed Tarpon Springs and pushed 11 feet of water onto Bayshore Boulevard.

Noah said due to increasing sea levels and coastal development, the impact of a major hurricane would be catastrophic. “The chances of that happening are one in 200, so you could live your entire life and never see one,” he continued. “But we never know for sure where these storms will hit. If Irma had waited six more hours to turn, she would have gotten into the Gulf of Mexico and made landfall as a Category 3 or 4 hurricane in the Tampa Bay area rather than hitting Naples.” 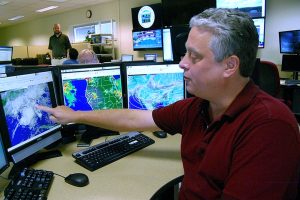 Dan Noah, warning coordination meteorologist for the National Weather Service in Ruskin, advises residents to make their hurricane plans now rather than waiting until a dangerous storm is on its way.
LOIS KINDLE FILE PHOTO

A storm like that could have a storm surge of up to 22 to 31 feet. Southern Hillsborough County residents must have a plan. Coastal communities with low elevations like Ruskin, Apollo Beach and Gibsonton, are extremely vulnerable to storm surge, so if officials say to evacuate, they’re not kidding.

“And if you need to evacuate, think in tens of miles rather than 100s,” Noah said. “If you prepare now, you’ll have much less anxiety when the storm approaches.’

The hurricane season officially starts June 1 and ends Nov. 30. Sept. 10 is its peak and the months of August, September and October are generally the most active.