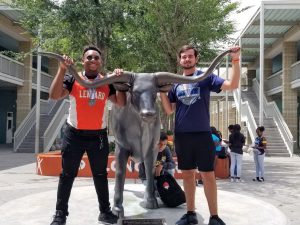 Hunter Myers, a junior, and Laudrey McCray, a senior, established high-water marks in their athletic endeavors at Ruskin’s Lennard High School this year. Their achievements were not showcased under the glare of the Friday Night Lights, nor were they the awe-inspring slam dunks on a hardwood basketball floor or the launching of a home run on the diamond. These two “throwers” made their statements with heavy metal by working as a team in their respective specialties.

McCray possesses the brute strength and physique, but he had no clue as to the technique of “puting” an approximate 12 pound ball of metal ­­— the shot put. Myers had practiced and somewhat mastered the style and technique of hurling the discus, a four pound metal Frisbee, in the summer preceding his freshman year.

Track & field rarely attracts much attention from sports spectators, either live or on TV. Granted, the Olympics stirs up interest and excitement every four years. Track and Field athletes also compete in global events, or meets, which draw the attention of aficionados and possibly the passive TV viewer, surfing for some competitive action, as well. But even though it is one of the oldest sports, dating back at least to ancient Greece and the origin of the Olympic games, track and field, in reality, does not have the mass appeal of either amateur or professional baseball, football or basketball. And even though there has been an upswing in track and field activities among youth, and increasing participants from kindergarten age through college, track and field, by any standard, is relegated to the back burner at the high school level.

A pair of track and field athletes from Lennard High in Ruskin, one mentoring the other, a newcomer, have thrust themselves and Lennard into the limelight this spring by competing and by winning medals at the state level, the first dual medals in Lennard’s history. 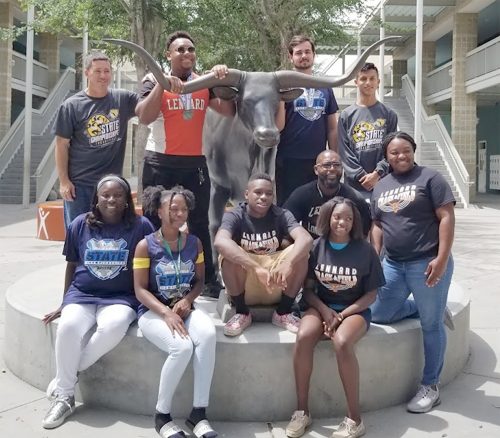 The pair are big, strong youngsters, whose bulk and strength are suited for the field portion of the track and field sport. You will not see these guys, lean and swift, blazing down the track or leaping great heights or distances. No, this pair labors in the infield, the grassy area inside the oval track, usually reserved for football or soccer, thus, the designation “field.” A more specific name for track and field would be track and “throwing.” The participants “throw” heavy implements with their winning or success measured in distance against competitors. The four standard throwing events are the javelin, the hammer, the shot put, and the discus.

These Longhorn throwers are relative rookies. One, Hunter Myers, was introduced to and started throwing the discus only two years ago. The other, Laudrey McCray, never “put” the shot put in competition until this season. This was Laudrey’s first season as a thrower. Hunter began throwing the summer before his freshman year at Lennard.

Hunter has worked very hard over the past two years to refine and improve his discus throwing technique. Hunter (6’3” / 220 lbs.) is a taller athlete than the more stocky Laudrey, who is 6’0”/240 lbs. While Hunter’s specialty is the discus, he knew that there wasn’t time for Laudrey to learn solid discus technique, and Laudrey’s body and strength are more suited for the shot put. The two boys began working together to refine Laudrey’s shot put technique. Through Hunter’s mentoring and Laudrey’s dedication and ability to learn, the student-athletes accomplished great things in 2019.

The goal that the young men set for themselves at the beginning of the year was to “go to state” (earn a spot at the Florida high school state track meet): with Hunter focusing on discus, and Laudrey focusing on the shot put. Being in the most competitive division for these two events (3A) meant that it would require a great deal of work in a very limited time. The first organized track practice cannot start until Jan. 20, and the state meet is early May each year. The challenge was thrown down: Could Hunter’s coaching and Laudrey’s work ethic overcome that challenge? Hunter had finished 16th the previous year at the state meet as a sophomore, so he knew what was expected of him to return. Laudrey’s goal was set at throwing the 12 lb. shot over 48 feet. This was the mark that had been calculated, based on the 2018 state meet entries needed at the regional track meet to make it to state. The work began: Laudrey pushing the heavy ball, and Hunter coaching him to refine his technique – over and over and over and over again. Repetition leading to muscle memory is the only way to learn to properly throw.

The trip to state began at the district competition. There are 4 classes in the state of Florida, 1A through 4A. The top 4 in each district event advance to region (4 districts per region). Once at region the top 4 per event advance to state, plus the next best 8 overall scores compiled from all regions per class (4 regions per state class). Based on best guesses from 2018, Laudrey needed 48 feet at the region meet to garner one of those “next best 8 spots,” while Hunter needed 145 feet in the discus.

The two Longhorns dominated the conference division meet. Next, the boys both won the county championship. Then they won district. Then came the regional meet with stiffer competition and more pressure! Shot was first, with discus to follow. Laudrey was to compete against the best in the entire state for shot, and Hunter against the best for discus. Both boys finished 4th at region to advance to state: Laudrey with a massive throw of just over 54 feet, and Hunter slinging the heavy discus over 165 feet.

Not only did both boys medal at state, they won the first dual medals in Lennard’s history!Both boys have also set new school records, improving on the records before they arrived at Lennard by over 25%. Hunter has one more year and has set a goal to win state in his senior year in discus. On most days during the week, you can find him at the local gym or at the park, working on his technique.

McCray’s 4-month throwing career may not be over just yet as he has recently received several offers from colleges, an amazing accomplishment. Myers, still having one more year of high school, is hoping to be recruited by a D1 university next year. He also is searching Lennard for the next throw athlete and mentee to bring along with him to state in 2020.