A new experience for Riverview

PROVIDED BY HILLSBOROUGH COUNTY
The two-story 18,000 square-foot structure sits on 4.64 acres and will include indoor and outdoor seating areas with parking provided for up to 215 spaces up to a maximum of 270 spaces, according to county records.

At long last, the Tiki Docks River Bar & Grill is going up on the banks of the Alafia River. Sitting on 4.64 acres on the corner of U.S. 301 and Palmetto Street, just across the Alafia River bridge, the $7 million project will include three bars. Construction is under way and is expected to be completed by December or January. The original opening date had been set for this summer, but the project got backed up due to a steel shortage, a result of recent trade changes. “We had to sit and wait on that,” said Marc Brown, president of 23 Restaurant Group, which also owns Ford’s Garage in Brandon. 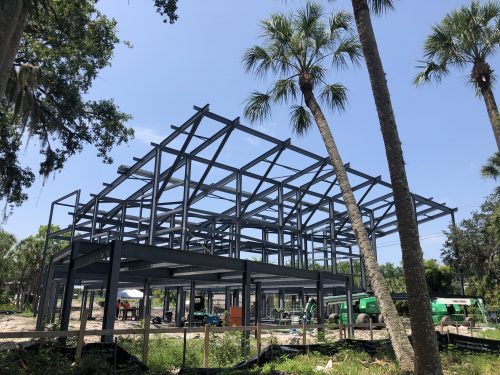 The Tiki Docks River Bar & Grill is currently under construction on the Alafia River near U.S. 301. It should be complete in early 2020. Photo from 23 Restaurant Group.

“Docks will be added to the waterfront location shortly after its opening, so boats can pull right up to the restaurant,” he explained. “It is starting to really take shape a little bit. It has been quite a process getting this one going. We are through the tough parts. There was a lot of structural planning because of the condition of the soil there, and things we had to do to get a good, sound structure.” 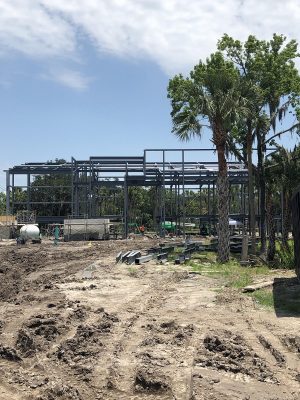 Typically, Brown’s company purchases a previously developed site and renovates. But this property was a start-from-scratch project. It required installation of 210 pylons down to bedrock to ensure a stable building. “When we acquired the land, it had never been developed before. Because it is on the river and is a very tall building, we also had to do flood preparation. For guests, it will appear as a one-story building, but, actually, it will have a second story that will be used for storage, he said.

About half the seating for the restaurant will be outside and half inside. The menu will include “casual seafood” at reasonable prices, along with burgers, salads and more. Brown added, “We try to provide an elevated dining experience with casually priced food. This won’t be fine dining seafood. Still, Tiki Docks will offer some great flavors,” he said, “in the way of grouper, shrimp, sandwiches, burgers and salads.”

Brown explained that he expects the restaurant will have a staff of 160-180. “We typically start hiring three weeks prior to opening. Management hires will begin three or four months before opening.”

While there has been some concern from the community about parking, Brown said there is plenty of room. “We have a tremendous amount of parking space, 170 or more spaces.”

There have also been some concerns about more boat traffic on the river. Patrick Bolger, who lives nearby, said last year that he worried about operating jet skis and similar watercraft on the river. For now, there will be no watercraft rentals at Tiki Docks.

Brown said he believes Tiki Docks will be bringing a new experience to the Riverview area. “I just think that when we look at our waterfront sites in Cape Coral and Fort Myers, it provides something that is really so appealing to a variety of demographics. It’s casual dining, but a very entertaining vibe.”