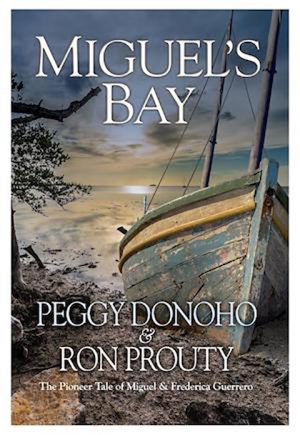 Native residents of Manatee County are proud of their local heritage, with some tracing their family roots back five or more generations.

These families have scoured government, church, and personal records to try to piece together their histories.

The family of two of the first nonindigenous settlers in the county, Miguel and Frederica Guerrero, now has a published book to show for their years of research.

Miguel’s Bay, coauthored by Peggy Anderson Donoho and Ron Prouty, tells the story of a Spanish fisherman and a German immigrant woman who homesteaded and raised a family on Terra Ceia Island.

Donoho said, “My mother always wanted to write a novel about her mother.” Donoho’s mother, Marian Anderson, 87, is the Guerrero’s great-granddaughter.

Anderson’s mother, Susie Annie Lee Bailey, was the daughter of Edmund Miguel Lee, one of the two surviving sons of the Guerreros. According to Donoho, time got away from Anderson and the book was never written, but she would write short articles about her ancestors for the family.

“Mom was very active about keeping the family name alive,” she said. “She has three file cabinets of photos, notes, and newspaper clippings about Miguel and Federica and their descendants.”

It was not until Donoho, 60, returned to Manatee County three years ago, after being away for more than 35 years, that she reconnected with her roots and thought about writing a book. 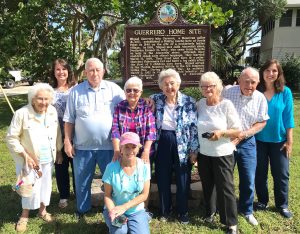 Descendants of Miguel and Frederica Guerrero, whose life story is told in the local narrative historical novel, Miguel’s Bay, co-authored by Peggy Donoho and Ron Prouty, gather during the dedication of an historical marker at the site of the Guerreros home on Terra Ceia Island. Donoho, the great-great-granddaughter of the Guerreros, did the research to get the marker approved. From the left are Flossie Dolan, Cindy McPheeters, Perry Bailey, Virginia Bailey, Marian Anderson, Elaine Bailey, Floyd Bailey, Peggy Donoho; kneeling is Patti Dolan.
PROVIDED PHOTO

“I’m back home where I need to be,” she said. “I’m like a mullet being thrown back into Miguel Bay.” Donoho’s twin sister, Cindy McPheeteers, also moved back to Manatee County around the same time. Their older sister, Karen Wheeler, lives in Alabama. Donoho has three adult sons: Landon, Andrew and Evan.

“As I got older, I wanted to learn more about my family,” said the Manatee High School 1976 graduate. She remembers her mother’s handing out a paper with the story of Miguel Guerrero at one of the family reunions while Donoho was in college. She also remembers there was always a lot of storytelling at the reunions, but as a young child she said she was more interested in playing outside.

When Donoho started to show some interest in the family’s heritage, her mother said she should write the book about her grandmother. Shortly after that conversation, Donoho ran into Prouty, a long-time family friend, at a book event at the Palmetto Library.

“I knew Peg and her sister when we were younger at West Bradenton Baptist Church,” Prouty said. “Our parents were friends.”

Cathy Slusser, chief historian in the Historical Resources Department of the Manatee County Clerk of Circuit Court’s office, was speaking on the historical novels she had written about three pioneer women in Manatee County. 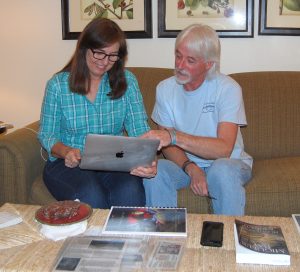 Peggy Donoho and Ron Prouty, co-authors of the local narrative historical novel, Miguel’s Bay, look over some of the sales reports on their first book.
CARL MARIO NUDI PHOTO

Thinking one day he would write a book, Prouty, who at one time was very active in a Civil War living history group, had done research on Manatee County residents who had served in the military during that war.

One particular war veteran he was interested in was Miguel Guerrero.“I had no idea Peg’s family had a connection to Miguel Guerrero,” Prouty said. “Then I saw a newspaper article saying that Mrs. Anderson was related to him.”When he reconnected with Anderson, he used her files to further his research.

After Slusser’s book reading, Donoho said she told Prouty that he should write a book about Guerrero. “Ron said he couldn’t do it alone because he was still working fulltime,” Donoho said. “He said he would write it if I helped with the research.”

So in the fall of 2016, Donoho and Prouty began their two-year journey of writing a book. “I was stuck in traffic on the Skyway Bridge, coming home from work, and could see Miguel’s Bay, so I got my cell phone and started writing the first chapter,” Prouty said.

A couple of weeks went by and Donoho was wondering when Prouty was going to send her the next chapter. “So I thought I’d write a chapter and send it to him to remind him and sort of give him a nudge,” she said. “We Anderson girls are impatient.”

She said she wanted to finish the book because some of her relatives are in their 80s and 90s, and she was interested in getting the book into their hands.

When Prouty received the chapter, he was impressed. “I said ‛this is good,’ he recalled. “Forget about just helping with the research,” he told her. “You can write Frederica’s part.” 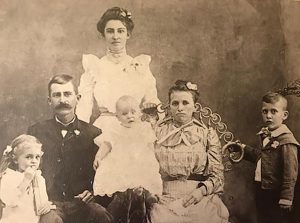 A period photograph shows Edmund Miguel Lee, 2nd from left, and his family. Lee was the son of Miguel and Frederica Guerrero and the great-grandfather of Peggy Donoho, who co-authored the local narrative historical novel, Miguel’s Bay, with Ron Prouty. Donoho’s grandmother, Susie Annie Lee Baily, is shown on the far left when she was a young girl.
PROVIDED PHOTO

“She was a natural,” Prouty said. “And our writing styles meshed.” They decided to tell the story with Donoho writing as the voice of Federica and Ron writing in the voice of Miguel. When they laid out the book, they used icons at the top of each chapter, a dolphin for Miguel’s story, and a hibiscus for Federica’s.

The dolphin icon is a variation of a Calusa Indian line drawing and also has been an ancient symbol of protection, blessing and good fortune to fishermen.They chose the hibiscus for Frederica’s chapters because the Christmas chapter describes Frederica’s missing all the beautiful glass Christmas ornaments from her life in Bavaria, Germany, and her looking around to see what she could use to decorate her cabin. She picked the red hibiscus. “Also, the hibiscus would have been new to her since it’s not native to Germany,” Donoho said. “It represented her new life in Florida.”

During the writing process Donoho said she did not like to call Miguel’s Bay historical fiction. “Historical fiction sounds like the story is not true,” she said. “A woman at a book fair we were at suggested calling it a ‘narrative historical novel.’ The book is based on known facts and dates, but the situations and dialogue have been imagined to make the novel more interesting,” Donoho said.

Miguel’s Bay was named after the bay that hugs the shoreline of the homestead Donoho’s great great grandparents, Miguel and Frederica worked on Terra Ceia Island. The book opens with Miguel, a fisherman who emigrated from the Spanish island of Menorca in the 1840s, taking shelter on the island during a bad storm while he was on a fishing expedition along the Florida Coast. 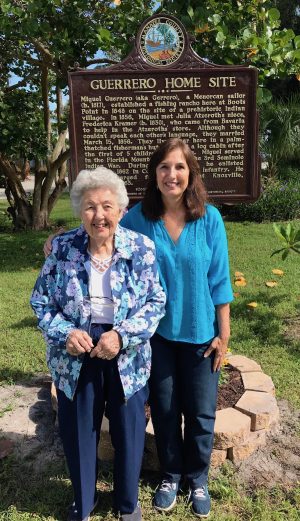 Mariam Bailey Anderson, left, stands with her daughter, Peggy Donoho, in front of an historical marker at the site of the home of Miguel and Frederica Guerrero on Terra Ceia Island. Anderson is the great-granddaughter of the Guerreros and was the inspiration for Donoho to write with Ron Prouty, a family friend, the local narrative historical novel, Miguel’s Bay, about the Guerreros’ life on the island.
PROVIDED PHOTO

Recognizing the potential of the bay to be a good fishing ground, he eventually established a fish rancho on Terra Ceia and soon met Frederica, who was the niece of a German immigrant couple, Joseph and Julia Atzeroth. Frederica was helping the Atzeroths in the country store they had established on Terra Ceia to supply area fishermen, like Miguel. The book is filled with stories of the couple’s trying to raise a family of five in the wilderness of mid-19th century Manatee County.

Without spoiling the ending, those familiar with the story of Miguel and Frederica know that the two youngest of their sons, Christopher and Robert, grew up in what is now Bradenton. Christopher, whose name was changed to Edmund Miguel Lee, was Donoho’s great-grandfather.

For Prouty, writing the book was fulfilling one of his passions. The 65-year-old has been interested in Manatee County history all his life, having lived here since he was two months old. On its way to Manatee Elementary School, his school bus would pass the Manatee Burying Ground at 15th Street and Sixth Avenue east, and he would think of the lives of the people who were buried there. “I would look at those old head stones and was intrigued,” the 1972 Manatee High School graduate said.

Prouty and his wife, Lynn, who has lived in Manatee County since she was 5 years old, have three children: Lorien, Kerri, and Jordan and five grandchildren.

Because of his love for history, from the early 1980s to about 2004, Prouty was part of a local Civil War living history group called the Confederals, whose participants were more than just reenactors. The Confederals would portray soldiers as they lived in the field from both the North and South armies of the Civil War. The group, called Company K, had historical roots in Manatee County.

“It was a real eye opener to learn there were Civil War events that took place in Manatee County,” Prouty said. He started researching the origins of Company K with the idea of writing a book and discovered that when Miguel Guerrero fought in the Civil War, he was a member of that company. A lot of his research ended up in the novel, Miguel’s Bay. 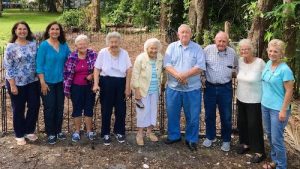 Descendents of Miguel and Frederica Guerrero, whose life story is told in the local narrative historical novel, Miguel’s Bay, co-authored by Peggy Donoho and Ron Prouty, gather at the site of the family cemetery of the Rev. Edmund Lee and his family in Old Manatee in East Bradenton. Rev. Lee and his wife, Electa, adopted the third child of the Guerreros, Edmund Miguel Lee, who was Donoho’s great-grandfather. Donoho spearheaded the clean up and the placement of an historical marker at the family plot. From left to right, Cindy McPheeters, Peggy Donoho, Virginia Bailey, Marian Anderson, Flossie Dolan, Perry Bailey, Floyd Bailey, Elaine Bailey, and Patti Dolan
PROVIDED PHOTO

Along with Prouty’s original research, Donoho’s mother’s file cabinets of records, and the endless hours Donoho spent in the Eaton Room at the Manatee County Central Library, the two made a 10-day trip in March 2018 to Menorca, the Balearic Island where Miguel was born and lived until the early 1840s.

The book was published in October 2018, but before then, Donoho and Prouty took the first proof copy to Donoho’s mother since she was the motivation for the project. “She cried when we gave her the book,” Donoho said. And because Anderson was a legal secretary, she proofread it for the two authors.

“I hope people see this book as more than just a story about an early settler couple,” Donoho said. “It’s more of a history of Manatee County.”

For more information about Peggy Donoho, Ron Prouty and their book, Miguel’s Bay, check out their facebook page at www.facebook.com/miguelsbay.