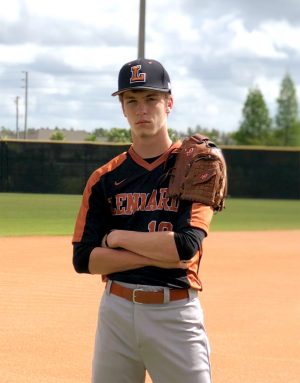 Jordan Rutherford, a senior at Lennard High School, will be attending Warner University in Lake Wales on a baseball scholarship.

The success of this season’s edition of the Lennard Longhorns baseball team is due, in great part, to the large throng of dedicated, talented seniors on the team. The 2019 soon-to-be graduates will go their separate ways after an outstanding year, winning the District and going to the playoffs. Some of the young men will go into the military, some will start their jobs/careers, and some will go on to community college or to university. For some, their days of playing organized baseball will end with Longhorns coach, Kennedy Duran. A few others will continue to play baseball in college, some on scholarship and some as walk-ons.

One player in particular, Jordan Rutherford, will head to Warner University in Lake Wales on a baseball scholarship.

Rutherford, like many of the current crop of Longhorns, offers quality versatility, which is not lost on the Warner baseball coaches. The 6-foot 2-inch, 165-pound senior takes “utility” player to a new level.

Like so many of his Longhorns teammates, Rutherford began his love for baseball and his development as a baseball player in the East Bay Little League. And, also, like many of the students on the diamond for the Longhorns at The Corral, Rutherford’s high school journey is academically entwined with the Lennard Collegiate Academy. Rutherford and many of his Lennard baseball teammates, as well as other students, make the short walk across the street to attend college-credit classes at Hillsborough Community College-South Shore. They take their regular high school classes on the Lennard campus.

It is a tribute to Rutherford’s hard work that he has earned a scholarship to Warner University. Warner, which is affiliated with the Church of Christ, is a Christ-centered, private, liberal arts college in Lake Wales. Under head coach Jeff Sikes, the Royals made it to the 2018 World Series of the NCCAA (National Christian College Athletic Association). Coach Sikes has won over 1,000 games in his 34-years as head coach at Warner.

Rutherford was initially designated by his high school coaches as Pitcher Only, but he realized he could help his team by changing positions and playing outfield as well. He spent his junior year working behind a senior in right field. His hard work has been rewarded with greater chances on an extremely talented ball club. Rutherford has maintained a batting average over .300 as Lennard, in a record-setting season, is presently 15- 5 overall and 8-0 in 7A District, with two regular season, non-district games remaining.

Rutherford plays travel summer baseball with Bullets Baseball. This past summer he made the IBC world series All-Tournament Team, which is hosted in Clearwater. Tournament coaches chose him for the all-tournament team because of the fact Rutherford just did everything well. He threw a 51-pitch game, getting the win! He hit well, filled in as a runner, and played outfield extremely well. He came in as a reliever and gave his team a chance for a win in another game. Summer baseball with Bullets Baseball has given him greater opportunities and allowed him to develop his pitching, his outfield play, and his hitting.

Rutherford is very excited to be playing for Coach Sikes at Warner University and looks forward to continuing to develop as a ballplayer and as a Christian student. It’s extra innings for Jordan Rutherford!