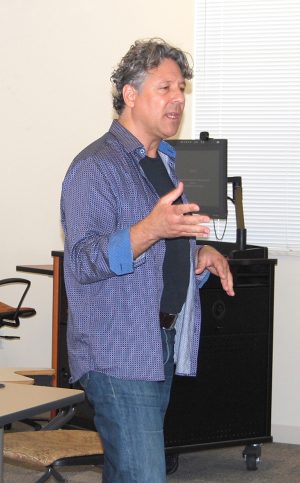 Most everyone has a different idea of what “home” means.

It could be a place, such as a town or city; or the building you grew up in; or, even, the people in your community.

The students of the Museum Studies: Artist As Curator course at New College of Florida wanted to explore that concept with an art exhibition called “Home,” to be held from 5 p.m. to 8 p.m., May 3, at the Origami Air Studio, 1063 Patterson Drive, Sarasota.

The nine students, all coming from different areas, were required to plan and execute the art exhibit for the class’s former art gallery director and local art professor Joseph Loccisano, who is teaching this semester at the public liberal arts honor college in Sarasota.

The student exhibit organizers encouraged artists to submit works in various media that illustrate what “home” means to them.

“The (Origami Air Studio) was the perfect (venue for the exhibition),” said Mia Reich, a New College senior, who is taking the class because she may pursue a career in museum management. “It’s a renovated house, one of the reasons it was chosen for our Home exhibition.”

Reich, who was appointed the executive curator for the class project and calls Cape Coral her hometown, said the exhibit space of the gallery gave the team the opportunity to quickly change how the artwork is displayed.

“There’s one large gallery and an adjacent smaller one,” she said. “The venue is quaint, and, regardless of the number of submissions, it will work.”

“Home as a theme was a collective decision,” Reich said. “We wanted something that people can connect with, and we wanted to see the different interpretations of “home.”

All of the students were given positions on the team to execute various tasks.

As executive curator, Reich said her job was to understand the tasks necessary to have a successful exhibition, to know the team member’s individual strengths, and then to delegate tasks.

“But we all have a say for the most part,” she said. “We want it to be a collaborative experience.” 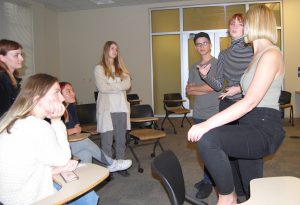 New College of Florida students Amanda Vorce, left, Megan O’Brian, Garland Hanson, Brittany Braasch, Gabriel Sabol, Danielle Whiting, and Mia Reich discuss the class project, an art exhibition, that is a requirement for the Museum Studies: Artist As Curator course they are taking. The exhibition, titled “Home,” will be held from 5 p.m. to 8 p.m., May 3, at the Origami Air Studio, 1063 Patterson Drive, Sarasota.

“The class has been a very hands-on experience for pop up art exhibits and (offers skills that can be transferred) into other kinds of exhibitions,” explained Whiting, who was the educational curator of the team and responsible for putting together the catalog for the exhibit.

The Museum Studies: Artist As Curator class is a new course this semester at New College. “Museum studies is gaining in popularity in colleges,” Loccisano said. “A lot of students want these courses because the number of new museums that are opening is increasing.

He said when he developed this course, he wanted to mix theory with hands-on experience, and that is the reason the class ends with an art exhibit the students planned and executed on their own.

“The first part of the course is all theory based,” said Loccisano, who retired in 2017, after 30 years as an art professor and gallery director at State College of Florida in Manatee County. “The exhibition project comes after all the lectures and reading the writings of museum directors.

“All this is in preparation for the exhibit,” he said.

The students also had to do three museum visits and write a hypothetical press release for each of those museums.

“I tried to get them to visit different types of museums, besides art museums,” said the accomplished artist, who has his works on commission in prestigious New York City art galleries.

Loccisano, who now lives in Montpelier, Vt., said he was asked to develop the curriculum for this class and was back in the area just to teach this course. 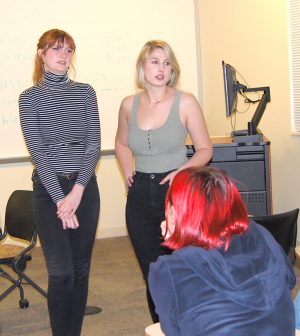 New College of Florida students Danielle Whiting, left, and Mia Reich discuss the class project for the Museum Studies: Artist As Curator course with their fellow classmates. Whiting is the educational curator and Reich is the executive curator of the project team. Submissions Coordinator Garland Hanson is seated in the foreground. Professor Joseph Loccisano, who retired from State College of Florida after 30 years as an instructor and museum director, developed and is teaching the class.

“Kim Anderson asked if I was interested in submitting a proposal for the class,” he said. Anderson is a fulltime studio arts instructor at New College.

“There was an Andrew W. Mellon Foundation grant available to pay for the class,” Loccisano said. “Kim knew my background and she thought that would be an interesting class to offer at New College.”

Loccisano had lived in Manatee County since he was 7 years old, when his family moved there from Stanford, Conn.

A 1981 graduate of Bayshore High School, he went on to earn a bachelor’s degree in fine arts, a master’s degree in humanities and humanistic studies, and a graduate certificate in museum studies.

He also trained at the Art Student League, the School of Visual Arts, and the Robert Blackburn Printmaking Workshop in New York City.

After three years as an instructor at Nova Southeastern University in Tampa, Loccisano taught studio art and academic courses, while directing the museum operations at State College of Florida for the next 30 years.

He now has a studio in Montpelier, the capital of Vermont.While it only has a population of about 8,000 people, Loccisano called it a “big, small city. There’s a lot of art in the area,” he said. “And what I love about Vermont people is their environmental and sustainability attitude.”

Since moving to the Green Mountain State, Loccisano said he has been reaching out to nonprofit organizations in Montpelier. “I’m interested in doing volunteer work with them and getting to work with the people in the community and share my skills and learn new things,” he said.

He explained that he has been in the art world most of his adult life and wanted to expand his experiences. “What I like about Vermont is that it is very clean,” Loccisano said. “And there’s a sense of enthusiasm.”

But when he was asked to develop and teach the museum studies class at New College, he said he could not miss the opportunity. “I’’ve been looking forward to creating a class like this for a long time,” Loccisano said. In preparation for the class, he spent time in New York City, researching various museums and galleries.

Loccisano said his goal was not to teach only about art museums but to develop a course that can be applied to any type of museum.

The course also included “part of my own training and education,” he said. “I wanted to offer what’s new and fresh to the students. He added, it’s a practical class where the student learns from the ground up all the nuts and bolts of being a museum director.”

The students were aware of Loccisano’s years of experience in museum management. “It’s different to get the point of view of a professor who has personal experience,” said Amanda Vorce, a junior from Vera Beach. Vorce has worked at the exhibition venue, Origami Air, and helped acquire the space for the class project.

A week before the deadline for the artists call, Garland Hanson, the team’s submission coordinator, said there were 10 submissions.

Hanson, a sophomore from Miami, said she is majoring in philosophy but is also working on a minor in studio arts.

“I always was interested in gallery exhibitions,” she said. “And it’s good to know the mechanics of art exhibition more than just the creative end.”

Reich agreed, and said the course is good for anyone who is interested in museum management. “The final project is a great opportunity to use the skills we learned (in class),” she said. “You take everything theoretical and see if it works.”