2 Road games, 2 at home before playoffs 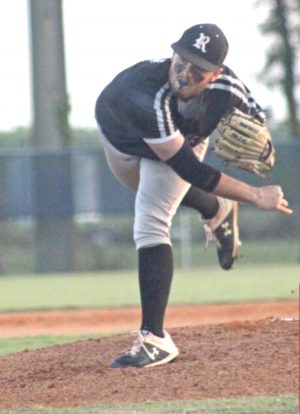 Riverview split the regular season series with Bloomingdale, claiming a district win at home last Thursday, 7-5. It was the Sharks’ fifth win in six games.

Coach Ronnie Rodriguez’s Riverview team trailed the Bulls, 3-1, going into the bottom of the third when the Sharks put a 5-spot on the board. For the Sharks, junior MacAllister Jorgenson drove in a pair of runs and senior Brendan Herrick drove in an insurance run. Senior Kyle Knees tossed 5 and 1/3 innings of relief to earn the win. Senior Ben Migliarese came in and struck out the last Bull batter to earn the save.

All four remaining games on Riverview’s schedule, prior to the playoffs, are non-district games. Included are Armwood at Seffner on April 23, and Steinbrenner at Lutz on April 25. Riverview’s last two regular season games are both at home. Alonso visits for a Saturday, 10 a.m. game on April 27. Then the regular season ends with a home game against Leto on April 30.

Riverview right-hander, Brendan “Bubba” Herrick, pitched a two-hit gem and drove in the deciding run in a 2-0 victory at Strawberry Crest on April 16. Chargers’ starting pitche, Eli Garner, worked three perfect innings before the Sharks got on the scoreboard. Jorgensen led off with a single and reached third on a one-out single by Dillon Besnier. Herrick followed with a sacrifice fly to open the scoring with what proved to be the winning run.

The Sharks added an insurance run in the sixth, when Migliarese singled and came all the way around on an outfield error. Matt Masse and Jeremy Galen also had hits for Riverview.