Lisa had a little lamb… 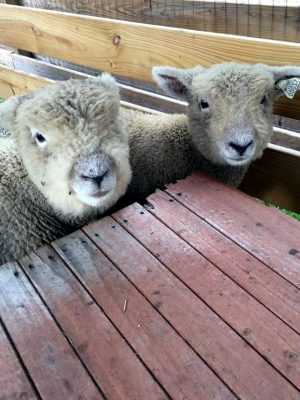 These female Babydoll lambs with teddy bear faces are part of the flock at Little Foot Farms in Balm. They are woolier than the other sheep in the herd. LISA HAST PHOTO

Lisa Hast and her husband Jason began living the country life in 2015 and, shortly after, started raising goats. The animals helped them clear their two-acre spread and qualify the land for agricultural status.

“We were goat farmers for 2 ½ years, during which we were asked to take a lamb named Sophie,” Hast said. “We fell in love with her personality, got her a boyfriend, and they started making babies.

Last year, the Hasts bought four ewes that were already bred and pregnant. Then it was time for the goats to go.

“Since they were little mischief-makers and were destroying our fencing and often escaping into the neighborhood, we decided to transition to sheep,” Hast said. “They’re so sweet,” she said of her new charges, and they sell for twice the amount we got for the goats.”

With all but two of the goats sold, the Hasts became sheep farmers. Their herd now consists of a stud they call Jefferson, eight Katadhin ewes, two registered female Babydoll lambs and a 5-year-old donkey, named Harriet, who protects the sheep. Ruger is now primarily Hast’s sidekick.

And, oh, over a two-week period this month, the flock more than doubled when the ewes delivered 12 lambs, including a set of triplets.

The adult sheep will stay on the farm, but all of the babies will be sold. Some will go to populate other farms in the area, others to petting zoos, and Minnie, one of the triplets, is going to help special-needs children in Wesley Chapel. Her mother wasn’t feeding her, so Hast has been bottle feeding her since she was born. 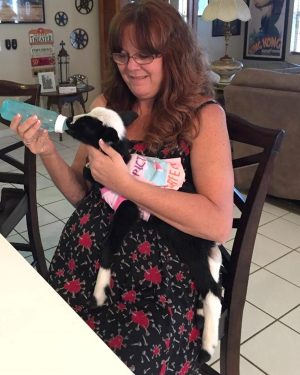 Every morning Hast rises early to spend an hour or so with her flock, feeding and watering them and spreading hay. It’s peaceful, and the animals bring her great joy.

“I enjoy helping create life,” said Hast, a partner by day in her family’s East Bay Insurance agency. “Being out here with them in the morning is my time.”

Sheep are herbivores that graze on grains and vegetation. They’re very social and most comfortable when together with other members of their flock. They tend to run if anyone or anything approaches or spooks them.

It’s hard to surprise one, though. They have a field of vision of around 300 degrees and can see behind themselves without turning their heads.

“They’re such gentle creatures,” Hast said. “There’s no drama, no upsets like when we had the goats. They’re always happy to see me.”

Two ewes and their lambs munch on a snack of corn husks on a sunny afternoon at Little Foot Farms. LOIS KINDLE PHOTO

This 2-week-old lamb will be sold to help populate other area farms or to become a member of a petting zoo.LOIS KINDLE PHOTO

Harriet, the farm’s 5-year-old donkey, joins some of the sheep at Little Foot Farms for a late afternoon snack. Harriet’s job is to protect the herd.

A pair of lambs, part of 12 born in mid-January on Little Foot Farms, stop in their tracks as someone approaches. LOIS KINDLE PHOTO

Sheep are social animals that feel most comfortable when they’re with other members of their flock.

Babydoll lambs, Laverne and Shirley, will be getting a boyfriend, named Squiggy, in May. LOIS KINDLE PHOTO

Only a couple of weeks old, Minnie takes in some sun at Little Foot Farms. She will soon be headed to help special-needs children in Wesley Chapel. LOIS KINDLE PHOTO

The Hast’s farm dog Ruger is, primarily, Hast’s sidekick now that Harriet, the farm’s donkey, is in charge of guarding the herd.