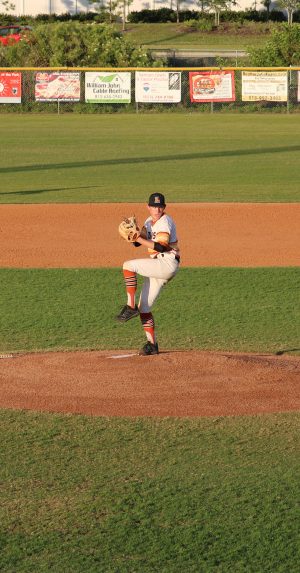 Coach Kennedy Duran’s Longhorns completed its first-ever unbeaten conference season and clinched first place in District 9. With four regular season games left, Lennard is 15-3 overall and 8-0 in district. Last season, coach Duran’s team finished 11-12 overall and 5-2 in district. This season is the first in Longhorn baseball history they have finished over .500 overall and perfect in district.

Lennard has two more games at home this week and wraps up the regular season on the road at Middleton on April 30 and at King on May 2. All four remaining games are non-conference. Then the playoffs start.

The April 25 home game with Plant City is Senior Night. Starting at 7 p.m., all Longhorn senior players who have contributed to this record-setting season for Lennard will be honored. The powerful Plant City Raiders are a shoo-in to win the District 6 regular season crown with an 18-2 overall and 7-1 district record thus far.

Last week’s latest District 9 victories for the Longhorns were a study in contrasts.

On April 18 Tampa Bay Tech made the long ride to Ruskin and the longer ride home, after suffering an 11-1 mercy-run whipping after 6 innings. TBT limps along with a 3-16 mark overall and 2-6 district.

The Horns pounded TBT, pitching for 15 hits as 10 different Longhorns joined in the hit parade. Senior designated hitter Edward Tarrant was 3 for 4 at the plate with two triples, a run scored and an RBI. Senior Evan Barnwell took advantage of his role in the starting line-up with a perfect 3 for 3 night at the dish: He walked once, scored a pair of runs, knocked in 2 runs and stole 2 bases. Junior Maxwell Goodnight also had a good night. Deuces were wild for the first baseman, as Goodnight collected 2 hits, 2 runs, 2 RBIs and 2 stolen bases. Lennard hitters with 1 hit included John Waller, Yoyo Nunez, Levi Montero, Hayden Hensley. Juniors Miguel Figueroa and Anthony Fereira each had a hit, as did freshman Sebastian Munoz. 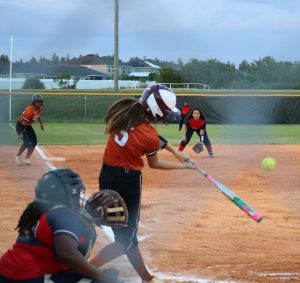 Lennard’s #5, Kaitlyn Sigmundi, slaps a single into right field to plate two RBIs in the Longhorns’ mercy-run 10-0 win over Tampa Bay Tech last week. Coach Allie Montezuma’s girls are now 10-8 overall and tied for first in the district with a 3-0 record after losing to Brandon 6-2 last week. The last 2 games of regular season are at home this week, April 23 against Durant and April 25 versus Plant City.

The early week win over another District 9 foe, Brandon, was not as much of a blowout as the TBT victory. Playing at the Eagles’ diamond, the Horns scored 4 runs in the fourth inning and were cruising to an apparent 4-1 victory until Brandon struck for 3 runs in the bottom of the seventh to tie it 4-4 and send the game into extra innings. Lennard finally prevailed by scoring 3 in the top of the ninth and holding Brandon scoreless in the bottom half to claim a 7-4 win. Picking up 2 hits each were Adrian Muñoz, Deuce Waller, Yoyo Nunez, and sophomore Alek Mangual. Edward Tarrant pitched six solid innings, coughing up only 2 runs on 2 hits, 3 walks and whiffing 13 Eagles before turning it over to Longhorn relief pitchers, with Nunez fanning three in his one inning on the mound. 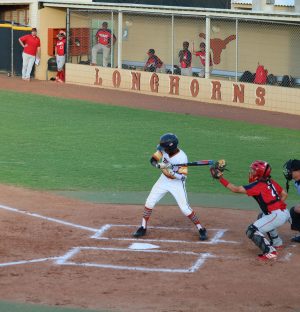 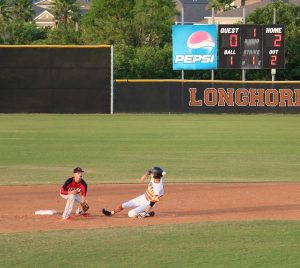 Longhorns’ senior Hayden Hensley slides in safely to steal second base in romp over Tampa Bay Tech. Lennard Senior Night is April 25 in the last regular season game at home.