An old scam, preying on the loneliness of seniors, is taking many new victims in Sun City Center. 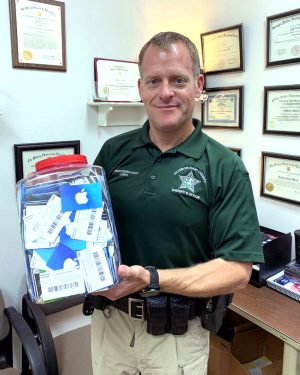 Hillsborough County Sheriff’s Office Community Resource Deputy Jeff Merry is warning area residents about the romance scam, which is particularly devastating because its victims suffer not only monetary loss but also emotional betrayal. Shown here, Merry holds a jar containing scores of gift cards scammers requested victims buy and then send them the numbers on them via text.
MICHELLE MORTIMER PHOTO

“The romance scam first appeared here about three years ago,” said Hillsborough County Sheriff’s Office Community Resource Deputy Jeff Merry. “And it has really ramped up over the past eight months.”

He said he knows of close to 30 recent victims.

“And I guarantee there are many more who haven’t figured this out yet,” he said.

All scams are designed to trick someone into giving away his or her money, but a romance scam is particularly devastating because its victims suffer not only monetary loss but also emotional betrayal.

Community Service Aide Michelle Mortimer is currently working on a romance scam where a widower sold his second home, took out three loans at three different financial institutions and depleted $300,000 from his personal account.

“At this time, I don’t know what his total loss will actually be,” she said. “For me, these are the worst cases I write. It’s so sad.”

Mortimer said the man’s family finally made him seek help.

“And it took me three separate visits to convince him he had fallen for a scam.”

Romance scammers target the elderly, primarily someone who recently lost a loved one and is lonely and needing companionship.

The criminal reaches out through a popular dating site or social media by building a profile with lots of photos, family information and so forth. He (or she) sends out phishing messages or likes Facebook posts, intending to hook someone into responding.

Once a response is received, the scammer takes the victim off site and goes strictly to text messages.

“They do social engineering research to learn everything they can about you, so they pretend to be your perfect match, your soul mate,” Merry said. “They manipulate a person into providing information to use for fraudulent purposes.”

Cultivating a relationship with constant texts over a period of several weeks, the scammer sends photos of children and grandkids and talks about personal interests, lifestyle and more.

The goal is to gain the victim’s trust and confidence.

Slowly, the scammer begins to ask for money for one of several reasons:

• He/she wants to travel to see you, but then something always comes up and he/she never shows up.

• A grandchild is sick or injured and needs medical help the scammer can’t afford. Typically, this con artist asks for a loan but never gets around to paying it back.

• The scammer requests a loan to help him/her out financially, while funds in American banks can’t be accessed. (This is usually someone posing as an American working overseas.) Again, the loan is never repaid.

These criminals often ask for gift cards that can easily be sold for cash. Or if cash is actually requested, it’s never sent directly to this individual, so the transfer of funds is extremely difficult to trace.

“The U.S. Department of Justice is now taking up and investigating these kinds of scams against seniors,” Merry said. “But they’re very difficult to solve because most of the scammers are overseas.”

As always, Merry has these words of advice:

“If you don’t know exactly who someone trying to contact you is, don’t accept a friend request or respond to a text, and if someone (like that) makes a monetary request, block the texter or unfriend them.”