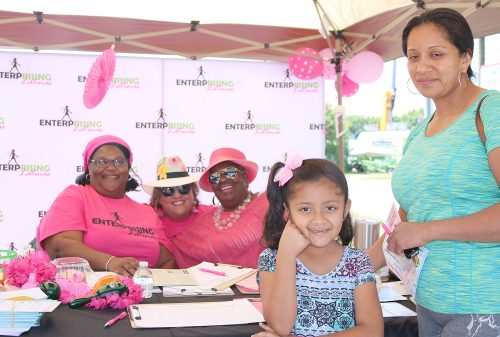 Enterprising Latinas sponsored the first annual Wimauma’s Women’s March last Saturday to convene women from the South Shore area to celebrate Women’s History Month and to honor the contributions and rights of women farmworkers. Among those attending at the Wimauma Opportunity Center were seated from left: Andrea Singleton; Liz Gutierrez, executive director of the Enterprising Latinas, Inc.; and Angela Crawford. In front at right are Maria Rosales, a cafeteria worker at Ruskin Elementary School, and her daughter Giselle Torres, a first grader at Waterset Charter School.

Enterprising Latinas Inc. (ELI) celebrated the first-ever Wimauma Women’s March to commemorate Women’s History Month and to honor the contributions of women farmworkers. Close to 100 people participated in the event on March 23 that began at the historic Bethune Park and ended at the Wimauma Opportunity Center, office of Enterprising Latinas, where participants and visitors enjoyed fellowship, food, refreshments, music and speeches. 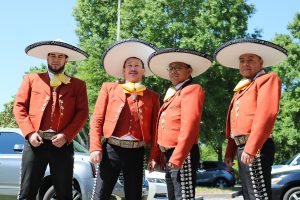 Marchers walked along S.R. 674 and later heard personal stories of farmworkers from Wimauma and Immokalee, Fla. Rosalva Serrano, a former farmworker, traveled all over the country as a child with her family picking tomatoes, cucumbers, strawberries, green beans and more. “Back then when I used to work, there were no portable bathrooms no napkins, no water, no soap,” Serrano shared. “Farmworkers also arrived early, but couldn’t start working until the tomato plants dried up, and they were not paid for that time. Now, I hear that there have been lawsuits and people are being compensated since the time they report for work, which didn’t happen back then. I’m glad that there are things like this, that you all fight for the rights of farmworkers.”
Members of the Coalition of Immokalee Workers participated in the march and also shared their experiences and their fight for farmworkers’ rights, including asking large corporations to agree to buy produce from farmers at 1- to 2-cents higher in order to fund improvements to farmworkers’ working conditions. “For so many years, we as farmworkers have been struggling for our rights, whether it’s here in Wimauma, or down in Immokalee, or other farmworkers across the state of Florida, in order to combat these abuses,” Lupe Gonzalo from the coalition said. “Whether we’re farmworkers that work in tomatoes, strawberries or other vegetables — all farmworkers have come together to fight for their rights.”
While the crowd of walkers decked out in pink walked along S.R. 674, passing drivers honked in support. As they drew closer to the end point at the Wimauma Opportunity Center, marchers were welcomed by the Mariachi Internacional band and women food vendors who have received training from Enterprising Latinas. Participants also shared in creating a “Wall of Barriers Against Women’s Prosperity,” which was intentionally knocked over by attending children signifying how boundaries like gender discrimination, unequal pay or sexual violence in the workplace need to be torn down to help continue progress for women. Liz Gutierrez, CEO of Enterprising Latinas, remarked how “as women we need to feel and ensure that we belong everywhere” by increasing skills and networks of mutual support to knock down barriers and improve conditions for themselves and their families.
Enterprising Latinas Inc.’s mission is to create economic opportunities for Latinas in Tampa Bay. The nonprofit organization offers basic education, vocational and entrepreneurial training, family support programs and community-building initiatives. Enterprising Latinas believes that when women do well, their children grow stronger, and their communities do better. For more information, call 813-699-5811 or visit www.facebook.com/EnterprisingLatinasInc/

Riverview will have another charter school

Get rid of outdated drugs