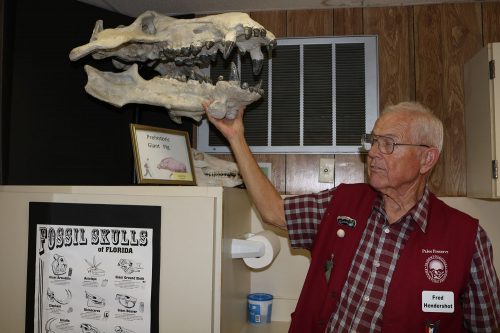 Fred Hendershot with a pre-historic giant pig skull and poster of other fossil skulls on exhibit at the museum.
STEPHEN FLANAGAN JACKSON PHOTO

By STEPHEN FLANAGAN JACKSON
Talk about a trip back through time! But this is ridiculous. A veritable Jurassic Park, albeit not nearly as old and minus the dinosaurs, right here in our own backyard in South Shore.
We are not talking about 100 years ago when orange groves flourished on this very site of loamy soil near the banks of the Little Manatee River. We are not even talking about 80 years ago when an old-fashioned trailer park was home to many residents on this same patch of land on the east side of 24th Street Southeast near the Little Manatee River in Ruskin. 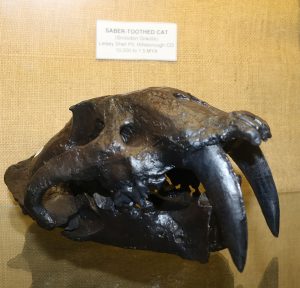 A skull of a saber tooth cat, one of many pre-historic animals discovered at the Leisey Shell Pit and exhibited at the Paleo Preserve Fossil Museum.

In fact, none of those previous land users had any idea that their habitat was once shared by strange and exotic animals such as saber-toothed cats, mastodons, giant sloths, mammoths and other prehistoric animals of the early ice-age some millions of years ago. Actually no one in this neck of the woods or anyone in the scientific realm of prehistoric studies knew that only 6 miles from the Ruskin Library about 1- to 2-million-years ago many Pleistocene mammals trod these environs. Some short 40 years ago, scientific history was changed when the world’s greatest collection of Pleistocene fossils was unearthed only a long oyster-shell’s throw from Beanie’s Bar & Sports Grill on U.S. 41.
Fred Hendershot, now the chief curator at the Paleo Preserve with the recent departure of Frank Garcia to the Dakotas, is quick to point out that The Paleo Preserve Fossil Museum harbors remains of the age of mammals not the age of dinosaurs. “Florida is far too young for the Jurassic period, the dinosaur age of 65 million years ago,” according to Hendershot, pointing out that the peninsula we now refer to as Florida did not emerge from the oceans until about 25 million years ago, according to many paleontologists.
It’s a wonder the importance and the significance of the Leisey Shell Pit was not discovered and recognized until the late 1970s. That’s when Frank Garcia and amateur fossil collectors were searching the spoil piles of oyster shells and other fossils in a pit or mine owned by the Leisey family of Ruskin. The Leiseys mined the sand and seashells to make concrete and other building materials for use in construction. There are no stones in Florida! 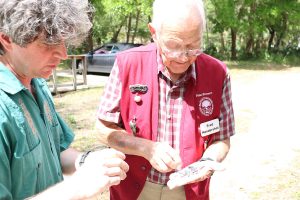 Paleo Preserve curator Fred Hendershot, right, and visitor Jesse S. Jackson sift through shells and fossils at a digging mound next to the museum. Note top to bottom on Hendershot’s vest: agatized coral, the Florida state stone; a pillowed sand dollar, the Florida state fossil; and a shark’s tooth fossil

One day, Garcia came upon a wall of fossils that had probably accumulated there through a combination of river and tidal action near Tampa Bay. Following Garcia’s discovery of this rich fossil site, professional paleontologists swarmed to the site in the early 1980s. Over 50,000 fossils were excavated in about a decade, providing valuable information about the early Pleistocene era.
The Leisey family ceased, in 1992, mining sand at this site, and there was no need to keep operating the pumps. The site is slightly below sea level, and much of the area was flooded.
The Leisey Shell Pit became one of the most celebrated finds on earth. Even now, the Paleo Preserve is unique in the study of paleontology because it opens a window to the creatures of the early ice age, millions of years old. The Leisey Shell Pit featured remains of such Pleistocene mammals as the saber-toothed cat, the horse, the llama (camelids), giant tapir, giant ground sloth, peccary, giant armadillo, glyptodont, mammoth and mastodon, all of which were unearthed, according to Hendershot. Also, in addition to the mammals, reptiles such as the giant tortoise and birds such as the “Leisey Condor” were found here.
This important dig that took place intermittently from 1983 until 1992 could not have been possible without the cooperation of many. Frank Garcia, Eric Hunter and Page Youngblood were instrumental in bringing attention to the discovery of fossil bones in the pit. Bud Leisey Jr., Kim Leisey, LeAnn Casey and William W. Casey, along with their employees, supported the excavations with heavy earth-moving equipment, storage trailers for fossils and funds for supplies. The Leisey Shell Pit dig in Ruskin brought together many avocational and professional paleontologists who volunteered their time in the hot sun. This alliance gave rise later to the Tampa Bay Fossil Club (TBFC). You can visit the club online at tampaBayFossilClub.com. 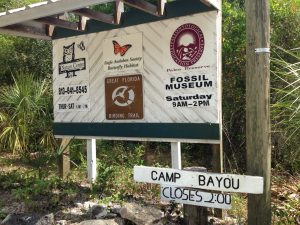 Paleo Preserve curator Fred Hendershot, right, and visitor Jesse S. Jackson sift through shells and fossils at a digging mound next to the museum. Note top to bottom on Hendershot’s vest: agatized coral, the Florida state stone; a pillowed sand dollar, the Florida state fossil; and a shark’s tooth fossil

Hendershot is a field trip director for the TBFC. “Our goal is to teach Floridians and visitors about the prehistoric creatures and people that were here long before us,” exclaimed Hendershot. “You do not have to travel to faraway, exotic places to find these fossils. Mammoths, giant cats, wolves, camels and even rhinos lived right here where we live today.” The TBFC is a family-oriented organization focusing on paleontology, archaeology and everything prehistoric. Meetings are held monthly at the University of South Florida’s Tampa campus and feature programs on topics of science and nature.
In Ruskin, Frank Garcia started the Paleo Preserve Museum about 20 years ago to share the fossil discoveries with children and the public. The museum is in the Camp Bayou Outdoor Learning Center and is open on the first, third, fourth- and fifth Saturdays of each month from 9 a.m. to 2 p.m. The Paleo Museum would like to expand its hours but is in dire need of volunteers to do so. Any interested volunteers should call Hendershot at 813-892-5864. He promises no expert knowledge is needed. You will be trained to provide the 50-cent tour.
The Paleo Preserve offers a variety of interactive experiences for schools and groups throughout the year. These include a “hands-on” dig experience and/or a “river dig.” Participants discover and keep the fossils they collect.
“You can also have an educator come to your school or location to present a program on the Paleo Preserve,” said Hendershot. “We will bring with us a ‘mobile museum’ of fossils.”
Or if you want to give someone a special birthday party, bring your child to the Paleo Preserve for a Paleo Party, suggested Hendershot, adding the fossil and mineral shop within the Paleo Preserve museum offers numerous, interesting and modestly priced items, and picnic lunches can be enjoyed at the outside pavilion.

FunFest was all that!