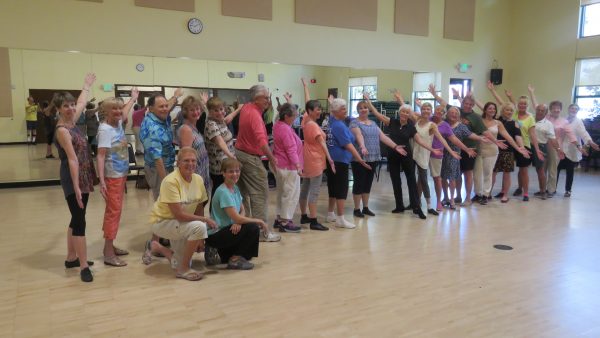 Performances of Sun City Center’s Follies 2019 are scheduled for 7 p.m. April 5, and 1:30 and 7 p.m. April 6. From left, kneeling: Linda Stone, assistant director and Diane LeFrancois, director and choreographer of the chorus routines, shown with the performers. BILL HODGES PHOTO

The Follies has drawn South Shore’s musical and theatrical talent to Sun City Center for over three decades. The first Follies show was in 1984.
With a theme of “Anything Can Happen,” this year’s ensemble production features dancers, singers and actors in 25 fast-moving segments. Tickets ($14) are on sale now for three performances in the Kings Point Veterans Theater on Friday, April 5, at 7 p.m. and Saturday, April 6, at 1:30 and 7 p.m. The box office in the KP North Club is open 8:30 a.m. to 4 p.m. Monday through Friday. The address is 1900 Clubhouse Drive.
Diane LeFrancois, who has been chorus choreographer for four years, stepped into the director role for Follies 2019. She is filling the supervising and managing spot that Rose Ostrander held for 30 years before moving from SCC last year. “When someone is here that long and so many performers are involved, the transition, as expected, has been challenging,” LeFrancois said. She heaps praise onto Linda Stone, assistant director, and calls her the “detail person who who keeps the performers organized.” Stone has been involved with the Follies for eight years.
Theater has always been important to LeFrancois. Even though she works full time at a Brandon pediatric dental practice, she finds time to be involved. She joined the Pelican Players soon after moving to SCC 18 years ago and was also part of the Performing Arts Club. She has been instructor/choreographer for the SCC Jazzmatazz Dance Club for 12 years. “You escape life’s everyday issues when at the theater. As an actor, you can live the life of someone else or you can enjoy the life of others as a ‘theater goer,’” she said.
The Follies are fully managed by volunteers from throughout the area. For example, sound and lighting handlers are Brandon’s Keith and Carlyn Postle who have been involved since 1997. LeFrancois said she is grateful the Postles are returning; they are invaluable in ensuring that the performers have what they need when they need it.
Among the 100-plus follies performers will be a new group of eight, the Riverside Illusionists from the Riverside Golf and Boating Resort, who have been drawing chuckles and awe from area audiences with their comedic dance routine.
A host of vocalists and dance groups who have previously participated are returning, including the Sounds of Time, a popular dance group from East Bay High School. Bill Barker, an area favorite who made his first appearance in 2001, will be on hand to sing a medley from Man of La Mancha. Barker was also selected to read a Follies tribute to John Cortese, another loyal Follies supporter/performer who died in January this year.
“‘Anything Can Happen’ showcases talent of the area’s best and brightest,” said LeFrancois. “Follies 2019 is going to be a great show!”