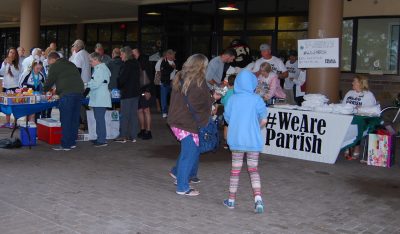 More than 100 people attend the tailgate party at the Bradenton Area Convention Center in Palmetto prior to the Manatee County School Board meeting Feb. 25.

The Manatee County School Board voted 4-1 on Feb. 26 to rename a new high school under construction on the southeast corner of Erie Road and Martha Road near Parrish.
The school, scheduled to open in August with freshman and sophomore classes, will be called Parrish Community High School.
“It went like I hoped it would,” said Gretchen Fowler, president of the Parrish Civic Association, the day after the school board meeting held at the Bradenton Area Convention Center on Haben Boulevard in Palmetto.
Fowler led a petition drive to have the school renamed after the community of Parrish.
The school board voted in August 2017 to name the school North River High School, but the petition and Parrish residents showing up at board meetings and workshops following that vote convinced the board to go through the process of renaming the school.
“People were really opposed (to the North River name),” Fowler said. “We went to meetings and told them we were not happy.
“We started the pressure to change the name,” she said.
Fowler said about 300 people were at the Feb. 26 meeting, which was held at the convention center instead of at the Manatee County School District building because of the expected larger crowd.
School board member Charles Kennedy voted against the name change.

The Manatee County School Board voted Feb. 25 to rename the school under construction on Eire Road in Parrish, scheduled to be opened in August, the Parrish Community High School.
CARL MARIO NUDI PHOTOS

“I was surprised at Charles Kennedy’s response,” Fowler said, “He suggested North River Parrish High School and was the only dissenting vote (for Parrish Community High School).
“I can understand because the people who were against the name are in his district,” she said.
Those who spoke against having “Parrish” in the high school’s name said it was because of history, according to Fowler.
News reports said the local branch of the NAACP had a problem because an ancestor of the man for whom the town was named, Crawford Parrish, owned slaves in another Florida county.
“There were about four speakers against the name,” Fowler said. “Everyone else pretty much was in favor.”
Prior to the 5:45 p.m. school board meeting the Parrish Civic Association held a tailgate party in front of the convention center.
“(Manatee County) Commissioner (Priscilla) Trace came up with the idea of holding a tailgate party,” Fowler said. “She said it would show our appreciation to the community for their support and besides people will have to feed their family (sic) at that hour, so we need to have something to eat.”
More than 100 people enjoyed the Parrish Civic Association hospitality, and many wore shirts or carried signs with #WeAreParrish printed on them. 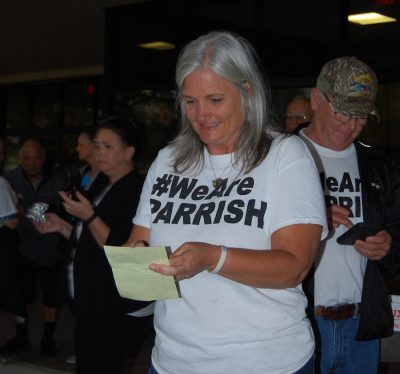 Parrish Civic Association President Gretchen Fowler checks her notes at the tailgate party at the Bradenton Area Convention Center in Palmetto prior to the Manatee County School Board meeting Feb. 25.

A school district press release read: “The School Board initiated the renaming process during a workshop held on Tuesday, August 21, 2018, after a substantial number of citizens mounted a campaign to have the name changed to Parrish High School.”
The board followed its policy for changing the name of a school, which states that the community needs to be involved in the “deliberation, discussion and debate” for a period of at least six months prior to taking a vote.
At a school board town hall meeting held at Buffalo Creek Middle School on Oct. 24, more than 100 people showed up to discuss the renaming of the school and to offer name suggestions.
During the six-month period the people also submitted names for the new school by email, regular mail, or personally delivering them to the school district offices.
People also were able to offer name suggestions at the Feb. 26 meeting.
The board had 40 names to consider prior to the vote.
Many were the names of local individuals who were civic leaders, such as Ada C. Bilbrey, Carl Weeks and David Bailey.
Some were of people of national importance, such as Thomas Jefferson, Neil Armstrong and President Donald Trump.
Schooly McSchoolFace was offered as a light-hearted suggestion.
The remaining nominations were of a location or area of the county, including North Palmetto, Erie, Fort Hamer and Riverside.
The first name the school board picked in 2017, North River High School, received 97 nominations.
But there were 12 nominations with some connection to Parrish, with Parrish High School receiving 3,117 nominations, many from the petition Fowler and the Parrish Civic Association started.
In the end, the school board added “community” to Parrish High School, avoiding the confusion of two Manatee County high schools having the same initials, PHS, as Palmetto High School has been referred to for many years.
“(School board member) Rev. (James) Golden said he heard two things during the meeting,” Fowler said. “The words ‘community’ and ‘Parrish.’”
In the end, the board voted to rename the school Parrish Community High School, which has the initials PCHS.
For more information about the Manatee County School District, visit its website at www.manateeschools.net.
And to learn more about the Parrish Civic Association go to its website at www.parrishcivicassociation.com, or on social media at www.facebook.com/ParrishCivicAssociation/

FunFest has it all