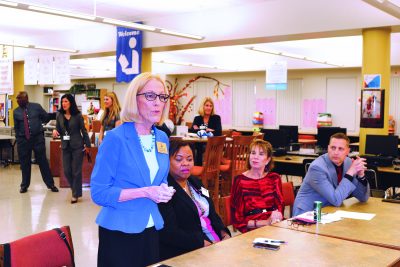 More people, more houses, more developments, more students, more vehicles, more traffic, and a new public high school are on the way to east Hillsborough County.
About 35 parents, students, teachers, and staff from Lennard High attended a meeting with Hillsborough County School Board (HCSB) member Lynn Gray last week to discuss the challenges with the new school and the burgeoning changes in the South Shore area. Hillsborough County Public Schools Superintendent Jeff Eakins attended, remarking that he recalls about 11 years ago when Lennard opened it had about 700 students. “Now at 3,000 students, Lennard is over capacity and the largest school in our district,” said Eakins.
Gray and Eakins were accompanied by HCPS Chief Diversity Officer Minerva Spanner-Morrow and other staff from the central office in Tampa. Parents and community members were informed about boundary changes for the upcoming new high school, health initiatives, parent support, safety issues and diversity at Lennard High. Also attending were several of the international students at Lennard.
Discussion at the meeting at Lennard in Ruskin revealed that the low impact fees paid by developers of subdivisions in Hillsborough County must be increased so developers pay their fair share for the expenses related to schools, road, and fire stations since “developers are putting more people here and need to pay more.”
One cure, or at least some relief, for Lennard’s full house will be the construction of a new high school. As of yet unnamed, the new high school is anticipated to open August 2020 on the north side of C.R. 672, also known as Balm Road, and east of U.S. 301 in an area currently under heavy construction for housing and roads. The new school, referred to by the school board for now as “TTT,” is being designed to provide space for new growth in the area. “TTT” is expected to offer some relief to East Bay High School and certainly to Lennard High School. The new school proposal also includes minor adjustments to the southern portions of the Newsome High and the Durant High boundaries, which include areas closer in proximity to the new high school site. Hillsborough County has discussed plans to widen Balm Road (C.R. 672), but currently the road project is not funded nor has there been any word on the timing of when the county will widen it.
The new high school will open initially with only grades 9-11, no grade 12. Students currently in the ninth grade at Lennard, East Bay, Durant, and Newsome will be affected when they are entering grade 11 in August 2020, depending on where they live.
A portion of the new high school will be used temporarily as a middle school to relieve an overcrowded Beth Shields Middle School in Ruskin, which is grades 6-8 with approximately 1,368 students currently. A new middle school is also being planned for the near future. Once that new middle school opens, the temporary space in the new high school will convert back to high school space, which is needed in that area.
Gray was elected to the Hillsborough County School Board, representing countywide District 7, in 2016. She is one of seven members responsible for making policy decisions and overseeing a total budget of $2.9 billion for the eighth largest school district in the nation, which is also the county’s largest employer with more than 24,000 employees.
Gray was a teacher and instructional leader for 26 years in Hillsborough County. Her educational highlights include being named Teacher of the Year and Peer Counselor of the Year. She spent 16 years as an instructor and department head in Hillsborough County Public Schools, nine years of instruction and department head at Jesuit High School and three years as a part time adjunct instructor for JMJ of Tampa Bay Homeschooling. She taught AP U.S. History, Advanced U.S. History, Psychology and Global Studies for ninth through 12th grade.
Gray also owns her own business called Take…The First Step, and is president of a nonprofit children fitness advocacy club called: Take…The First Step Club. She enjoys gardening and sewing and is a long distance runner. She is a strong advocate for building student relationships, early and continuing literacy education, plus an increased emphasis on physical wellness. Gray is part of the Healthy Start Coalition and belongs to the Arts Council of Hillsborough County.