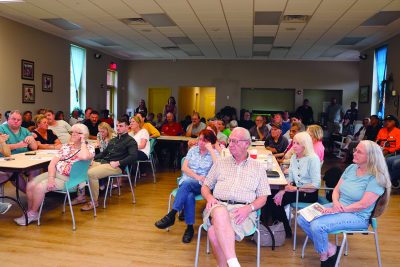 A large crowd of Gibsonton residents showed up at Gardenville Recreation Center for the meeting called by the Concerned Citizens of Gibsonton to discuss issues with Hillsborough County Commissioner Sandra Murman. STEPHEN FLANAGAN JACKSON PHOTOS

Murman: Solutions depend on money and time

Hillsborough County Commissioner Sandra Murman and an entourage of county bureaucrats from Tampa fought the afternoon traffic jams coming and going to Gibsonton last week to address concerns of a standing room only crowd at the refurbished old schoolhouse at Gardenville Park. The meeting was called by the Concerned Citizens of Gibsonton, but open to the general public as well. 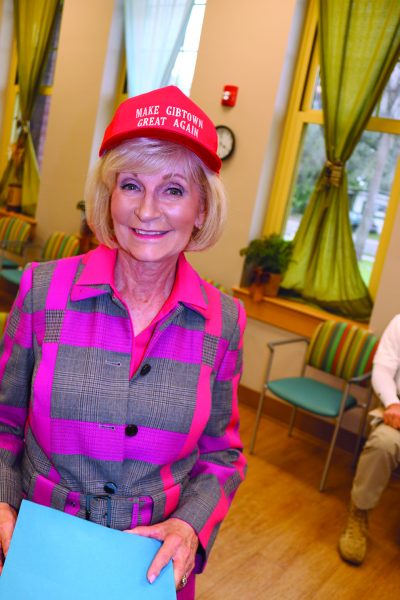 The old adage says the squeaky wheel gets the most oil. In this case, Gibsonton residents did a lot of “squeaking,” but it remains to be seen when and if their concerns will get the “oil,” in this case the money and the prompt attention from the county to address numerous trouble items identified by various Gibsonton residents. Murman, who represents District 1, which includes Gibsonton, told the 100 or so in attendance that taking care of their concerns depends on the county budget. She also reminded her constituents that “I am only one commissioner out of six” WHO make decisions regarding projects, priorities and spending.
Incorrigible traffic problems, poor road conditions, overbuilding of subdivisions, low impact fees paid by developers, flooding problems, unkempt drainage ditches, poor street lighting, lack of a public sewer system and a lack of fire and rescue personnel topped the long list of complaints by a variety of residents.
According to longtime resident Lee Stevens, “All in all, it was a pretty good meeting. I think it helped clear up the communication and understanding about the RSB (Residential Show Business) code, which is now grandfathered and not granted to new property owners,” adding that a modified show business code now exists.
“Commissioner Murman has always shown concern for us here in Gibtown. She has always been an advocate for show people, for the outdoors people, the pro wrestlers and others who live here on a transient basis. However, you must realize that the government is slow to take action. Some of these same problems will probably still exist after I die,” he said after the meeting. 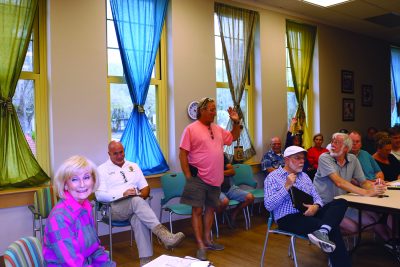 Stevens has lived in Gibsonton about 42 years where he is an independent concessionaire. He is a previous “honorary mayor” and the incoming 2020 president of the Showmen’s Club. He has been a two-time president of the Showman’s Shrine Club and also produces and emcees the annual fundraising circus in Gibtown.
“I moved here years ago because I was allowed to live here,” commented Stevens, “with my various vehicles and animals, unlike in Sarasota.”
Some of the specific problems identified by Gibsonton residents and the brief responses from Murman or county officials were:
• Gibsonton Drive from Lula Street to East Bay Road needs better and more illumination. From U.S. 41 to East Bay Road there are only 12 street lights and they are all old with sub-standard bulbs. A similar problem exists on the short distance between Lula and U.S. 41.
RESPONSE: TECO has a five-year plan to update all street lights to LED. Requests from citizens for new street lights can be evaluated by the county Traffic Division.
• In the same stretch of Gibsonton Drive as mentioned above, the white stripes on the pavement delineating the lanes are faded and difficult to see in the poor lighting at night.
RESPONSE: The county Resolution Unit can put in a request for refurbishment of striping after contact from a citizen.
• The drainage ditches alongside the streets are nearly all in very bad shape, of varying depths and low spots, and grown over with grass. Water stands in puddles in the ditches even when it has not rained for awhile. Gibsonton, especially on the west side of U.S. 41, consistently has a bad mosquito problem.
RESPONSE: Citizens can contact the county Resolution Unit to determine locations and have the county Maintenance Unit evaluate the problem ditches.
• There is a lack of infrastructure to support projected development on Symmes Road. This street is too narrow to support the amount of traffic it bears, and there are more housing developments, in addition to the ones there, projected for Symmes Road.
RESPONSE: The county Public Works is currently conducting an evaluation of the Symmes Road corridor from U.S. 41 to U.S. 301 to identify any operational improvements that can be made to alleviate congestion. Also, Public Works is including the intersection of Symmes and East Bay Road for evaluation as potential intersection improvement is developed with the new transportation surtax work plan.
• What is the status of the widening of U.S. 41 through Gibsonton?
RESPONSE: Public Works will reach out to FDOT (Florida Department of Transportation) for information.
• What is the status of the development bounded by Gibsonton Drive and Nundy, and Gloria and Alafia Street (on the new Castleberry Woods Street)?
RESPONSE: Referred to Community Development Services.
A number of issues were also identified by Buddy Harwell, a member of the Concerned Citizens of Gibsonton and a longtime businessman in the area. Harwell’s ongoing concerns and the responses provided are:
• Speed humps exist on the south end of Lula Street. Speed humps are needed on the north end of Lula Street.
RESPONSE: The county has not received any previous requests for speed bumps on this road. The county Traffic team will provide information on its Residential Traffic Calming Manual to Harwell.
• Maggie Street located next to Harwell’s shopping center at 11126 U.S. 41 needs a stop sign because speeding here is a problem.
RESPONSE: The county needs more information on this. The Customer Resolution Unit will attempt to determine the location of this request.
• Harwell pointed out that commercial businesses up and down U.S. 41 are hurting because they cannot hook up to the county sewer system.
RESPONSE: Referred to county Public Utilities.
• Harwell expressed problems about County Code Enforcement officials citing seasonal residents for RSB (Residential Show Business) code issues while they are out of town working.
RESPONSE: Referred to Code Enforcement.
• New development and unfinished sidewalks in several areas along U.S. 41 and along Symmes Road.
RESPONSE: Referred to county Public Works and Development Services.
Hillsborough County officials attending the meeting included: Murman; Jeffrey Huggins, Murman’s Legislative Aide; John Lyons, Infrastructure Administrator, Transportation/Utilities; Leland Dicus, Manager of Engineering Services; Camille Knox, Public Works Community Relations Coordinator; George Cassady, Director of Public Utilities, Water/Sewer; Adam Gormly, Director of Development Services; and Jon Paul Lavandeira, Code Enforcement Division Director.
The Observer News was the only news media attending the meeting.