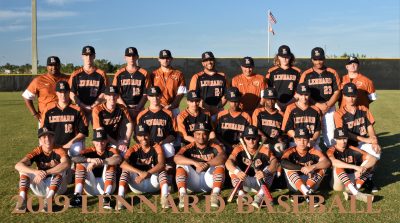 The Lennard Longhorns head baseball coach Kennedy Duran has his squad ready for another improved season this spring on the diamond — and also off the field.
According to Duran, “I am honored to serve my 12th year at the helm as the Longhorn’s only head coach in the program’s history. I want to welcome parents, alumni, the student body and our great South Shore community to come out and support our remarkable young men.”
Lennard has steadily improved since that first season of baseball for the new high school in the 2006-07 season when only eight students showed up for the first tryout. The Longhorns won none and lost 22 in that inaugural season for the sport and also the high school. Now, 35 players are in the varsity and junior varsity program, and the Longhorns are ready to make some noise in 7A District 9 diamond play this season. 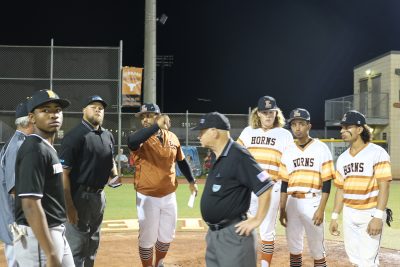 Coach Kennedy Duran is pictured in the center (orange shirt) at a home plate conference with umpires and players.
STEVE JACKSON PHOTO

Duran has sent several Longhorns on to play college baseball at various levels from Division I to NAIA. One player, Jackson Tetrault, became Lennard’s first MLB draftee, picked in the seventh round in 2017 by the Washington Nationals and now pitching in the Nationals minor league system.
Duran was born in the Dominican Republic and moved to New York at the age of 13 where he graduated from North Rockland High School in Thiells, N.Y. He was a three-sport letterman in high school in football, wrestling and baseball. He played in college at Cortland State University of New York from 1993-96. Duran had a stint in the New York Mets organization, playing briefly at Kingsport, Tenn. and at Pittsfield, Mass. He graduated from Cortland State in 1998, earning a Bachelor of Arts in Physical Education. Duran also went on to receive a master’s degree in Health Education from Eastern University in Philadelphia in 2002. He also coached baseball at Eastern where three of his players were drafted by the MLB. Duran and his wife Miriam, also a teacher, and a 1998 graduate of LaSalle University, live in Riverview with their two daughters: Isabella, 16, and Kayla, 12.
Duran is a baseball coach, but also a mentor whose interests go beyond the won-loss record.
“Our short- and long-term vision is of a baseball team that values building trust, honesty and accountability and can get the job done mentality. This mindset combined with our current team talent hopefully can carry over into wins,” commented Duran recently.
The veteran coach expects all aspects of the Longhorns game to be improved in 2019 by the experience gained last year and the additions added to improve certain areas. Team pitching should be the strength of the program along with strong defense, offered Duran. He also expects situational hitting to be much improved and anticipates more hitting depth as a team.
In addition to throwing, catching and hitting, Duran is a firm believer that the purpose of the Longhorns baseball program is to accomplish three objectives.
“First, we expect to have a part in helping Lennard High School achieve its primary goal of reaching, teaching and preparing graduates for a life of purpose. We will accomplish this by representing our school with, respect, pride and veracity on the field and in the community.
“The second purpose of our baseball program is to help young men achieve their dreams in the classroom, on the field and in life.”
It does not end there for the philosophy of Duran. “The third and final purpose of our program is to make our community a better place one player at a time. The second and third purposes will both be achieved in the same way: By teaching our players to value education, character, integrity and work ethic,” added the committed mentor, before declaring “Hook ’Em Horns!”

Let’s have some fun!