SCC’s first church is for sale 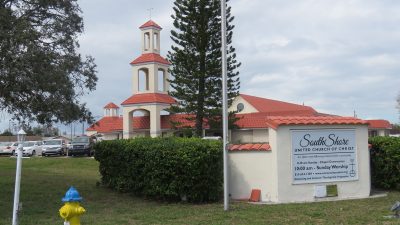 BILL HODGES PHOTO
The SouthShore United Church of Christ congregation has elected to sell its church in Sun City Center. In seeking a new location, their focus is on broadening the church’s South Shore presence and becoming a multi-generational outreach.

Yes, the T’s have been crossed and I’s dotted on listing documents and a price set at $3.1 million. The SouthShore United Church of Christ (SSUCC) has confirmed that the congregation has voted to move worship services elsewhere and is selling the property on the corner of LaJolla Avenue and N. Pebble Beach Boulevard. Michael Moriarty, Century 21 Realtors, is handling the sale.
Formerly United Community Church, SSUCC has been a community landmark for 55 years. It holds the distinction of being the first church established in Sun City Center. The name was changed in 2017 to reaffirm its denominational affiliation with the United Church of Christ.
The church had its spiritual beginning in home Bible-study groups soon after the first residents moved into their new homes in 1962. When they outgrew the homes, they gathered in the Town Hall (Community Association Central Campus). They built the church and Dr. Robbins Ralph, superintendent of the Florida Conference of the United Church of Christ, preached the first sermon there December 13, 1964.
“Over the years as other denominations established churches in Sun City Center, it lessened the need for a community-wide, nondenominational church,” said Mary McCombs, who chairs the marketing committee and is now serving as secretary of the steering committee. “The congregation has grown into being a much more progressive voice, becoming a strong member of the United Church of Christ Western Florida Conference. On Jan. 28, 2018, the congregation adopted a new mission statement, a new vision statement and an open and affirming statement reflecting its policy of expansive inclusion.”
She said that in examining the process, it became very clear that the present structure does not suit the needs of the congregation, in size or exact location. The plan is to reinvest in a new facility in a higher visibility area that will allow SSUCC to continue to serve Sun City Center, while broadening the church’s South Shore presence and becoming a multi-generational outreach.
The congregation’s decision has some yet unresolved aspects. One is the Community Church College, an adult outreach program that serves the local community and surrounding South Shore area. The church has provided classrooms, administrative space and other services to the college since 1976. “The college is a community service, and we hope they can continue to operate at a different location under another 501(c)3 organization. We wish them well,” McCombs said.
The Steering Committee is also studying options for a temporary worship space and when a move might occur. The most likely location is the Beth Israel Jewish Congregation of SCC at 1115 E. Del Webb Blvd. as SSUCC has always maintained a strong relationship with the congregation. For 13 years in the ’80s and ’90s the synagogue held weekly worship services at the church before building their own facility.
Sun City Center Community Association President Sam Sudman says that the CA Board of Directors recognizes this is a prominent piece of property near the CA Central Campus, and a due diligence study is underway to determine any interest the CA might have. He was quick to say, however, that a purchase of this magnitude would include input from the CA membership.

Computer help with seniors in mind