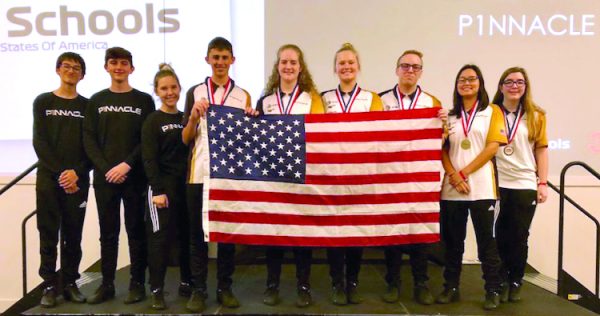 By CARL MARIO NUDI
Students from three schools in Manatee County stepped up their game and captured the Formula 1 in Schools National Championship title Feb. 23 after three days of competition at the Circuit of the Americas venue in Austin, Texas, home of Formula 1 Racing.
The win qualifies the Pinnacle Racing team for an invitation to the Formula 1 (F1) in Schools World Finals later this year.
“All of the hard work over the past few months really has paid off, and we are very proud of our team,” said Jaye Kendzior, 16, a Southeast High School sophomore and team manager in a press release statement. “The car scored perfectly and ran great, and we felt prepared and confident for our presentations and interviews.”
Besides Kendzior, the Pinnacle Racing team includes Jaxson Bunes, team design engineer and a freshman at University of South Florida (USF); Elizabeth Casadonte, team enterprise support and a freshman at Southeast High; Eleanor Hopkins, team graphic designer and a freshman at Palmetto High School; Arianna Longo, team enterprise resource manager and a freshman at Palmetto; Abbygale Owen, team enterprise social media manager and a junior at Palmetto; Hunter Raley, team manufacturing engineer and a sophomore at Palmetto; Sammy Slovak, design/manufacturing support and a sophomore at Palmetto; and Hayden Simon, team enterprise support and a sophomore at Southeast. 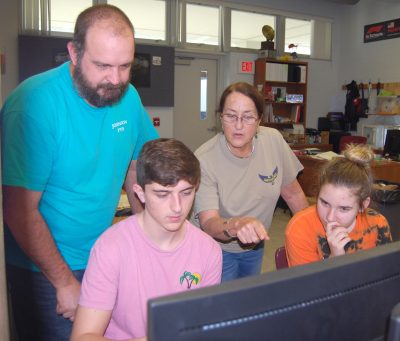 The team also won a host of contingency awards including Best Engineered Car, Best Verbal Presentation, Best Enterprise Award, Most Innovative Thinking and the Scrutineering Award.
The team’s advisors were Brian Kendzior, career and technical education teacher at Palmetto High School and Margi Nanney from Florine J. Abel Elementary School.
In an interview prior to the competition, Kendzior said she thought the team was “going to do pretty good at the nationals.”
Team design engineer, Bunes, also was confident the team would do well in Austin.
“We made changes in the kinds of wheels and wheel assembly bearings and the position of wings,” he said in an interview before leaving for the competition.
Bunes was a member of last year’s team, Perspectives, which came in second in the nationals and third in the world competition in Singapore. 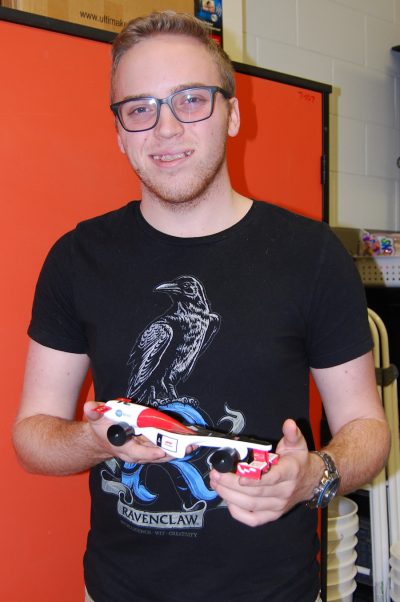 CARL MARIO NUDI PHOTO
Pinnacle Racing Design Engineer Jaxson Brunes, a freshman at the University of South Florida holds the F1 model car before its final paint job about two weeks before leaving for the F1 in Schools National Championship in Austin, Texas.

“We did testing this year on the wheels and wings because last year we tested the body,” Bunes said. “We thought we can gain an advantage on time with the improvements.”
Formula 1 in Schools is a global STEM program where teams of students ages 9 to 19 compete in designing and building, then racing miniature compressed-air-powered cars modeled after the Formula 1 auto racing car style.
The teams also must work together to plan and construct a “pit” display, demonstrate social media and marketing skills, create a 10 minute verbal presentation and produce enterprise and engineering portfolios describing their F1 in Schools journey.
“There’s many skills you gain in the Formula 1 in Schools program,” said Kendzior. “Not just engineering and entrepreneurship.
“Like there’s the teamwork aspect,” she said. “Working together and being productive and getting something done.”
As team manager, Kendzior, was responsible for determining schedules for when the team worked on projects, what needed to be completed, and who is responsible for doing the different jobs.
She got involved with Formula 1 in Schools because her family has been involved in the program for a long time.
Her father Brian Kendzior, a technical instructor at Palmetto High and one of the two advisors to the Pinnacle Racing team, started volunteering with the Formula 1 in Schools program in 2013 when another daughter, Merritt, at Southeast High competed.
“I was just a dad who got involved because my daughter was on the team,” Brian said. “In 2014 I went to Abu Dhabi (United Arab Emirates) with the team to observe.”
In 2015 Manatee County School District hired Brian as an engineering teacher at Palmetto High and he began to promote the F1 in Schools program there.
“Getting students involved was difficult at first because nobody had any idea what it was about,” he said.
Informing the students about the program became Brian’s mission.
“Brian talked to all his classes,” said Jaxson, who was on last year’s team. “He held informational meetings often.
“When the teams came back with trophies people realized it was a big thing,” he said, “but we’re still working to get people involved.”
Although F1 in Schools is an elementary, middle and high school-based program, Bunes, a USF freshman studying chemical engineering, was eligible to compete again this year because he was under 19 years old and did not age out of the program. 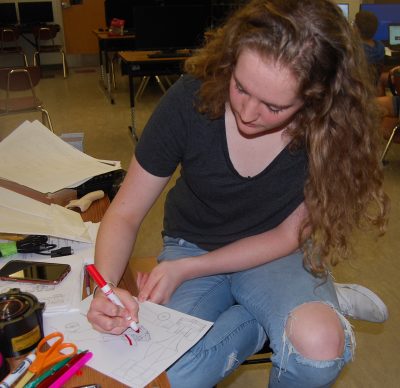 Pinnacle Racing Team Manager Jaye Kendzior, a sophomore at Southeast High School, works to get ready about two weeks before leaving for the F1 in Schools National Championship in Austin, Texas.

He said competing in the program was a challenge.
“We have to build a Formula 1 team, pick a name, design a logo, choose colors, work social media and marketing,” Bunes said. “Then there’s the engineering.”
The F1 in Schools racing car is a 1/20th scale model of a Formula 1 racing car and must comply with 43 pages of specifications on weight, the minimum and maximum size, and specific materials.
It must contain a virtual cargo or trapezoid form, within its design, which has a specification of size, shape and location that all Formula 1 model cars must include.
“This places a difficulty in the overall design,” Bunes said.
Having strict specifications for the model cars give the teams a sense of the scope of work required for Formula 1 racing cars.
The main body is milled on a Computer Numerical Control (CNC) machine from the high density foam block obtained from F1 in Schools in the United Kingdom, according to Nanney.
Four 3-D printed parts of polylactic acid or PLA plastic are attached to the car, the nose wing, two wheel supports and the rear wing, she added.
“The wheels are designed by our manufacturing engineer and machined by Design Engineer under the guidance and mentorship of our collaborative partner, Dillon Machining in Sarasota,” Nanney wrote in an email.
The Pinnacle Racing team car weighed 50 grams and was named the P1-1G.
At the competition, the team’s scaled, compressed air powered race car ran the 66 foot purpose-built track in 1.14 seconds.
Nanney got involved with the F1 in School program when her son Mark was in middle school. 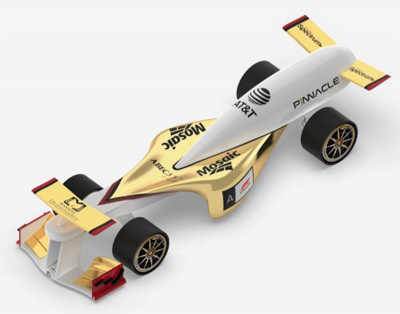 PHOTO PROVIDED
The Pinnacle Racing team took first place in the F1 in Schools National Championship in Austin, Texas, on Feb. 23 with the winning F1 car.

“He brought a Formula 1 poster home and said he wanted to be a part of it,” she said. “I began to coach (the F1 in Schools team) at Southeast High School in 2006-07 in the after-school TSA program.
“Three years later, Mark, now 26, was on the poster,” Nanney said.
F1 in Schools was part of the Technology Student Association (TSA) at the time until it formed its own organization.
The TSA is a national organization of students engaged in science, technology, engineering and mathematics, also known as STEM.
Nanney said the school district’s extra-curricular STEM programs such as TSA and F1 in Schools help the students become successful.
“The kids gain exponentially,” she said.
Team members from the first years are all working for major companies, Nanney said.
Now that the Pinnacle Racing team qualifies to attend the World Championship in Singapore, they have to begin to not only improve their model car, but they also have to raise funds for research, travel and accommodations.
“To do Singapore costs more than $50,000,” Brian said.
To get to Austin, AT&T, Manatee Memorial Foundation, Manatee Education Foundation, PCI Communications, ABEC 357, Dillon Machining, R3 Engineering, On Trac Publishing and Allison Engineering helped by becoming sponsors.
“The challenge is to design and build a Formula 1 race team,” he said. “All the things in a real business — budget, planning, etc. — are needed.
“We’re creating well-rounded kids,” Brian said.
For more information about the Pinnacle Racing team, visit all of their internet and social media sites at www.pinnacleracing.us; Facebook: @Pinnacle; Instagram: @p1nnical_racing; Twitter: P1NNACLE_Racing; and YouTube: PINNACLE RACING.
For information about the F1 in Schools program in the United States, check out the website www.fisamericas.com and the international program at www.f1inschools.com.