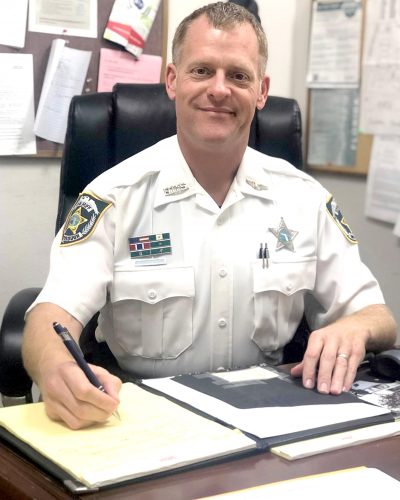 One of the latest scams victimizing seniors in Sun City Center is over for now, thanks primarily to the hard work of Hillsborough County Sheriff’s Office Resource Deputy Jeff Merry, Community Service Aide Michelle Mortimer and HCSO’s Economic Crimes Section.
The two men perpetrating the FedEx scam, one of many known credit card frauds, were arrested in January after duping 25 Sun City Center residents into turning over their credit cards, and then using each card to purchase hundreds of dollars in gift cards. The criminal deception began Dec. 28.
“These guys specifically targeted seniors in Sun City Center, because they knew it was a target-rich environment,” Merry said. “They knew they could call and get their victims to give them whatever they wanted.”
The scam starts over the phone with Crook No. 1 calling to tell his potential victim that his or her credit card may have been compromised. A $6,000 purchase has been made, he said, and if it wasn’t the resident, the bank will need to verify his or her possession of the card to ensure no fraud was committed on their part. An offer is made to send a FedEx courier to the home to pick up the card and take it to the bank, if the resident is unable to do so.
Crook No. 2 then arrives at the home, dressed as a FedEx employee, wearing an official-looking shirt and badge and carrying FedEx envelopes. The victim places the credit card in the envelope and goes through a transaction making the process seem legitimate.
Merry said this courier even convinced a couple of victims to put additional cards in the envelope by telling them “if one card was compromised, others probably were.”
The criminals immediately used the cards they collected to buy gift cards and made hundreds in purchases before the bank had time to call the customer and let them know, Merry said.
Once residents were notified by their banks about the unusual activity, Merry and Mortimer started getting calls and taking reports.
After three or four calls, we realized this was a ring (perpetrating the crimes),” Merry said.
An investigation was launched Jan. 7, and by the end of the day, the courier was identified. But in order to make an arrest stick, Merry needed video, transaction receipts and bank records.
Meanwhile, the fraud continued.
By Jan. 11, the caller was identified, and Merry continued collecting evidence to make the arrests. Six days later, he went to Tampa to talk to a third-party witness who could positively ID the criminal off transaction video recorded at stores where the gift cards were bought.
While driving back to Sun City Center, Merry got a call that someone had spotted the car the crooks were using in the scam, and as he exited I-75, he saw the black Cadillac, made a U-turn and followed it, with backup, to Gibsonton, where an arrest was made.
The driver had every kind of evidence to support the crime in the car, Merry said. He was interviewed and confessed.
His accomplice was arrested a week later.
The men will be charged with organized fraud, aggravated identity theft, criminal use of the personal information of a specified individual, fraudulent use of a credit card and obtaining property by false impersonation.
“The state attorney wants to ensure they are prosecuted to the fullest extent of the law,” Merry said.
Just hang up
All kinds of fraud like this are committed over the phone, and criminals will continue to try defrauding people, Merry said. His best advice is not to engage, simply hang up. Get off the phone immediately.
If someone suggests your credit card has been compromised, the only safe way to confirm it is to call the number on the back of the card.

Computer help with seniors in mind

Manatee Festival of the Arts March 9-10