OPEN TO THE PUBLIC — Fraud Symposium 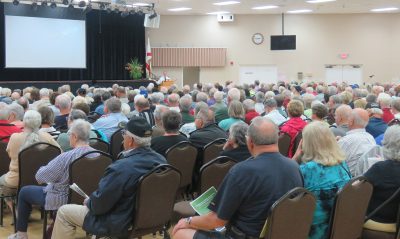 Everyday we read and hear about seniors being taken in by scams and fraud schemes. We are continually warned by our law enforcement agencies to be on the lookout. The Men’s Club of Sun City Center President David Floyd said it has been the club’s long-standing commitment to the safety and well-being of area residents. That includes helping government agencies in warning them about the sophistication of scam artists and urging them to, if victimized, report it to the sheriff’s office.
March 5 from 8 a.m. to 12:30 p.m., is another opportunity to be reminded and garner information about the newest scams. The second annual Consumer Protection and Fraud Symposium at the SCC Community Hall is free and open to the public. It is sponsored by the Men’s Club of Sun City Center, the Community Foundation of Tampa Bay and the Hillsborough County Sheriff’s Office. This is the fifth public safety-themed event sponsored by the Men’s Club in recent years.
“The agencies we work with have been very supportive of our efforts to get the word out,” said Floyd. At 8 a.m. representatives from various civic and government organizations will be at displays to talk about their services. They include Hillsborough County Consumer Protection and Veteran Services, Hillsborough County Sheriff’s Office, Samaritan Services, SCC Security Patrol, Seniors vs. Crime, Sun Towers, FBI, Florida Department of Agriculture, U.S. Attorney – Middle District of Florida and the Campaign Against Human Trafficking.

BILL HODGES PHOTO
FBI Tampa Supervisory Special Agent Andrew Sekela will be one of 11 presenters on a full morning’s agenda that includes displays from a variety of government and civic agencies offering information about their services.

The speaking agenda begins at 9 a.m. with introductory remarks by Floyd, Hillsborough County Commissioner Stacey White and Hillsborough County Sheriff Chad Chronister. Presenters include Hillsborough County Consumer Protection and Veteran Services; Seniors vs. Crime; U.S. Attorney Middle District of Florida Courts; Global Trade Investigations Group – Immigration and Customs Enforcement; and the FBI.
Recognizing that scams and fraud are a continuing threat and frequently target seniors, Jeff Merry, Hillsborough County Sheriff’s Office Resource Deputy for this area, frequently holds public meetings for updates and precautionary measures that can be taken. For information on future gatherings, call 813-247-8200.
Art Smith, in his role with Seniors vs. Crime, also frequently speaks to groups on the subject. “I have spoken to more than 40 audiences around Hillsborough County over the past several years talking about the imposters who seek to separate us from our money,” Smith said. Seniors vs. Crime is a Special Project of the Florida Attorney General’s Office. The office is at 1009 N. Pebble Beach Blvd. on the Central Campus and is not just for SCC residents.
The Men’s Club of SCC is a not-for-profit organization founded in 1962 and is one of the community’s oldest service clubs. For information about the club, call Floyd at 813-634-2970 or V.P. of Communications Art Smith at 813-634-2576.