Haven of Hope says thank you 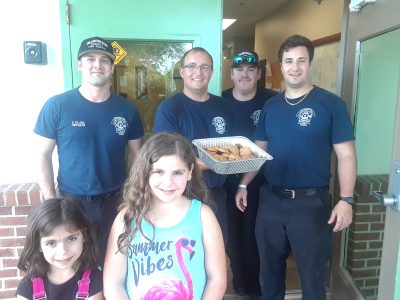 A tradition is born

Dear Editor,
Traditions can have a way of giving birth to themselves. Last year, while caring for our two granddaughters, Jayden 9 and Zoe 6, who live locally, the girls decided they wanted to bake some cookies.
They made a batch of their favorite kind, chocolate and butterscotch chip, and it was fun watching them cooperate and divide the tasks of mixing and measuring. When all was said and done and the cookies had cooled we talked about what to do with the treat they had just made. They decided to donate the cookies to the nearby fire station because they said, “It’s a kind thing to do.”
We took the cookies to Fire Station #28 in Sun City Center, and they carried them into a room full of the firemen’s smiles and thanks and an invitation to see a fire truck up close.
Now, a year later, when I asked if they would like to bake something, they jumped up and down with enthusiasm, saying they wanted to bake cookies for the firemen again “because they save lives.”
Their appreciation warmed my heart and when we delivered their second batch, the smiling firemen came out to thank them and we captured the moment with a photo. The cookies were the girls’ gift and their way of saying thank you to those whose gift to all of us is to keep us safe from fire and injury. As I watched Jayden and Zoe, I realized a tradition had been born.

A slice of history

We have a garbage problem