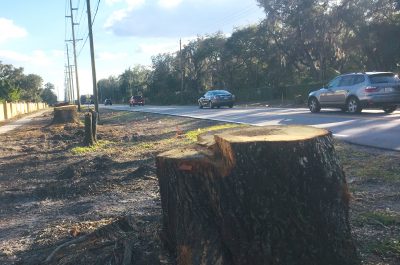 YVETTE C. HAMMETT PHOTO
Hillsborough County has already begun clearing of right of way on Bell Shoals Road in preparation for a three-year widening project expected to start this summer.

A road-widening project designed to alleviate major daily congestion in one segment of southern Hillsborough County, is about to get under way.
Already, Hillsborough County has begun cutting down trees in the right of way along Bell Shoals Road between Bloomingdale Avenue and Boyette Road.
A contract is in the marketplace and should be awarded before summer, when work will begin in earnest to four-lane Bell Shoals, add a bike lane and construct sidewalks the entire way.
A road project is always a pain, but Hillsborough County Public Works Director Jim Hudock said the county has made it clear in the contract that road work is to take place with as little traffic disruption as possible. It calls for two lanes — one in each direction — to be open at all times while the work continues.
The project is broken into two parts with the southern half up first, Hudock said.
“What we are doing now is what we call ‘the advanced utility relocation phase.’ We are doing some initial clearing so that the utility companies like Tampa Electric Company (TECO), Frontier and People’s Gas can get out there and do some work,” Hudock said.
He said the contract is “on the street for bid right now, and we have to receive bids over the next 30 days, then go to our board and get the project awarded and get a notice to proceed.”
There is (sic) maybe 30 days of initial ramp up, but typically within 30 days a contractor will mobilize,” Hudock said.
Once work starts, traffic will continue to move through. “It is a vital artery in that area,” Hudock said. “They will move and shift traffic, but there will always be one lane open in each direction.”
The goal of the project, Hudock said, is to provide increased mobility for traffic by adding capacity for vehicles, pedestrians and bicyclists.
There will be landscaped medians the length of the project, with the northern half irrigated and maintained by the Bloomingdale Taxing District. The southern portion will not be irrigated and will be maintained by the county.
Also, the bridge over Bell Creek will be widened, just north of Boyette Road.
The project also includes improved stormwater drainage.
Of the $65 million the project will cost, Newland Communities, the developers of FishHawk Ranch and its ancillary communities, will pay $22 million, as part of a modified development agreement.
Much of the congestion on Bell Shoals is the result of traffic coming from FishHawk Ranch, a massive residential community built in what was previously a rural area of the county with little more than cattle pastures and a handful of homes.
“Bell shoals is one of the highest volume roadways in our area,” Hudock said. “I’m not sure how it compares to Bloomingdale, but it is over capacity. It can’t handle the needs of the community.”
It’s not going to be perfect,” he said, “but we have placed an emphasis on the fact that this is a two-and-a-half or three-year-long project. The emphasis with the contractor and inspections teams is that we need to do everything we can to limit the impact to motorists. We are extremely focused on making sure this goes as smooth as possible.”