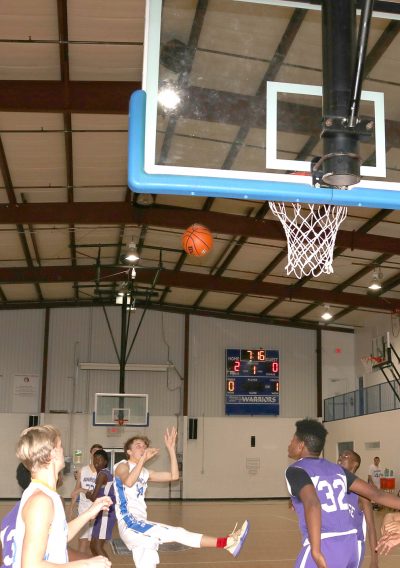 The Ruskin Christian School varsity basketball team won its first round playoff game last week and had a second round match Feb. 12 after press time to determine their next foe. Ruskin coasted to a 53-23 victory over an outmanned Heritage Prep team Feb. 8. The Warriors went up against Heritage Christian School at mid-week in Kissimmee in the Florida Christian Conference playoffs.

Ruskin Christian School jumped out to an early and insurmountable 26-3 lead over Heritage Prep, which had only five players on its squad, all but one were young, inexperienced underclassmen. Paced by the Statham brothers, the Warriors burned the net for 26 points in the first quarter, matching their highest output of the season for any quarter. For the game, sophomore Caleb Statham hit five baskets for 10 points and Noah Statham contributed nine buckets and three free throws for 21 total points to garner team scoring honors. It was the most points Noah has scored in his Warrior career. They had plenty of help from Sam Tuch with 8 points; Jesse Mobley 5; Anthony Jacobs 4; Raymond Mobley 3; and Gino Titus 2. Seeing action but not scoring were Dylan Northrop, Conner Kick, Gabe Hansen and Bryan Parenteun.

Coach Micah Bonner and assistant coach Paul Northrop called off the first string early, giving plenty of playing time to the second string and to the seniors, Dylan Northrop and Noah Statham, playing their final game in the RCS gym.