Whodunit? A murder mystery hosted by the Florida Railroad Museum 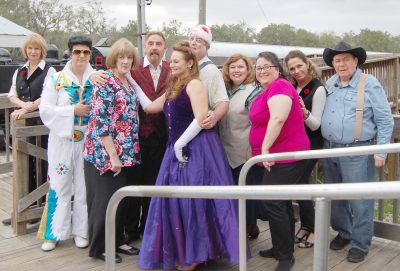 If you like train rides, mysteries and live theater, you will enjoy the current Parrish Playworks production of The Auctioneer’s Last Call, being performed in a rail passenger car during a train ride at the Florida Railroad Museum.

Curtain times are 6 p.m. Friday and Saturday; and 2 p.m. Saturday and Sunday.

The murder mystery play, a writing collaboration between Parrish residents Karen Romant and Christa Hardin, is a tale of stolen gold treasures, conspiracy, intrigue, and of course — murder, told with comedic relief.

It is a classic “Whodunit?” mystery and in the end the audience is challenged to name the murderer.

“What I like is that it mixes up real history and legend,” said Playwright and Director Romant.

For example, in the The Auctioneer’s Last Call, there are historical facts about Benjamin Judah, the secretary of state of the Confederate States of America who sought refuge at the Gamble Plantation in Ellenton, along with the legend of the lost confederate treasure train loaded with the gold reserves of the defeated Confederate States of America, which is said to have headed south to Key West after Richmond fell.

All of the mixing of history and legend are tied together with the plot of train passengers traveling from Parrish to the ghost town of Willow for an auction to raise money to pay off a debt — or is it?

This was one of the questions a group of friends were asking as they took the murder mystery train ride.

“This is my first time on a mystery train,” said Amy Farnsworth of Lithia, who was enjoying the play and was the one who suggested the outing to her friends, Laura Clouston of Lithia; Darlene Gordon of Plant City; Pam Clouston of Lithia; and Diane Bowers of St. Petersburg.

“I like it so far,” said Farnsworth as the first scene ended. “I would recommend it.”

As the passengers (audience) leave the Parrish depot at the Florida Railroad Museum, 12210 83rd St. E., Romant sets the scene, letting the passengers know they are participants in the action. 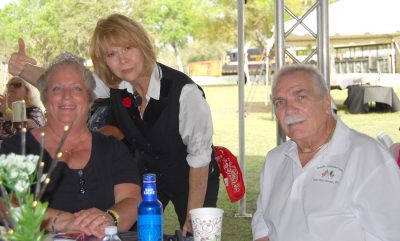 Playwright and Director of the murder mystery train play The Auctioneer’s Last Call, Karen Romant, center, points to the tiara she bought at the “auction” but somehow ended up on the head of passenger Sandy Howey of Sun City Center. Sandy and her husband, Wayne celebrated their 40th wedding anniversary Feb. 9 during the mystery train ride. “I thought it would be a good way to celebrate our anniversary,” said Wayne, who heard about the event at the Sun City Center Irish Connection Club.

The auctioneer Roy Ichabod Parsley, played by local actor Dann (sic) Baugher, began the play as the other actors come into the train car giving the audience clues through their dialogue as to their possible participation in a scam.

The production was presented in two separate train cars, so Romant scripted the play with the characters split into two groups of actors, each performing their scene in one car and switching cars and repeating their parts again.

“The play is more expository than chronological,” said Romant, who has a master’s degree in theater from Florida State University and is the founder of the local theater group, Parrish Playworks.

Along with the auctioneer, there was a cast of dubious characters, including Ida Witherspoon (Catherine Carter), a local matriarch and the blue-ribbon pie-baking winner whose husband, the county sheriff, happens to be the pie-baking contest judge.

Other characters are, Cindy Sue Sweetley (Rachel Schuette), last year’s Manatee Queen Bee, who is somewhat bitter she lost her crown to the auctioneer’s daughter; Travis Buckland (Phil Montgomery), a Cracker cowhand down on his luck; Mayor Wilma B. Lackhart (Barbara Anne Smilko), a politician with get-rich plans for Parrish and Willow; Tiffany Ann Canterway (Debbie Davidson), a southern belle with Yankee roots whose family owns the town of Willow; Chester Bonfals (Keith Kessler), an Elvis tribute artist hired to entertain during the auction his uncle the auctioneer was holding; and Gus Rottermeier (Ralph Ward), the groundskeeper of the property at Willow.

The mystery train hosts are Romant and Dawn Reif.

The rapid changing of scenes led to some madcap antics during the 40-minute trip as the train “sped down the track at about 5 miles per hour,” as Romant amusingly described it, to Willow.

Once at Willow, a former logging, sawmill and turpentine town in northern Manatee County, the passengers disembarked from the train to be greeted with a hot dinner of chicken, pork or vegetable entrée with salad and sides served under a large tent.

Sugar Shakers food service in Sarasota, which did the catering for the event, has been the caterer for several other events at the museum.

“This is one of my favorite places to cater,” said Sugar Shakers owner Richard Wright, who has been in the food service business for 40 years. “They’re great people to work with.”

During the dessert course, the actors took to the stage and the auction scene began, providing the audience with more mystery, intrigue and clues. 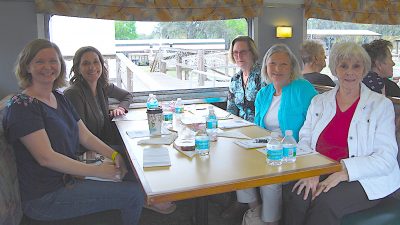 After the dinner when the passengers were all aboard the train again, the action in the play picked up with the characters giving their alibis and excuses why they could not be the murderer.

Before the final act, the audience was asked to fill out a form with their guesses as to who was guilty of the murder and the reason why.

Each of the five women who came to the play together picked different suspects as the murderer.

In the last act, the murderer confesses, and those in the audience who picked the correct character were given a prize.

A “prize” also was given to a passenger who guessed wrong, but had a great reason.

Laura Clouston was the only one in the train car she thus was riding in to pick the murderer, winning a prize.

When the train arrived back at the Parrish depot, the play cast greeted the audience on the platform as they got off the train. 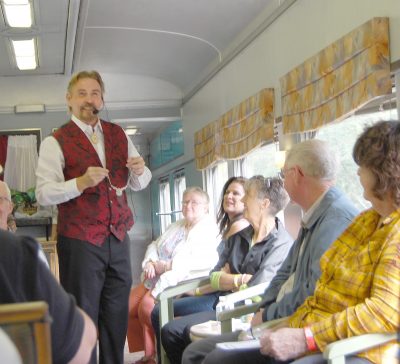 Dann Baugher as auctioneer Roy Ichabod Parsley displays a “genuine” necklace to the passengers as a preview of the auction in the murder mystery train play, The Auctioneer’s Last Call.

Besides the mystery train production, the museum raises funds with several other train-ride events throughout the year, such as The Hole in the Head Gang train robbery; the Von Kessinger’s Express, a World War II reenactment; and the very popular North Pole Express during the Christmas holiday season.

The Florida Railroad Museum has been a part of the Parrish community since 1982.

“We’re always trying to improve all our train ride experiences,” Miley said. “And we’re also adding more structures and facilities, such as the new restrooms at Willow.”

Miley said the mystery train event would probably be close to a sell-out.

Romant said the production this year was bigger and better.

“The cast is bigger,” she said, “and there’s more production value.”

This is the second year Parrish Playworks produced the mystery train event for the museum.

Museum volunteer Peter Mason started the mystery train program at the museum in 2009 and ran it until 2017.

“I was on another mystery train, and thought it would be good for the Florida Railroad Museum,” Mason said.

Romant’s experience in theater and production helped with the logistics and blocking needed to perform in the tight space of the two train passenger cars. 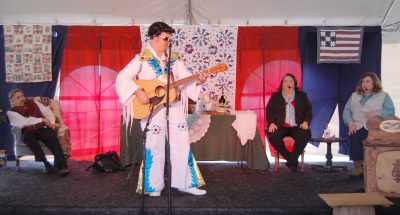 Keith Kessler as Chester Bonfals, an Elvis tribute artist, entertains the passengers before Dann Baugher, left, as Roy Ichabod Parsley, begins the auction during their stopover at Willow in the murder mystery train play The Auctioneer’s Last Call. Barbara Anne Smilko as Mayor Wilma B. Lackhart and Debbie Davidson as Tiffany Ann Canterway wait for the auction to begin.

“I always had writing a sitcom on my bucket list and this (play) was like that,” Hardin said. “I wanted to make it work on a train, and Karen gave me the opportunity.”

Hardin started her company, Supper Sleuth, after attending a mystery dinner party and finding it “unnecessarily vulgar and cheesy.”

She thought she could write a mystery dinner party script without the vulgarity, and make it better.

“We followed the formula but made it more fun and crafty,” Hardin said. “We now have six games, five for adults and one for children.”

Romant gave the actors and crew credit for the success of The Auctioneer’s Last Call.

“We have a lot of good people in this production,” she said.

In the end, the playgoers were surprised to learn that the murderer was…

For information and tickets for The Auctioneer’s Last Call, visit the Florida Railroad Museum website at www.frrm.org.

More information about Hardin and her Supper Sleuths parties can be found at www.suppersleuths.com.