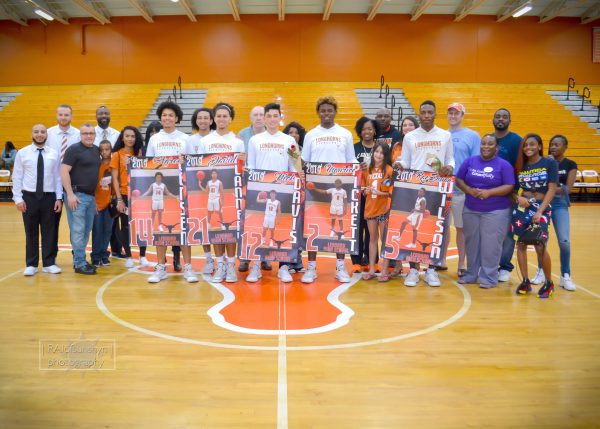 Trying to shake off a disappointing regular season 61-60 loss at home on Senior Night, the Lennard Longhorns headed up to Plant City Feb. 12 to play Durant in the opening round of the District 9 playoffs. The dubious honor of playing powerhouse Tampa Bay Tech the next day, Feb. 13, goes to the winner. The loser goes home. Finals for the District 9 playoffs are Feb. 15, with both the winner and loser qualifying for regionals the next week. 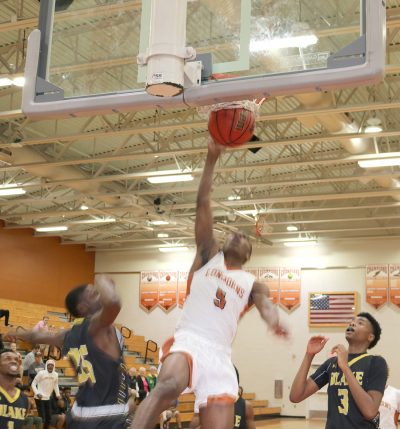 Coach Zerko Stojakovic’s Longhorns came out last Friday playing intense defense and hitting their shots to take an early lead over the Blake Yellowjackets from Tampa. Lennard maintained its lead until they started missing shots in the second half, and Blake crawled back into the game. The stage was set for a wild finish and that is what the large crowd got.

Lennard had a three-point lead with only 30 seconds left to play. Blake moved quickly to its offensive goal but averted a traveling turnover on a no-call from the referee. Instead, Blake’s superstar freshman Emanuel Sharp was fouled by Lennard. Emanuel went to the charity stripe and hit his sixth and seventh free throws of the night without a miss. Lennard, still led by one, turned it over on the very next possession. Blake found pay dirt with its 61st point as the clock was ticking. Trailing 61-60, Lennard was fouled in a wild scramble for the ball with one tick left on the clock. One Longhorn free throw would tie it, two would win it. Lennard got neither. Game over as the Longhorns fell to 15-10 on the season.

Coach Derrick Sharp’s Blake team was led in scoring, as usual, by his son, the freshman phenom Emanuel with 27 points and Joseph Dean with 18 points. Emanuel, who has never met a shot he did not like, had to take 29 shots from the field, hitting only 8 for a paltry 28 percent shooting with 4 of 11 from two-point range and 4 of 15 from the 3-point arc. Along with his perfect foul shooting, Emanuel finished the game right at his season average.