Wintertime is actually Dec. 21 through March 20, but with all the cold fronts that have arrived, it’s definitely feeling like winter. The water temperatures have fallen into the 60s and it looks like the 70s are done until spring.

The wind has been a major factor in getting out on the water. Every day starts off dressing in layers with Gore-Tex (to keep us dry) and Thinsulate (to keep us warm), then perhaps shedding layers during the day and then readjusting again in the late afternoon.

The whitebait have pretty much moved off the flats and into deeper water. Numerous towers along the channel are holding bait. The key to netting this bait is to ensure there is some water (tide) movement, so the bait is up in the water column.

This past week’s charters have resulted in trips to the TECO power plant off Big Bend Road. The warm water discharge is a magnet for numerous species of targeted fish. It’s also been loaded with manatees, dolphin and stingrays. It’s really quite the show.

The bite at the power plant has been excellent. We caught cobia, jack crevalle, bonnethead and bull shark. Blacktip shark should also be moving in soon. 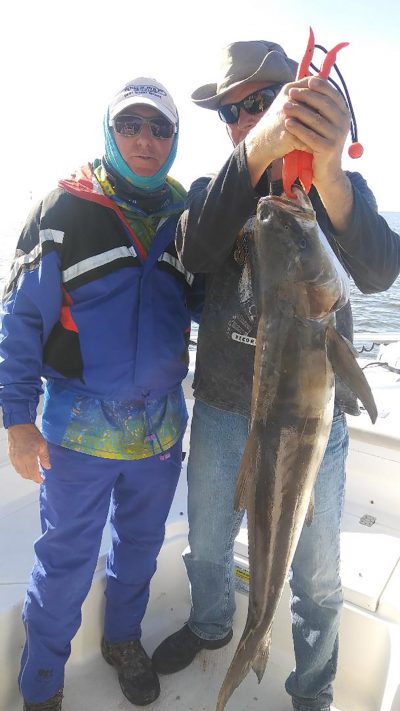 Captain Brian Lemelin, left, with Brian Ritchie and the 40 pound cobia he caught.

Fishing the power plant is a lot of fun, if it’s not crowded with other boats. For cobia, we are mostly sight fishing. Trolling the flats and looking for the silhouette of the brown bomber. We’ll be set up with several casting options in hopes of enticing the cobia to bite. One rod will be setup with live bait (shrimp or whitebait), one with a plastic eel, and one with a top-water plug. Accurate casting is critical. Landing the bait 6- to 12-inches in front of the cobia, usually entices the bite. Sometimes the cobia are on their own or traveling in pairs. Double hookups are not unusual. Keep the hooked cobia in the water and allow the second cobia to catch up and join in the action. Remember, cobia have to be 33 inches at the fork of the tail to keep, so handle with care if you’re releasing. Cobia will also tag along with the stingrays and the manatees, so keep an eye out for that.

The cobia in the accompanying photo was caught by Brian Ritchie, Qualia Reels. This was the first cobia he ever caught — a great fight on light tackle that lasted over 30 minutes. It weighed around 40 pounds. Brian said he has fished around the world and never felt a fish shake its head so violently as this cobia. At the same time we were hooked up, Captain Gary Allen was also hooked up and fighting a similar-size cobia.

Pound for pound and inch for inch, the jack crevalle may be the hardest fighting fish in the bay. We caught this 32-inch jack on a jig head with a large shrimp hooked through its horn. On a 4000 size reel, we chased this jack for 45 minutes before landing and releasing it. This is the biggest jack I’ve seen caught in the bay.

Bonnethead sharks have arrived and are located in the flats area and out to 6 feet of water. We like to use a shrimp, hooked through the horn, attached to a jig head with a float about 3 feet, 4 inches above the jig. The bull sharks have been located in the deeper water. Any cut bait should produce hookups. The juvenile blacktips will be in 5 feet of water. We use the same setup as with the bonnethead sharks; however, light steel leader is a good idea on the blacktips and bull sharks. Pieces of squid will work as well.

Away from the power plant, trout have started to show up in really good numbers. They are great table fare. Large numbers ensure a steady bite. There are generous keeper regulations on this fish (four per person, one can be over 20 inches). That makes this a go-to fish this time of year. Greenbacks are working really well, but they are hitting shrimp too. The trout don’t freeze well, so eat them up fairly quickly. We cooked some up in a beer batter, a little olive oil and served with collard greens and jacket potatoes. Not only was it great tasting, it’s also healthy.

Snook and reds have moved into their winter homes. Most of the redfish we are catching are the smaller size. The snook vary in size, but the bite has been solid up against the mangroves in moving water.

If you’re looking for a great day on the water, give me a call and I’d be happy to show you how much fun our fishery can be. Hope to see you on the water. Tight lines.

Captain Brian Lemelin owns Optimus Fishing Charters. You can reach him by calling 813-365-0230, or visit www.optimusfishingcharters.com.