A long history in citrus

has a long history in Manatee County 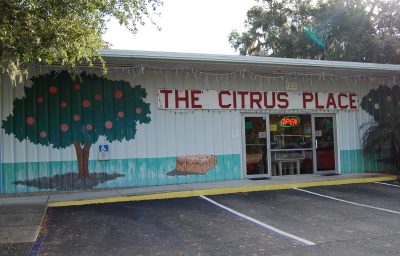 Ben and Vera Tillett started The Citrus Place, 7200 U.S. 19 in Terra Ceia, in 1972 as a U-Pick grapefruit grove, and the business grew into shipping and retail sales over the years.

Sid Tillett has been working at his father and mother’s business, The Citrus Place on Terra Ceia Island, picking fruit after school since he was 14.

“My father started around 1972 as a U-Pick grove of Ruby Red grapefruit,” said the 60-year-old Tillett. “Back when we started it was only grapefruit out of a tractor shed.”

Now customers can stop by the store at 7200 U.S. 19, right before the entrance ramp to the Sunshine Skyway Bridge, and purchase a variety of oranges, tangerines, grapefruit and other citrus.

And for the vacationer driving home who forgot that souvenir for grandma, there is a wide selection of gifts at The Citrus Place.

Another added item to the long list of goods sold at the store is locally harvested seafood, such as clams and stone crab claws.

But many local Manatee County residents know The Citrus Place for the fresh squeezed citrus juice at the 47-year-old business.

“At one time there were five or six growers in Manatee County that did pasteurized orange juice,” Tillett said. “Now there’s only one other beside us.

“Ours is not pasteurized,” he said. “It’s pure orange juice.”

To ensure the juice is free of bacteria, samples have to be tested in a lab every week, Tillett said.

The Citrus Place also still ships citrus to customers around the country.

They do not ship as many packages as they have in the past, though, Tillett said.

“At Christmas in times past we would do 200 packages a day for 20 days straight including Sundays,” he said. “Shipping is now a smaller part of the business.” 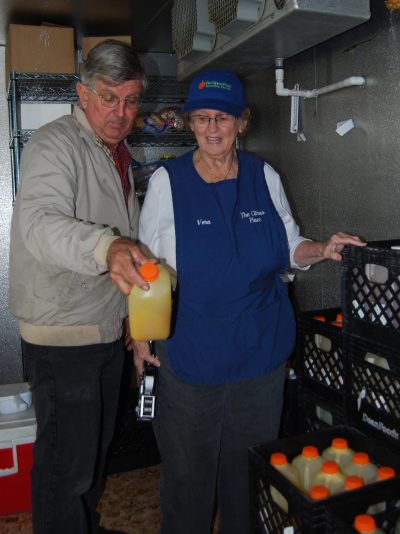 Sid Tillett and his mother, Vera Tillett, check a bottle of fresh-squeezed juice in the cooler at The Citrus Place on Terra Ceia Island.

“We used to ship bushels and baskets,” he said. “But we have had some of the same customers for 20-25 years.

“One was in the other day who remembered when we were still operating out of the tractor shed,” Tillett said.

He said his father, Ben Tillett, and mother, Vera Tillett, opened The Citrus Place while they were both schoolteachers.

Ben Tillett, 87, whose Manatee County roots go back to his grandfather, was born in the big house behind where the business is now located.

The family planted citrus trees on the eight acres surrounding the house.

“He started the U-Pick business in 1972 because wholesale prices were so far down,” Tillett said. “He had eight acres of grapefruit to get picked.”

Ben Tillett was an advanced English teacher at Manatee High School and faculty advisor for the yearbook while he ran the U-pick business.

The Citrus Place started with only the U-Pick business, then got into shipping, and then juicing and retail sales.

“It’s a very interesting business,” said Vera, who with her husband, Ben, can be found most days working at the store. “I’m happy when I’m here.

The Tilletts have two sons, Sid and Mike, who helped out at The Citrus Place from when they were young.

Sid graduated from Florida State University in Tallahassee with a degree in business administration with an accounting emphasis.

He worked for five years in the business office for Misener Marine Construction on the Seven-Mile Bridge in the Florida Keys and the Sunshine Skyway Bridge projects.

“I started at the bottom and in the end I was doing annual financial statements,” Sid said.

He also worked for the family-run Kearney Development Company in Brandon, and now helps run The Citrus Place. 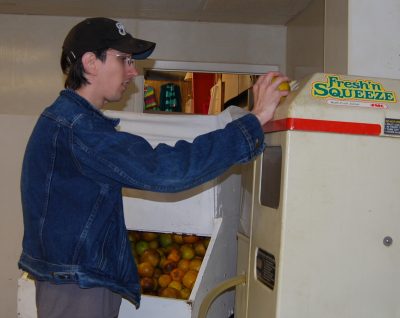 Carlton Tillett, 25, runs the juice squeezer at The Citrus Place, a business his grandparents, Ben and Vera Tillett, started in 1972. Carlton is a fifth-generation Manatee Countian.

“It’s tough being a seasonal business because you have four months where you’re not making anything,” Sid said.

The citrus growing season starts in October, and depending on the variety, only lasts to June or July.

Being a small business these days is not easy, he said.

“We’re having problems getting workmen’s (sic) comp insurance and spraying insurance,” Sid said. “And diseases such as citrus greening are taking its toll.

“The small farmer is not able to take care of the trees because there’s not enough science,” he said. “I hope there’s a solution soon.”

Citrus greening, or huanglongbing, was found for the first time in the United States in 2004.

According to the Florida Department of Agriculture website, “Huanglongbing is a bacterial disease that attacks the vascular system of plants. Once infected, there is no cure for the disease, and in areas where the disease is endemic, citrus trees decline and die within a few years.”

Several local small groves supply much of the citrus shipped and sold at The Citrus Place.

“But so many are so small they can’t grow the variety needed,” Tillett said. “The honey murcott may be history because of greening.

“The grower has to think ahead five years,” he said. “A tree isn’t in full production until 10 years (after planting).” 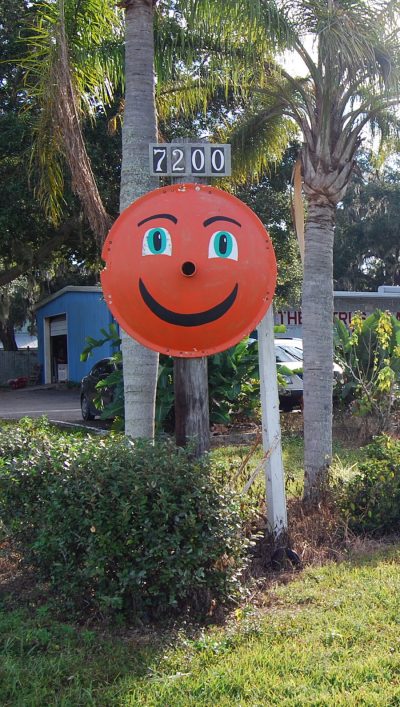 Another generation of Tilletts is continuing to keep citrus growing in the family.

Sid Tillett has three sons, Christopher, Carlton and Cameron, who have worked at The Citrus Place.

The citrus industry has a long history in Manatee County.

One of the earliest successful growers was Kimball Atwood, a New York businessman, who planted 16,000 grapefruit trees in 1897 on land he ownded in Palmetto along the Manatee River where the Feld Entertainment complex is now located, according to an article by Diane Ingram, supervisor of the Manatee County Agricultural Museum.

“Atwood Grapefruit Company became the largest grove in the world. It is said that England’s King George V was an annual customer. At the peak of production in 1927, the grove produced 160,000 boxes, valued at more than a half-million dollars. Atwood passed away in 1934, and the grove remained in the family until the late 1960s/early 1970s when the property was sold to industrial development,” Ingram wrote.

The county also is the home of Tropicana, an orange juice processing plant in Bradenton that Anthony T. Rossi founded in 1947.

Tropicana, now a subsidiary of PepsiCo, has a wide variety of juice products and is a major area employer.

For more information about The Citrus Place, visit their Facebook page at www.facebook.com/TheCitrusPlace, or call 941-722-6745.