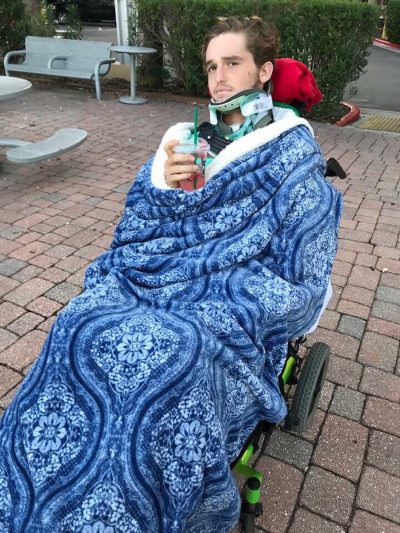 Blaize Cortes was struck by a vehicle while walking to his bus stop on Oct. 17 in Ruskin.

Blaize Cortes is a 17 year old, up-to-now very active boy who was adopted by the Cortes-Laboy family in the Ruskin area 10 years ago.

Until Oct. 17, Blaize was a typical teenager, more or less. Now, after barely surviving a life-threatening traffic accident, Blaize is going through a very difficult and very expensive rehab process. His life will never be the same, but at least he has a struggling chance.

Nilda Cortes tells the heartbreaking, and heartwarming, story of Blaize since a few weeks ago.

She says that on Oct. 17, 2018, while going to meet a friend at the bus stop so they could go to school together, Blaize was hit by a SUV and was critically injured.

Nilda recalls that fateful moment. “I got the call that my son was hit by a vehicle and that he was being airlifted to Tampa General Hospital. I rushed to the scene of the accident and, upon asking, one of the policemen told me Blaize had been taken to TGH, but he was fine. The policeman said he suffered two fractures, one in each leg with an open wound on the right leg.”

Nilda and her husband rushed to the hospital and were immediately greeted with, “Oh, you are the parents. Please go to the waiting room for additional information.”

“Next a physician comes in the room and tells us the devastating news. ‘Your son was critically injured. He has suffered the following injuries: His spine was broken in two, so he will no longer be able to walk; his kidneys have also been injured so he will need to be dialyzed, his right lung has collapsed and we had to place a tube to drain the blood and help him breathe better, his spleen was also hurt in the accident. He has a lot of inside trauma. He suffered fractures to both legs; one with an open fracture. A bone on his neck has also suffered a fracture. You can see him as soon as they are finished stabilizing him.’

“When I went in to see him, I was overwhelmed,” says Nilda. “My son was covered in blood and he had scrapes all over his arms, hands, face, back, fractures, tubes coming out of his chest, breathing tube, etc. We really did not think he would make it. But for the Grace of God, he did make it. He underwent surgeries to correct the two fractures on his legs. Then he underwent surgery to his back where both pieces of the spine were attached with a metal rod. That surgery took six hours.

“Blaize had to wear a collar for 12 weeks. Now six weeks left. His rehab had been going great until he had to get surgery to his arm to have a (arteriovenous) fistula inserted that would facilitate his dialysis. He will need a kidney transplant in the future. Hopefully, that process will start around spring of 2019.”

Nilda reports that Blaize is a very cheerful, free spirit, who loves the outdoors and the woods, fishing, hunting, “which he has not been able to do as we don’t encourage it,” and exploring.

“So at first, Blaize was deeply depressed knowing he would not walk again and do the things he loved. He refused to eat and wanted to die; however, with lots of prayers and encouragement from our family and friends, he is now doing much better in accepting what happened to him.”

In a short time, Blaize’s only request to his parents was that he wanted his hospital room to look like a cabin, so Dad José and mom found the wallpaper online and now his room resembles a log cabin. His parents have also ordered camouflage sheets and blankets, etc., per his request.

Nilda is pleased to say that the community came together to help raise some money for his bills and other needs. She says, “They even had a carwash to raise funds. About $5,000 was raised, but the Lord knows his hospital expenses will be much more than that. However, we are very thankful to God that he is alive and is doing quite well considering his injuries.

“We are astounded to see how many people love his gentle and humble heart. Many people have gone to see him at the hospital including the young man who took his time to stay with Blaize at the scene and assist him and give him the comfort that we couldn’t give him as we were unaware of what had happened,” she says thankfully.

Nilda adds, “There’s so much we are thankful for. We thank every prayer and well wisher, and all the meals brought to us while sitting with our son practically 24/7.

“We appreciate your continued prayers as he has a long road ahead of him.”

To help with Blaize’s medical expenses, short term and long-term needs, go online and enter tinyurl.com/blaize-medical-expenses, and/or call his mother Nilda at 813-340-9638.