Family dog’s emergency a lesson for all pet owners

Family dog’s emergency a lesson for all pet owners 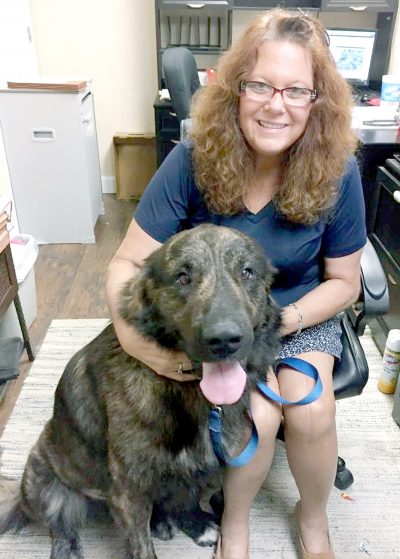 Lisa Hast had the scare of her life recently after her dog, Ruger, decided to “go out for a night on the town” and came back at death’s door.

The 3-year-old, 145-pound Great Pyrenees Anatolian Shepherd mix, who stands 7-feet-tall upright, normally protects the sheep and goats from predators at the Hast family’s Little Foot Farms in Balm. For some unknown reason, the gentle giant recently climbed over his family’s 6-foot-high horse fence and proceeded to gallivant for hours, ending his evening with a late-night snack of a highly toxic cane toad.

“When Ruger came back the next day, he wasn’t himself and by the time I got home, he was completely lethargic, and his breathing was shallow,” Hast said. “He was near death.”

It was the weekend and local veterinary offices were closed, so Hast and her husband Jason took their gravely ill dog to the Animal Emergency Clinic in Brandon. Thus began the nightmare experienced by many pet owners.

Much like a human in the same condition, Ruger had to undergo emergency treatment that included bloodwork, X-rays, antibiotics, medications and IV fluids.

“The prognosis wasn’t good, and every minute the bills were mounting” Hast said. “His liver enzymes were 4,800 rather than the normal 100, and things looked pretty bleak.

“There were lots of prayers and many tears,” Hast continued. “All I knew was that Ruger is a member of my family, and we had to do all we could to save him.”

The following Monday, he was released into the care of his regular vet, Leslie Sierra, who provided almost daily follow ups over the next two weeks. Ruger gradually improved and is now back on the farm tending his herd. He’ll return to his veterinarian later this month to have his liver checked.

For many animal owners, such an expense would be insurmountable. They would have been forced to put down their pet or go heavily into debt.

Fortunately, Hast, of East Bay Insurance, had taken out a pet insurance policy when Ruger was 8-weeks-old. Except for her deductible, the policy reimbursed her for all but about $300 of the expenses, she said.

“I didn’t have to worry about (the bill), like so many other people would have,” Hast said. “It gave me peace of mind to know that no matter what he needed, it would be taken care of.”

For Hast, pet insurance is a must these days.

“I recommend everyone look into it as early as possible in their pets’ lives,” she said. “They’re part of the family, and you never know when something (like Ruger’s experience) is going to happen.”