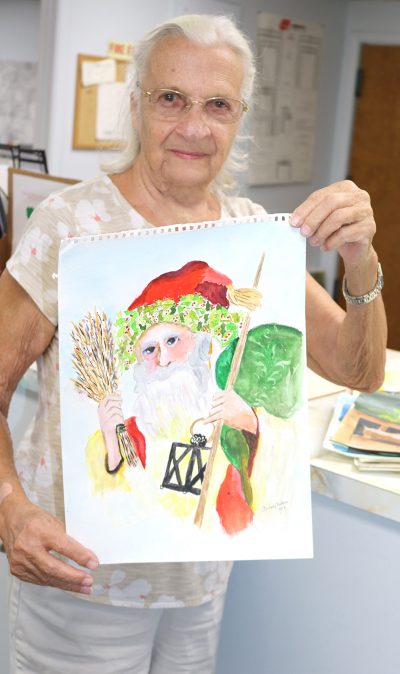 STEPHEN FLANAGAN JACKSON PHOTO
Audrey Wallace displays her watercolor rendition of St. Nick for the December page of her calendar gifts that she has printed at M&M Printing Co. in Ruskin.

SUN CITY CENTER — Audrey Wallace has had a long, fruitful and prosperous life in a variety of commercial- and corporate-type experiences — from Connecticut to Latin America to Florida. Now, the octogenarian has recently embarked on a new career, which is an avocation rather than a vocation. Although no Edward Hopper or Georgia O’Keefe or Grandma Moses, at least not yet, Wallace’s introduction to the brush, easel and watercolors about three years ago has brought her a great deal of satisfaction, pride and compliments for the calendars sent to friends and family featuring her artwork.

“I’ve been taking art lessons from Diane Simon at Kings Point going on three years,” said Wallace, preparing her 2019 calendar for printing at M&M Printing in Ruskin, adding, “Diane is a great teacher with a lot of patience.”

Wallace and her significant other actually have had a home in Sun City Center for 10 years but immediately upon purchasing the home in Kings Point, they headed to Ecuador for vacation and ended up seeing some property they liked there. They bought six acres, had a house built, and began developing a gated community on the Pacific Ocean. Flipping the snowbird scenario geographically, Wallace would return to SCC twice a year for six weeks each time, until the destructive, deadly earthquake in Ecuador in April 2016. “We returned here and have not been back (to Ecuador) since, although our house and community in Ecuador are still standing and occupied. So we have actually lived full time in SCC for the past two-and-a-half years,” she said.

Wallace grew up in Norwalk, Conn., with four sisters and two brothers. “We learned at an early age from my father that ‘nobody promised you a rose garden’ and ‘life is not a bowl of cherries’ and that ‘life is what you make it,’” Wallace recalled. “I went to the only public high school at that time, Norwalk High, and graduated in 1956.”

Wallace remembers that she had many jobs after high school, part time and full time. “I worked in a bank, a candy store, for an accountant,” she said, “and then when my children were a bit older I saw in the local newspaper that a new Swedish manufacturing company was moving to town. I applied and received a position as secretary to the president.”

She moved up the corporate ladder quickly. “Once the firm got started and was up and going, I transferred to the manufacturing side of the business and became Director of Manufacturing.”

The company made filters for use in the cooling towers at nuclear power plants and scrubbers for the electric power plants. The company grew and opened five additional plants in the U.S. and one in Mexico. Wallace oversaw all of them.

“They sent me to school, to their own college where I learned engineering. I was responsible for seeing that each step of the process was done exactly to specifications,” said Wallace. “So my life became traveling between the plants.

“Here in Florida my husband and I had a catfish farm in North Fort Myers, and we also owned a bail-bond business,” said Wallace. “Yep, I actually bonded people out of jail and tracked them down when needed. I was involved and licensed in all of that.

“Then my husband died rather young and suddenly so I sold the fish farm and bail-bond business and became immersed in the manufacturing groups, as president of several and speaker at others,” explained Wallace. “After 20 years I left my job and became the manufacturing specialist and consultant for the southeast area of Florida. My life was never boring.”

When Wallace retired from corporate life, she moved to Kings Point. “I was looking for something different to get involved in, totally different as my life had always been more black and white, so I picked art.

“I had never drawn anything non-work related, so I thought I’d give art and drawing a try,” she said and joined the KP Art League about two years ago.

“I only paint with watercolors. Of course, we have our assignments in class, which usually take two weeks to complete, and the paintings are in all sorts of subjects,” said Wallace. “I like New England scenes with houses and the woods. I am enjoying it all.

“The first year I decided to make a calendar from my paintings to send to my siblings and a few friends,” she said. “I thought they would enjoy seeing a different side of me. I could do something besides tennis, golf and bike riding. I can tell you my siblings were impressed,” she added.

“I get a lot of contentment. Drawing and painting has taught me not only art, but to relax, seeing that I am a type-A person,” she observed. “I like it when my friends come over and compliment me on some of the paintings, and I surprised myself that I can actually put a picture on paper and it doesn’t look bad — in fact some are pretty good. Also it’s a great feeling when my siblings and friends call and compliment me on the calendar they received, and I’m pretty sure it is genuine.

“I never had the gift of painting, nor had I ever tried painting or drawing. Right now it is mostly artwork with Diane (Simon), but I have done a couple of pictures of my own choosing, and I am beginning to branch out,” Wallace remarked.

“I have two children and three grandchildren, all in this area, which is great, and a significant other of 10 years,” said Wallace, already working on 12 ideas for her 2020 calendar.