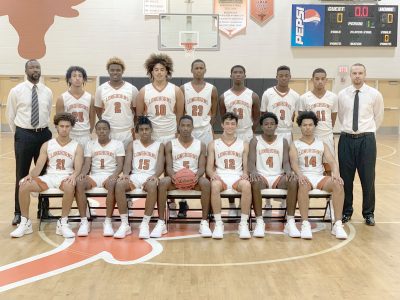 RUSKIN— Revenge and improvement are on the minds of the Lennard Longhorns boys’ basketball team and head coach as they open regular season play this week after splitting two pre-season games.

The Longhorns started play for real at Durant on Nov. 27 after losing to Lakewood Ranch and beating Bradenton Christian in exhibition games over the Thanksgiving break. Later this week, coach Zarko Stojakovic opens at home against Spoto at 6:30 p.m. Friday night, Nov. 30. Last season the Longhorns topped Spoto in overtime 62-59. In 2017-18 Lennard fell twice to Durant by a grand total of 3 points. The Cougars finished 8-13 under coach Nate Francis who has been replaced by new coach Sean Hayes.

Stojakovic, commencing his second year at Lennard as varsity head coach, is in his sixth year coaching high school basketball. Stojakovich posted a 7-15 record at Lennard last season. He played at Armwood High and attended University of South Florida prior to starting his coaching career as a varsity assistant coach at Armwood for three seasons. Stojakovic also teaches Health & Physical Education at Lennard.

“I predict we will be well over .500 and we will contend for a district championship,” added Stojakovich in an upbeat mood. “I expect our kids to buy into the team mentality of ‘we’ over ‘me.’ I want this team to continue changing the culture of Lennard and have a memorable experience playing with their ‘brothers.’”

Although not blessed with an abundance of height, Stojakovic looks to overcome that deficit in other ways.

“We will be an up-tempo team,” he said. “We will try to score a lot of points and be physically demanding against our opponents. In the off-season, we have spent a lot of time in the weight room and on the court working on strength, size and skills,” pointed out Stojakovic, adding, “We bring all our confidence into the season.”

Among the 15 Longhorns on the varsity roster, Stojakovic is looking for stability and experience from Rae’Shaun Wilson and Aaron Jensen, both seniors, and Jayden Lacey and C.J. Peterson, a pair of juniors. Among his best new prospects are senior Calen Daymond and juniors Trey’von Whitehead and Jalen King.