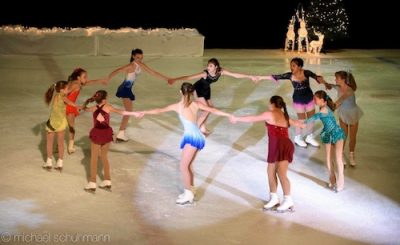 It is the annual traditions that make the holiday season so special.

And the staff and skaters at Ellenton Ice and Sports Complex have their special tradition to make every holiday season spectacular.

“We have been doing a holiday show since 2000, since we opened,” said Shannon Raley, figure skating director for the ice complex at 5309 29th St. E., in Ellenton, next to the Ellenton Premium Outlet shopping center. “It’s a tradition at our rink.”

“A Skating Spectacular” is a one-hour, 10-minute skating production with routines performed at 3 p.m. and 6 p.m., Saturday, Dec. 8.

“It’s a gala-type show where we showcase our skaters from 3-year-olds to adults,” Raley said.

Skaters will glide across the ice doing spins and jumps to holiday music, from traditional to country and pop.

“We pick the date a year in advance to make sure the ice is available,” Raley said. “We started planning the program a few months ago.

“All the coaches get together to come up with ideas and to pick the music, and then over the following months we perfect it,” said Raley, who skated professionally with Disney on Ice.

She said it is a lot of hard work for everyone who is involved. 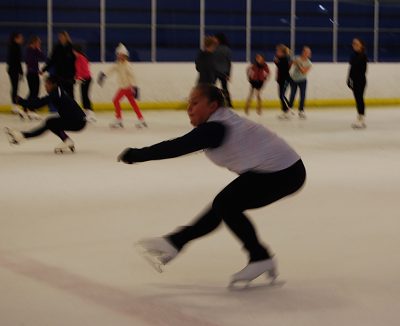 Skater Jaden Muncie practices a maneuver at Ellenton Ice and Sports Complex during rehearsal for the annual holiday show, “A Skating Spectacular.”

“We just started practicing this week (Thanksgiving week) and will practice several times the following week,” Raley said. “And the week of the show we’ll be practicing even harder.”

The show will open with a routine to the traditional Christmas song, “Carol of the Bells.”

“Our highest-level skaters will perform this number,” Raley said. “There’ll be a lot of double jumps and pairs skating.”

Ellenton Ice and Sports Complex is the home rink to several national competiton skaters, and most of them will be performing the opening routine.

The National Team skating pairs performing in the show are Jessica Pfund and Josh Santillan; Grace Knoop and Blake Eisenach; and Taylor Nordquist and Mark Sadusky.

All three pairs will be competing in the United States Nationals on Jan. 18 through 27 in Detroit, as will National Team skating pair Deanna Stellato and Nate Bartholomay, who also practice at the Ellenton facility.

Stellato and Bartholomay will not be able to perform in the holiday show this year because they are traveling to Croatia to compete at the Golden Spin of Zagreb Competition with coach Jim Peterson from Dec. 5 through 8.

The couple is currently ranked third in the United States.

The opening number will be followed with several routines of skaters who take lessons or use the ice at Ellenton Ice and Sports Complex.

“Anyone is invited to skate here, whether you’re young or old,” Raley said. “Our show ties together our community of skaters.

“Some of the adults have only been skating for 6 months, but wanted to be part of the show,” she said. “And the younger children are excited about appearing in the show because they get to wear costumes and perform for their families in the audience.” 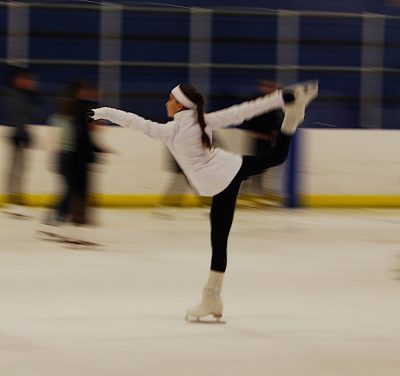 Skater Diana Larion practices a maneuver at Ellenton Ice and Sports Complex during rehearsal for the annual holiday show, “A Skating Spectacular.”

Most of the costumes will be typical skating dress, but for the Country Christmas routine the skaters will wear plaid shirts and blue jeans.

“And for the Polar Express skating routine the beginner skaters will be wearing pajamas,” Raley said.

“The Country Christmas routine will be performed to music by Kenny Chesney,” she said, “and some of our younger skaters will perform to Kelly Clarkson.

To make the ice rink appear more stage-like, a giant black curtain will drape the back wall to create the backdrop and Christmas trees, reindeer, and lights will decorate the ice.

A lighting crew will handle the spotlights and skating coach Emma Chinault will coordinate the music.

All of the rink coaches have multiple roles for this production.

They come up with routines for their group, rehearse with the skaters, and perform in the show.

The coaching staff at Ellenton Ice is made up of former professional and competitive skaters.

Jade Fulton, of Apollo Beach, was with Disney On Ice.

Emma Chinault, of Bradenton, was a former skater at Ellenton Ice and performed in several shows at the rink before becoming a coach.

Kelly Paige of Sarasota, has been a coach at the rink since the facility opened in 1999.

James and Vicky Black, of Ellenton, skated with Disney on Ice.

Amanda Evora, of Sarasota, was a 2010 Olympian. 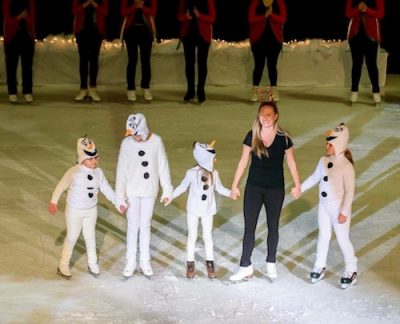 Ellenton Ice coach Peterson, of Sarasota, was also a 2010 and 2014 Olympic coach, but he will be traveling with Stellato and Bartholomay in Europe during the show.

As figure-skating director, Raley is responsible for organizing the annual holiday skating showcase, but her job also includes planning all figure skating activities at the ice complex and scheduling all rink time.

“I’m responsible for keeping all figure-skating activities going,” she said.

Raley has been with the Ellenton Ice and Sports Complex almost from the beginning.

Raised in a northern suburb of Toronto, Raley has been skating most of her life.

“In Canada when you’re little, you learn how to skate,” she said. “My mother started me with lessons when I was 4 years old.

“I was competing in singles and pairs since I was 6,” Raley said.

She joined Disney on Ice when she was 18 years old and toured with the company for several years until 2000, when she moved to Parrish with her husband Bill Raley.

Bill works for Feld Entertainment in Palmetto, which produces Disney on Ice and other shows, installing the ice floors in venues around the country.

The couple has two children. 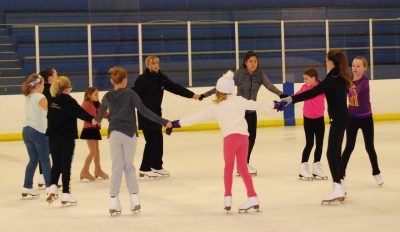 Ellenton Ice and Sports Complex figure-skating director Shannon Raley, center in black jacket, runs through a routine with her skaters during rehearsal for the annual holiday show, “A Skating Spectacular.”

A daughter, Heidi, 12, who also will be skating in the holiday show, attends Buffalo Creek Middle School.

Tickets for “A Skating Spectacular” are now on sale at the Ellenton Ice and Sports Complex. They are $11 per person.

The 3 p.m. show was almost sold out, Shannon said.

If you are out of town for the holiday production, the Ellenton Ice skaters will be putting on another show in June.

For more information about Ellenton Ice and Sports Complex, call 941-723-3663 or visit its website at www.ellentonice.com.