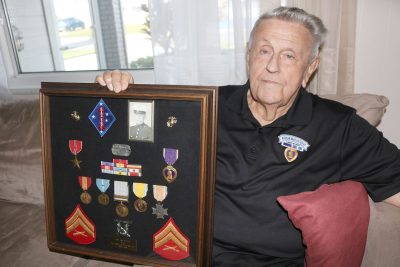 STEPHEN FLANAGAN JACKSON PHOTO
Korean War veteran Marine Corporal Jim Dixon, now a resident of Sun City Center, displays the 11 awards presented to him for his combat actions just hours before the July 27, 1953 truce, which “ended” the fighting between the U.S. and UN forces and the North Korea Communist government, which was backed by the Soviet Union and Red China.

SUN CITY CENTER — He asked to join the military and, once in, he asked for front-line duty. And even though wounded, he asked to be sent back to the trenches in face of a strong enemy attack. These three requests were granted summarily and quickly. He also asked for his second Purple Heart or Gold Star. This request, however, took 65 years of waiting and wading through governmental red tape. But like the previous requests, Jim Dixon, although only recently, saw this particular, and well-earned request granted.

The soon to be 87-year-old Dixon is “still going strong.” Originally a native of Dansville, a pastoral village nestled in the Finger Lakes region of New York, Dixon lives with his wife Elaine in a comfortable home in Sun City Center. He is the father to four children from a previous marriage. Dixon is now far away from the cool summers and piles of winter snow and ice where he grew up and lived half the year in Upstate New York until the Dixons permanently made the move to Florida three years ago and shed the snowbird tag after 24 years of commuting the 2,600 miles round trip. 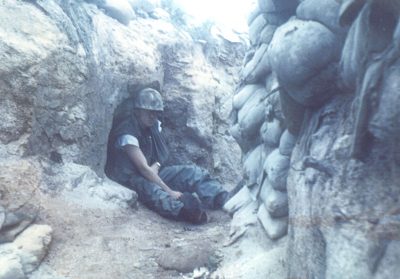 STEPHEN FLANAGAN JACKSON PHOTO
Korean War veteran Marine Corporal Jim Dixon, now a resident of Sun City Center, displays the 11 awards presented to him for his combat actions just hours before the July 27, 1953 truce, which “ended” the fighting between the U.S. and UN forces and the North Korea Communist government, which was backed by the Soviet Union and Red China.

But it was the time spent as a U.S. Marine in the Korean War where Dixon narrowly missed being killed by the marauding horde of Red Chinese just hours before the conflict-ending truce, that define Dixon whose trials and tribulations have been a piece of cake comparatively, since sustaining the life-threatening shrapnel wounds from mortars and hand grenades.

Recently discussing his scrape with death, Dixon has gained a few pounds in those 65 years. The many wounds and surgeries he had as a result of the battle have left him officially disabled.

Dixon may not get around as adroitly as he did in combat or in his younger days, but his eyes and mind are as sharp as ever. After years of frustrating correspondence with the U.S. government and Senators Hillary Clinton and John McCain concerning his various awards and medals, on July 11, 2018, the Board for Correction of Naval Records finally notified Dixon that he would receive his second Purple Heart Medal (actually a Gold Star) and a one-time replacement set of all his eligible awards, which include a Bronze Star Medal, Purple Heart Medal with one Gold Star, Combat Action Ribbon, Marines Good Conduct Medal, National Defense Service Medal, Korean Service Medal, Republic of Korea Presidential Citation, U.N. Service Medal, Republic of Korea War Service Medal and  Rifle Sharpshooter Badge.

Dixon served the Marines during the Korean War. He enlisted in September 1952 and was honorably discharged in June 1954.

Dixon was injured the first time on July 24, 1953. With his arm in a sling, Private First Class Dixon and the other Marines were under bombardment from the enemy.

The injured soldiers were evacuated to an isolated area. Dixon recalls his lieutenant coming into the evacuation area seeking soldiers still willing to fight the enemy.

“I thought there was no other choice, and if I were going to die, I might as well get up and fight,” said Dixon.

Dixon recalls getting up from his stretcher to fight. He remembers going into combat, then hearing a fellow Marine holler “grenade.” Some men lost limbs. Dixon was injured again, but this time more severe.

“I don’t like heights,” said Dixon. “I remember being scared in the airplane.”

He was then transported to a military hospital on Long Island where he received major surgery. He spent 10 months hospitalized.

No records showcased his hospitalization, which caused delays in Dixon receiving his earned awards. He battled for and finally received all his military awards because, “I want to show my children and grandchildren my accomplishments.” Now, with all that finally settled, Dixon in November 2018 could rest easily in the month honoring veterans, as well as give another round of thanks on yet another Thanksgiving Day for his near-miraculous survival 65 years ago and to this day.