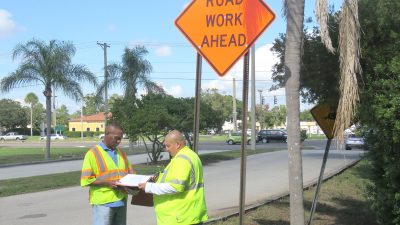 Travelers on S.R. 674 in Sun City Center have known for months that changes were coming. They have watched roadside workers as utility companies did some “prior to construction” work. Now they are beginning to see even more orange barrels as the Florida Dept. of Transportation (FDOT) contractor, Russell Engineering of Bradenton, starts preparatory cleanup work along the roadway. Schedules for construction affecting traffic are still fluid, but that work is not expected to start for a few more weeks.

Completion date for the 2 and one-half mile, $10 million project is targeted for fall 2020, but FDOT acknowledges that weather days, holidays and special event days can affect the end date. At the end of the project, residents can expect to see S.R. 674 between Commercial Center Drive and U.S. 301 completely repaved with added turn lanes, extended existing turn lanes and a sidewalk along the north side of S.R. 674. The FDOT will also be making numerous drainage improvements and replacing traffic signal heads along with new overhead lighted street signs.

The improvements should result in less congestion by getting traffic out of the through lanes into the new and improved turn lanes. The changes include new right-turn lanes at the following locations: Hospital Drive, Prince of Peace Catholic Church, Valley Forge Boulevard, Sun City Center Plaza, Ray Watson Drive and Augusta Drive; also, both eastbound and westbound Del Webb Boulevard. Other turn lane work includes: Lengthening the existing eastbound right-turn lanes at Kings Boulevard, Ray Watson Drive and S. Pebble Beach Boulevard; lengthening both the left- and right-turn lanes (westbound) at Pebble Beach Boulevard; and adding a second eastbound left-turn lane at U.S. 301.

“Our objective is to partner with everyone involved to finish the project with the least impact possible,” said Construction Manager Shiva Moonian. She assures us that they are aware of resident concerns about traffic disruptions, especially for emergency vehicles, and safety will always be a consideration as they make adjustments to schedules.

Sam Sudman, the SCC community liaison with FDOT, praised their cooperative attitude. “The FDOT recognizes the potential impact this project and construction will have on our residents. The contractor and quality control consultant, hired by FDOT to oversee the project, met with me and other community leaders to explain all aspects of the project, seek our concerns and provide us with the names and contact information of key personnel, should any problems or questions arise. I am maintaining contact with them for project updates,” he said.

John Luper, president of the Greater Sun City Center Beautification Committee that maintains the S.R. 674 medians, said that FDOT representatives had met with their group multiple times as well. “The landscaping and irrigation in many areas will be affected and coordination with the contractor will be critical to get through the next two years. Likewise, to keep residents informed, FDOT staff have reached out to the SCC Community Association and Kings Point leadership to answer questions. With the website they have developed, everyone can keep track of what weekly plans are and locations that may affect traffic conditions. We appreciate their efforts and are hopeful that once work begins our residents have minimum complaints and concerns,” he said.