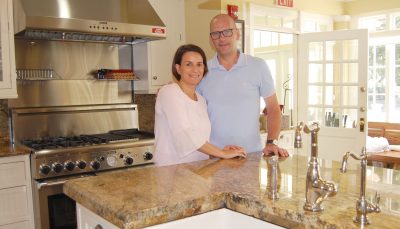 Palmetto Riverside Bed and Breakfast owners Meike and Wim Lippens, who moved to Palmetto from Belgium specifically to open a bed and breakfast, stand in their modern kitchen.

When the Lippens family opened the Palmetto Riverside Bed and Breakfast in September 2009, they wanted to share with their guests the traditional European hospitality they grew up with in their native Belgium.

“We always liked hospitality and getting to know people and other cultures,” said Wim Lippens, who purchased the historic 105-year-old home at 1102 Riverside Drive, Palmetto, with his wife Mieke in 2008.

“After eight years of searching from Naples to Tampa we found this house, and we thought it was a feasible building for a bed and breakfast,” Wim said. “We picked Florida because it is a tourist destination, and it’s warm since we come from Belgium where it’s cold.”

Lippens also was familiar with the area because he was an exchange student at Southeast High School during the 1989-90 school year.

Another reason the Lippens were sold on the location was because the house was kind of unique.

“We knew it was a Sears Home,” Lippens said, “which sounded kind of neat.”

Renovation of the home took about eight months to a year, he said.

Because the home is listed on the United States National Park Service’s National Register of Historic Places, all of the exterior renovations and additions had to conform to the original design. 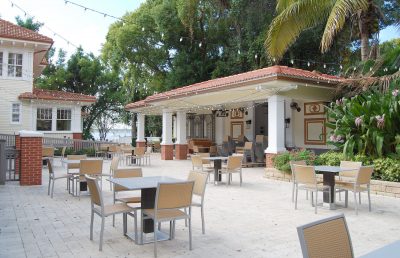 The Lippens added an outdoor living room with a fireplace and marble-floored patio so they can accommodate larger weddings and events.

According to the Florida Historic Landmark sign in the front yard of the bed and breakfast, the home was “built for Julius Lamb, a prominent Manatee County pioneer.” Julius Lamb was the son of Samuel Lamb, founder of Palmetto. Julius Lamb lived in the home with his wife Lillie.

The Craftsman-style home was ordered from the Sears, Roebuck and Company catalog, delivered as a kit by rail to Tampa and transported by barge to the Palmetto waterfront site on the Manatee River.

The Sears’ Modern Home program offered 22 styles of homes of various sizes and prices between 1908 and 1940.

“Entire homes would arrive by railroad, from precut lumber, to carved staircases, down to the nails and varnish,” the Sears Archive website shows. “Families picked out their houses according to their needs, tastes and pocketbooks.

“Sears provided all the materials and instructions, and for many years the financing for homeowners to build their own houses,” the archives continued.

The model the Lambs picked was “one of the largest and most luxurious available,” according to the historical marker at the bed and breakfast.

“We opened in 2009 and started with four guest rooms upstairs while our family lived downstairs in very small quarters,” Wim said.

Since their first day of business, the Lippens have continued to make improvements to the home and their bed and breakfast business.

In 2011, they added onto the original building with two guest suites. 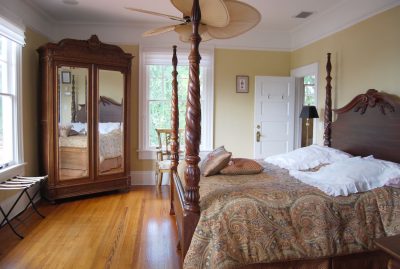 The Palmetto Riverside Bed and Breakfast has three guest rooms and three guest suites, all with private baths. Wim and Mieke Lippen completely renovated the home after they purchased it in 2008, but kept the original wood floors, doors, and fine woodwork.

There are now three full suites and three spacious guest rooms, all with private baths.

Then because they were getting more wedding parties as guests they added a reception hall onto the back of the home in 2012.

In 2013, they built a home next door for their living quarters because the living space in the main home was too small.

“The design (of the new home) is a duplicate of the Sears Home, just on a smaller scale,” Wim said.

With the wedding portion of the business growing, in 2015 they built an outdoor living room to accommodate more people for wedding receptions.

When they first opened they could have 16 party guests, now they can have 150 with the reception hall, the patio, and outdoor living room, Lippens said.

Then to capitalize on the dining area they used for breakfasts, in 2017 they opened Dining@Palmetto Riverside to the public, serving prix fixe three- or five-course dinners.

For a set price, diners get to choose from two menus, the Royal Palm or The Riverside Tasting, that offer an appetizer, soup and/or salad, a fish and/or meat entrée and dessert.

Dining@Palmetto Riverside is open from 5 to 9 p.m., Monday through Thursday, and reservations are required. 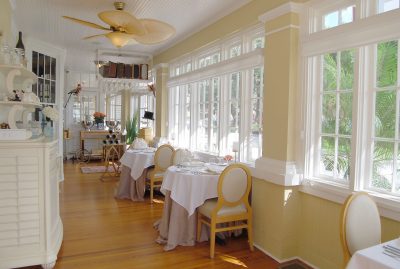 The menus change on a regular basis.

The Lippens attribute their success to hard work.

Mieke agreed, but added they love what they do.

And then they have to spend the rest of the day cleaning and getting ready for the new guests.

“But it’s meeting people from all over the world and learning about their culture and their travels all over the United States that I like,” Mieke said.

“When we opened in September 2009, our first guests were from Sweden,” Wim recalled. “They saw the sign (out front) and stopped.

“They were going to stay only one night, but ended up staying for a week,” he said.

In the beginning they advertised on their website, but now marketing is mostly word-of-mouth.

“The reviews (on websites such as TripAdvisor) bring our guests here, and the best thing is that people want to meet us (after reading the reviews), Mieke said.

“Also we have returning guests who want to know about our girls (Manon, 17, and Maxence, 15),” she said. “People feel right at home here. Some even show up for breakfast in their pajamas.”

The Palmetto Riverside Bed and Breakfast has a five-star rating on www.TripAdvisor.com and www.WeddingWire.com.

“Most of our clientele are within a two-hour drive from us,” said Wim “but we do have wedding guests from all over the United States and some even from overseas.”

But the Lippens are not resting on their laurels with all the accolades and awards they received.

Before the end of the year they will open a new restaurant and wine bar call Château 13 on 13th Avenue West in downtown Bradenton.

“If you don’t look forward, you’re going backward, said Wim. “You have to look for the next opportunity. Life changes. Everything evolves.”

For more information about the Palmetto Riverside Bed and Breakfast, visit their website at www.palmettoriverside.com/bnb/, or call 941-981-5331.

For more information about the Sears Modern Homes program, go to the Sears Archives online site at www.searsarchives.com/homes/history.htm.

An interesting article on the Lamb homestead can be found on the Palmetto Historical Park website at https://palmettohistoricalpark.com/just-next-door-article/.

And read the “London Daily Mail” article on Sears Modern Homes where the Palmetto Riverside Bed and Breakfast is mentioned at https://dailym.ai/2Rfca7i.