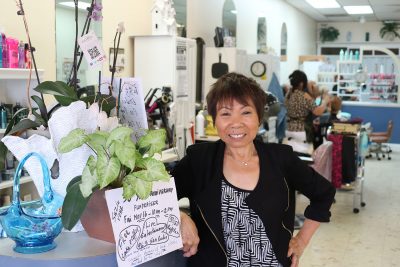 STEPHEN FLANAGAN JACKSON PHOTO
Suzie Vong celebrates 30 years in business at her salon The World of Suzie Vong. There will be a celebration on Friday, Nov. 16, at the salon in Cypress Village Shopping Center from 10 a.m. to 2 p.m.

From Saigon to Sun City Center by way of Ruskin. That, in a small nutshell, is the life of Susie Vong.

Vong had to flee her native country of Vietnam in 1972 shortly before South Vietnam collapsed and fell under the control of North Vietnam and its Communist government in the mid-1970s. Even though Vong was not an official member of the U.S. armed forces, she worked as a secretary for the U.S. Army in Vietnam, so she is certainly entitled to celebrate November as an unofficial and honorary veteran.

Now, about 46 years and approximately 9,550 miles removed from those tumultuous and unsettled times in Saigon where she grew up and attended high school, Vong is firmly ensconced as a small business owner in Sun City Center where she was even selected as the first honorary mayor in 2015.

This Friday, Nov. 16, Vong celebrates 36 years living and working in Hillsborough County, with 30 of those at her present address in the Cypress Village Shopping Center in Sun City Center where she and her associates provide complete hair, nail care and permanent makeup services. Vong is planning a 30 year anniversary fundraiser from 10 a.m. to 2 p.m. at The World of Suzie Vong, her full-service salon for men and women where her business has been located since she moved there after six years on 33rd Street in Ruskin.

Sponsoring the anniversary along with Vong is the American Business Women’s Association, or ABWA.

“Like previous years, we put on a fundraiser to give back to the community,” stated Vong with a welcoming smile across her face earlier this week. “In the past we have had fundraisers for teacher of the year, disabled veterans, Shriners Children’s Hospital, Kiwanis, Red Cross, Mary Martha House, and more.

“This year we are fundraising for victims of Hurricane Michael,” said Vong.

The anniversary will include raffles, live entertainment, live broadcast by 96.3 Sun Radio and free snacks.

“My priority here at the salon business is to provide great customer service and to keep everyone happy,” exclaimed Vong, who anticipates more anniversaries and satisfied customers in the future, “as South Shore becomes a bigger and busier city.”