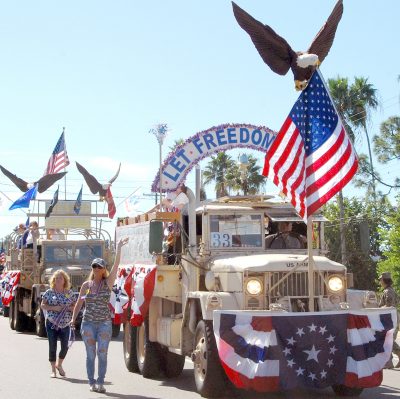 “We’ve been hosting the parade for the past four decades,” said VFW Auxiliary member Lois McBride, who co-organized the event with Tony Zipperer, a veteran and longtime post member. “We’ve done it all these years to honor present and past members of the nation’s military and as a community outreach.”

Members of 56 organizations will toss beads and candy to bystanders as they walk a mile or so along U.S. 41. The parade starts promptly at 11 a.m. at Shell Point Road and will end just shy of 19th Avenue N.E. near the old K-Mart.

Several thousand people are expected to attend. Those who arrive a bit early, say around 10:40 a.m., will get to see a parachute group jump as like last year to kick things off.

Ruskin Memorial VFW Post 6287, 5120 U.S. 41 N., Apollo Beach, will host a public after-parade cookout and awards ceremony after the parade ends at around 1 p.m. The post will sell burgers and macaroni salad for $5 and hotdogs with chips for $4.