VA PHOTO
The VA’s South Hillsborough County Community Based Outpatient Clinic (SOHI) in Riverview is on schedule for opening next spring.

“These two meetings in Sun City Center have been the largest I have seen in my career with the VA,” said Joe Battle, director of the James A. Haley Veterans’ Hospital and Clinics. He was reacting to the town hall turnout of about 600 to hear his update on the new VA clinic being built in Riverview.

This gathering was not just an informational meeting — the VA brought a cadre of personnel from Enrollment and Eligibility. Veterans could register to move their primary care to the new facility and veterans who were not already in the system could also talk to representatives about enrolling. Representatives from other departments such as Women’s Health and Mental Health were also on hand dispensing information about services available at James A. Haley Veterans’ Hospital and Clinics.

Battle said they are currently compiling the list to be used for transferring patients requesting primary care at the new facility and encouraged veterans to get their wishes on record as soon as possible, either by talking to representatives on site or by contacting their primary care doctor. He was optimistic about the planned capacity of 10,000 meeting current needs but they expect the clinic to fill quickly. Answering a question about future expansion there, he said there was land available at the site to do so.

Battle assured the veterans that not changing doctors would in no way affect their ability to use the new clinic for auxiliary services such tests/labs and audiology—to name a few of the 14 services to be available there. 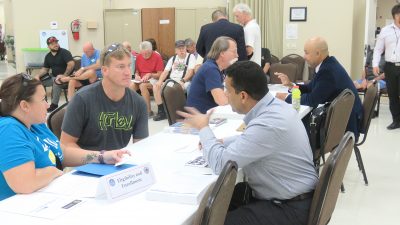 PHYLLIS HODGES PHOTO
Air Force veterans Elizabeth and James Pearson (relocating from Virginia to Apollo Beach) were among the hundreds who seized the opportunity to talk to Enrollment and Eligibility representatives at the VA Town Hall in SCC.

The $44-million project includes a 50,000-square- foot building similar in design and function to the Primary Care Annex near the Fletcher Avenue and I-75 exit in Tampa. A firm opening date is not yet set, but they are targeting spring 2019 to have staff and equipment in place.

Battle also talked about the 136 single-bed patient rooms being added to the Tampa VA complex on Bruce B. Downs Boulevard, and he outlined parking options during construction. Updates on the three-year project are available at www.tampa.va.gov/bed_tower.asp

Chapter 110 of the Disabled American Veterans sponsored both this town hall and the first one in March. Disabled American Veteran member Bill Hodges, host of Sun Radio’s Veterans Corner and an activist for veterans’ issues, coordinated and emceed both events. Commander Bill Adkins pointed to the DAV motto which read: Fulfilling Our Promises to the Men and Women who Serve. Adkins said, “This is one more way we can do that.” He invites any honorably discharged veteran with a military-connected disability to contact them for information or assistance at 813-546-1631.