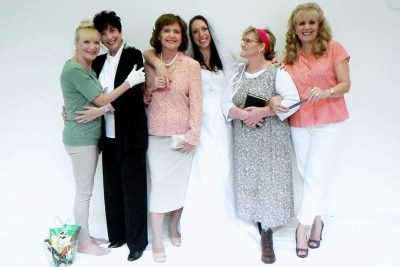 One of the most memorable movies of all times is about to be performed on stage at the Veterans Theater in Kings Point this month.

Robert Harling’s Steel Magnolias will be presented by The Pelican Players Nov. 8 to 11 in three evening performances and two matinees.

“It’s a wonderful play, full of diverse, interesting characters,” said Mary Winter, Pelicans Players’ president. “It’s a good story about friendship (that includes) lots of laughter and some tears. The audience will truly enjoy it.”

The dramedy is being produced by Winter and co-directed by James Williams and Kevin Steinke. Joy Dunn is stage manager for the play.

Steel Magnolias was based on playwright Harling’s memoirs of his childhood and the experience of his sister’s death in 1985 due to Type 1 diabetes. As the name of the play implies, its female characters are as delicate as magnolias but as tough as steel.

“It’s (centered on) a group of ladies in a fictional Louisiana town who live in the same neighborhood and have known each other for years,” Steinke said. “It’s about people helping people through the good times and bad. The story includes a birth, wedding and funeral. It covers the whole cycle of life.”

Williams has another take.

“For me, it’s more about inner strength in getting through life experiences and being there as a pillar of strength for friends and family who need support,” he said.

Guests are invited to bring their own beverages and snacks.

Tickets are $15 per person for either cabaret-style or cushioned, stadium seating. They can be purchased at the door or in advance at the Kings Point Box Office, inside the North Club at 1900 Clubhouse Drive, the same address as the Veterans Theater. It’s open from 8:30 a.m. to 4 p.m. weekdays. For information, call 813-634-9229.

Folks living outside Kings Point should drive to the visitors’ gate and inform the guard they’re there to acquire tickets for the show.

Founded in 1980, the Pelican Players is a 501(c) 3 community theater group. Proceeds from its plays; free Readers Theater presentations; for-hire murder mystery dinner theaters; and Cabaret Singers provides scholarships to Hillsborough County students going into the arts. More than $500,000 in scholarships have been awarded since its inception.

The club is always looking for actors, stagehands and others willing to help with set design or costuming. Experience is helpful but not required, and all area residents are invited to participate and join.

For more information on the Pelican Players, visit www.pelicanplayers.org or call 813-633-7681.

Who: The Pelican Players

Cost: $15 per person, cabaret-style or stadium seating; BYOB and snacks.