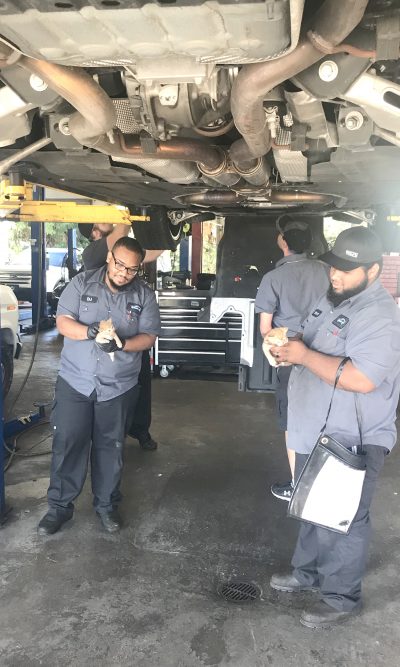 Carriage Works Auto Center mechanics are shown holding the kittens they rescued from a vehicle’s engine.

APOLLO BEACH — Legend has it that cats have nine lives. That would mean three cats have 27 lives!

A trio of cute, naive kittens must have used up quite a few of this total non-actuarial estimate prior to their rescue last week from an automobile motor where they had unknowingly sought refuge.

The vehicle belongs to Melissa Davis, a realtor in Apollo Beach. The extrication of the helpless, young felines took place Oct. 26, but the narrative for this heartfelt story actually starts the week prior when Davis thought she heard and saw a mother cat and several kittens scrambling for cover under her son’s car in the driveway where she speculated someone had dumped them. She thought nothing more of it at the time, assuming the mother cat had toted her 5-week-old babies by the napes of their necks to a safer locale.

The narrative picks up again Friday morning, Oct. 26. Davis dropped her children off at school and then stopped by the drive-through pick-up at the CVS Pharmacy on the corner of Apollo Beach Boulevard and U.S. 41.

While in her car waiting in line, Davis imagined that she heard a kitten’s muted meowing. But she was not imagining. She was not hearing things. The customer in the car next to Davis was hearing the same “wistful meows.” She told Davis little sounds were percolating from Davis’ car.

Davis says she then cut off the motor and popped the hood of her vehicle.

“Stuck inside among the motor parts I could see a kitten,” she recalled with astonishment. “It was one of the kittens from last week!

“I couldn’t believe a kitty had been under the hood while I was driving around,” she said. “I prayed that the other two kittens we saw the previous week weren’t wedged in there too…and were hurt or killed (or had fallen out and been run over).”

The lady in the other car immediately called the fire department and animal rescue. “Neither could help,” said Davis. “So I decided to call Carriage Works Auto Center down the boulevard to see if one of their mechanics could come help.

“They were there in five minutes,” she recalled, super-relieved.

A CVS employee, responding to all the fuss and attention outside the store, brought out an opened can of cat food in an attempt to lure the kitty out from in between the engine block and the air conditioner fan belt. No luck, as the baby animal shivered with fear and trepidation.

One of the Carriage Works mechanics on the scene told Davis it would be safe to drive her car to their automotive center shop a few blocks down the boulevard.

So slowly Davis made that short trek. Under the hood for who knows how long, all that was necessary was five more minutes of holding on tight for dear life. 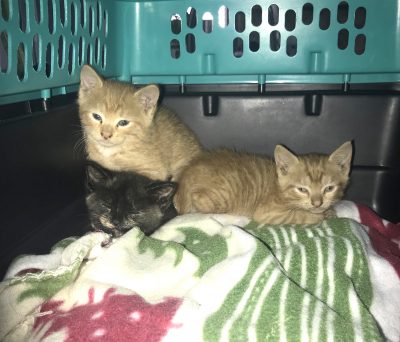 All three kittens rescued from the engine of a vehicle by the staff at Carriage Works Auto Center have been adopted and now have “forever” homes.

Realizing that they could not entice or dislodge the one visible kitten out from the motor under the hood, they put the car up on a lift. Dismantling the oil pan and other plastic and metal underpinnings, they pulled out one little dark gray cat , twisting and meowing. Then another mechanic pulled out another little orange kitty, hissing and scratching all the way. And finally it was a triple play as one more apprehensive orange kitty was gently removed, rescued by the strong, steady oil-covered hands of a mechanic. No team of obstetricians has ever performed a better delivery job. All three babies were wrapped in a blanket, secure and ready for the balance of their lives, somewhere, anywhere, other than under a car hood or splattered on a lonely asphalt road.

“I cannot say enough about the lady at the drive-through next to me as well as the CVS pharmacy staff,” said Davis in retrospect. And as for the absolutely amazing mechanics at Carriage Works…thank you all so much!” exclaimed Davis. “I’m sending a thank you lunch to them at Carriage Works now. It’s the least I can do for their sweet act of kindness.”

Davis continued her benevolent acts of charity, taking the kittens for a de-worming to the veterinarian at About Pets near her office, Dr. Mark Wallace. Wallace and his wife, Gloria the vet tech, told Davis all three cats “will be fine.”

Davis and her family could not adopt any of the cats because they already have two dogs “ and my husband is allergic to cats!”

Davis had one of the kittens adopted almost instantly but that offer fell through when the young lady hoping to take one of the kittens discovered her lease only permitted one pet. She already was at that limit. But in rapid order that Friday night, one lady adopted the little dark one. Then a disabled, lonely woman took in the orange pair for a “forever” life.

“These babies will have a happy ending,” promised Davis.