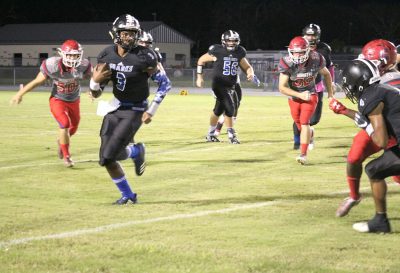 RIVERVIEW — The Riverview Sharks and the Manatee Hurricanes teamed up for 11 touchdowns last Friday night on the Sharks’ home turf.  The visitors from Bradenton doubled up on Riverview, however, coasting to a 56-28 win to keep their district title hopes alive, at least for a week.

Coach William Mosel’s Sharks, 3 wins and 6 losses on the season and 1-4 in district, had plenty of effort but could not stay on the field offensively or defensively, with the dominant Hurricanes, 6-3 and 5-1.  The visitors jumped out to a 21-7 first-quarter lead, increased that margin to 35-14 by halftime and then extended out to a comfortable 49-21 lead at the end of three quarters before going in to cruise control.  Both teams made it to the end zone once in the final stanza for the ultimate 56-28 score.

The Sharks now have the unenviable task of taking on another powerhouse from south of Hillsborough County — the  Riverview Rams in Sarasota.  The Sharks are fighting to stay out of the district cellar while the Rams can clinch the 8A-District 6 title by skinning the Sharks. To make matters worse, Riverview Sarasota is a point-producing machine, averaging almost 33 points per game while giving up 20 points per game on average.  Meanwhile, the Sharks have scored 156 points in 9 games for a per game average of a tad over 17 points a game.  Defensively the Sharks’ stats come out to 26.6 points per game yielded, coughing up 240 points in their 9 games.  On paper, the Sharks could be in for a long night this  Friday, but the game will not be played on paper; however, it will be on grass in Sarasota. 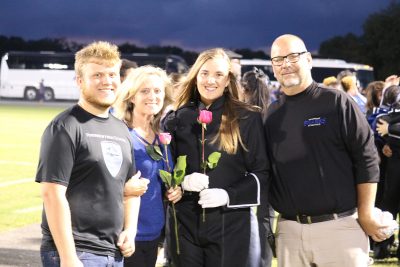 Mosel’s team posted a few highlights on offense and defense.  But the Hurricanes blew in to Hillsborough County,  stirred up some highlights of their own with seven touchdowns,  and departed seeking their tenth consecutive post-season appearance. 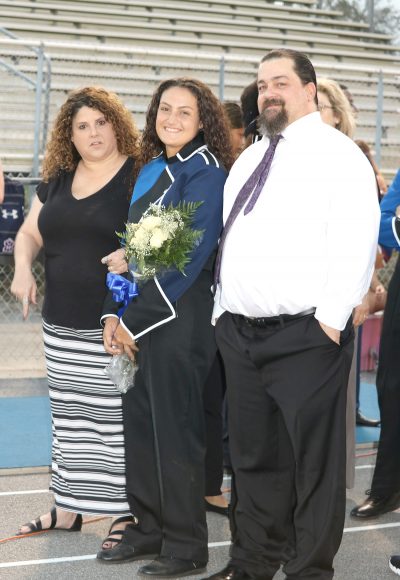 Riverview spotted the Hurricanes a 14-0 first quarter lead before   senior TJ Robinson gave the large home crowd on senior night something to shout about. With  about 7 minutes left in the opening quarter, Robinson fielded a Hurricane kickoff and returned it 91 yards to cut the Manatee lead to 14-7.

Riverview added another TD  on a Barry Wyche III sneak just before the end of the first  half, but Manatee continued to answer, scoring on a 25-yard run with only seconds on the clock before intermission to make it 35-14.

The second half was more of the same.

The Sharks crept a little closer in the third quarter on a Wyche scoring aerial of 25 yards to senior Michael Kelly to make it a 35-21 game in favor of Manatee.  The Hurricanes then picked up the tempo with two more scores in the third quarter before another Sharks’ senior, Jalen Weaver, hit paydirt  from 12 yards out with about six minutes remaining in the game. The Sharks were running out of clock and offense by now, however.  Manatee mopped up with a 12-yard scoring run by Lavontae Youmans to end the game at 56-28 in the waning seconds. 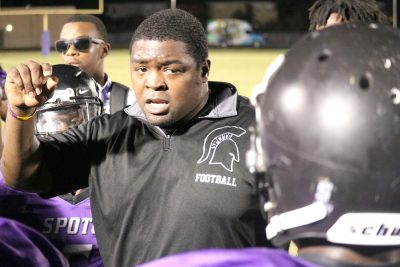 RIVERVIEW — Jefferson came to Riverview Friday night and returned to Tampa with a 43-27 hard-fought victory over the Spoto Spartans. Coach Melvin Jenkins’ Spartans fell to 3-6 overall and 1-3 in district.

Spoto has an off week to rest Kobe Smith this Friday before closing the season at Leto Nov. 2. Leto is winless overall as well as in district at 0-8 and 0-5. Unless the Spoto bus driver gets lost on the drive over to the Tampa school, the Spartans should bolster their record as the Falcons have only scored 18 points and given up 407 so far this season in which they have been everybody’s whipping boy. By contrast, Spoto has scored 140 points and coughed up 252 in its nine games so far.

After a well-deserved two weeks rest, look for Spoto’s #9 Kobe Smith to end his high school career on a high note statistically speaking. Statistically-speaking, Smith had another big night despite the Spartans loss to Jefferson, now 5-4 and 2-1.

After a first half at Trathowan Field, the Jefferson visitors from Tampa only led Spoto 17-13. The Dragons turned up the heat on a crisp, breezy night to win going away, however, 43-27. 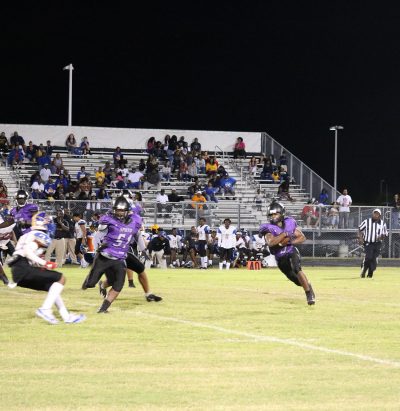 Who else but Spartans’ Koby Smith, #9, on one of his 27 carries in Jefferson game.

For the game, Spoto ran 34 offensive plays, 30 of them rushing plays. Of those 30, Smith carried the ball 27 times. Against Jefferson, the little senior workhorse continued to accumulate the real estate, as he netted 230 rushing yards, with a 38-yard dash the longest on a three-touchdown night. For the season, despite missing one game with a minor injury, Smith has piled up 1,231 yards rushing with 155 carries, which works out to 7.9 yards per carry and 153.9 yards per game. His longest run of the year has been for 80 yards, and Smith has made it to the house 11 times. To put that in perspective, the entire Spoto team has tacked on only 168 more yards rushing than Smith’s season total, and registered no rushing touchdowns in addition to Smith’s 11.

Coach Jenkins’ Spartans had plenty of contributors other than Smith in the valiant effort against Jefferson in the seniors’ last game of their careers at home. Among the seniors slowing down the Dragons was #20 Marcus Cobbins, as usual leading the way defensively. Cobbins was aided on defense by Marwan Gilmore, Miyon Hampton, Raynall McCutchen, Jalen Bard, Anthony Powell, Jamarre Lovett, Eric Johnson and Yantee Hines. Senior Jerson Singleton played at quarterback and at wide receiver, throwing 1 for 6 for 31 yards and catching 1 for 36 yards and a score. Senior Eric Lee also caught a couple of passes for 71 yards and senior Gilmore grabbed an aerial for 12 yards.

Despite the loss of a number of outstanding seniors, Jenkins should be set for a number of years at quarterback with Jordan Guerad returning for two more years after a breakout sophomore year on offense and defense. Against Jefferson, the chunky Guerad was in on 4 tackles, completed 3 of 4 passes for 88 yards and a TD, and had a busy night handing off to the indefatigible Smith.

DOVER — East Bay made quick work and mincemeat of the weak Strawberry Crest Chargers last week 42-0. Now, the Indians turn over the hapless Chargers to another South Shore team this Friday, the Lennard Longhorns, licking their chops to get a crack at Strawberry Crest in an effort to avenge last season’s loss and to double their season win total.

While Lennard welcomes the Dover visitors to Ruskin prior to a season finale with tough Hillsborough at home on Nov. 2, East Bay has an off week before traveling to Tampa for its last regular season game with Blake. Indians’ coach Frank LaRosa’s team will carry its 5-4, 2-4 record into the Nov. 2 Blake game looking to finish over .500.

Last Friday night, East Bay exhibited an overabundance of speed, power and savvy to overwhelm Strawberry Crest, the cupcake of Hillsborough County. Coach Rich Hawn’s team actually won a game in its second game of the season, posting its lone victory over King 7-6 en route to a 1-7 and 0-5 season worksheet with the Lennard game remaining.

Eschewing the pass, except for one completion in one attempt, East Bay roared to a season-high rushing stat of 443 rushing yards along with a season-high TD total of 6.

It was a waltz for LaRosa at Dover, as the Indians scored early and often.

An Indian 14-point first quarter output was repeated for a 28-0 halftime lead. LaRosa eased up on the gas pedal in the second half. But no mind. The Indians continued to roll with 7 in the third period and 7 in the final stanza. Defensively, a shutout was never in doubt as East Bay’s defense buckled their chinstraps and came to play in the 42-zip whitewashing.

Sparkling stats for the night included the season-long rushing duo senior Joaquin Isidro with 187 yards on 15 carries and senior Tre Everett with 106 yards on 7 carries and Everett’s icing on the cake with 3 touchdowns. Seniors Zaron Wright and Kaleb Bertrand got in on the rushing fun in a big way, both scoring TDs. Wright had the longest jaunt of the night, a 67-yard burst for a score. Junior quarterback Cam Peternell was not outdone as he tallied one TD on 3 carries and was 1-for-1 in passing.

Defensively, all you can say is that it was a team effort for the Indians who dominated both sides of the ball with the likes of Levi Marshall and two-way stalwarts such as Everett and Isidro. 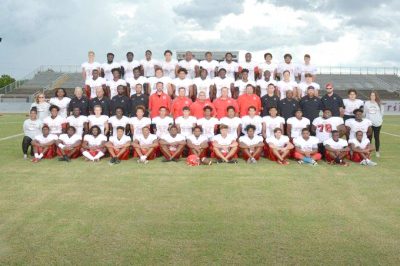