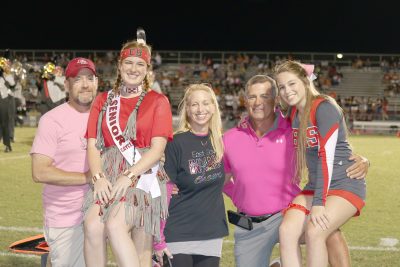 East Bay High honored seniors associated with the football program at last Friday’s game against Lennard High School. Included were Reese Ferguson, father of Caycee Ferguson, above, who is a Brave Spirit. Others are Randall Davis and Suzette Davis, both East Bay grads, with their daughter, cheerleader Taylor Davis.

Both eye victory over Strawberry Crest 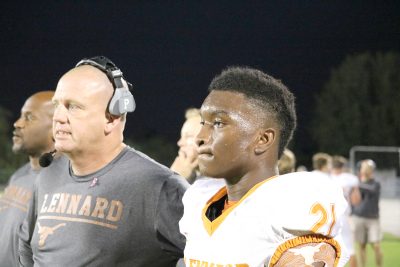 RIVERVIEW — The East Bay Indians jumped out front early and cruised to a 45-35 win over the visiting Lennard Longhorns in front of a large crowd on both sides of the field last Friday enjoying a low humidity and cool breeze.

The Indians, after a string of close losses, finally got a dead ringer and pushed their overall season record to 4-4 and 1-4 in district. East Bay takes on district creampuff Strawberry Crest at Dover this Friday. The Chargers are struggling at the bottom of the district at 1-6 and 0-4. East Bay then ends regular season play in Tampa on Nov. 2 at Blake.

The Lennard Longhorns of coach Matt Kitchie, meanwhile, get an off week before two home games to conclude the season. First up is hapless Strawberry Crest Oct. 26. Then the finale against Hillsborough and its legendary coach Garcia on Nov. 2. Lennard is still searching for a second win after beating Blake in Tampa Aug. 24. The 0-5 and 1-7 Longhorns are hoping to accomplish two milestones for the season: Move out of the District cellar and notch a home field win.

In the game last week on Big Bend Road, the Caterpillar factory in Riverview may have been scouting for some new patents in the rivalry game between East Bay and Lennard which featured some bulldozers in a bruising ground game by both teams. 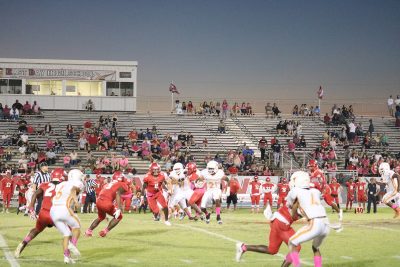 The Indians went on a scoring spree in the first half, chalking up a 24-7 intermission lead. Lennard, did not back down or throw in the towel, however, actually outscoring East Bay in the second half although the game was never in doubt. For the seventh time in eight games since Indians head coach Frank LaRosa assumed the reins in 2011, the red, gray and black clad squad emerged as the winners.

Like a hard charging dirt-moving machine, Lennard’s running back Tito Hunt, #21, had a busy night even by his standards. The junior toted the pigskin 32 times, accumulating 186 hard-earned yards for a pair of touchdowns against a stout East Bay defense that stacked the box against him all night. With the big guys plowing up front on the offensive line, Hunt’s longest run was for 19 yards. Showing he has good hands as well as tremendous, powerful wheels, Hunt also snagged four passes for 32 yards. Longhorn senior Mike Rigolizzo, when he wasn’t blocking for Hunt, carried 8 times for 23 yards and one trip to the end zone. 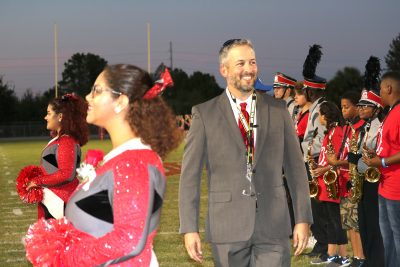 For East Bay, also relying heavily on its “three-yards and a cloud-of-dust” running game, it was much the same but a bit more distributed. The reliable senior workhorses for the Indians, Joaquin Isidro and Tre Everett, combined for 220 yards. Isidro cranked it up 16 times for 138 yards and 3 TDs. Everett pitched in with 10 carries for 82 yards and a pair of scores. For good measure, junior QB Cam Peternell called his own rushing number 4 times and responded with 73 yards. Peternell rarely went to the air, tossing 3 of 6 completions for 26 yards. But Peternell showed his versatile ground work by returning a Lennard kickoff 80 yards for a TD. East Bay’s senior place-kicker, Ewan Kenny, hit all 6 extra points as well as a 28-yard field goal. Defensively, it was the usual suspects for East Bay. Senior Levi Marshall had another big game, participating in 11 tackles. Johnny Oliver, another senior mainstay on defense all season, was in on 9 tackles. A pair of sophomores, Britton Pasco and Ethan Lyons, continued to perform well, participating in 6 stops each.

Lennard was down to its fourth-string quarterback. Former JV and freshman Gavin Henley acquitted himself well, handing off to Hunt and passing 13 times, hitting 7 for 73 total yards, including a 34-yard TD toss to senior Quatrell Carter. Senior Corey Freeman also provided a boost for Lennard with a second-half kickoff return for a score covering 78 yards. Freeman also scored 4 points on a pair of PAT conversions.

TAMPA — Coach Melvin Jenkins’ Spoto Spartans withstood a prolific passing attack and a fourth-quarter rally to earn its first district win 21-19 over the Middleton Tigers last Friday. The Spartans look for another District 10 win at home this Friday in Riverview against Jefferson, 4-4 and 1-1, in a battle in the standings behind unbeaten Jesuit. Spoto is 3-5 overall and 1-2 in district.

Spoto came to Tampa ready to play. The Spartans jumped out to a 7-0 second quarter lead. Middleton tied it 7-7 going into intermission. Spoto bounced back with 14 unanswered points in the third quarter. Then the Spartans turned it over to their defense, which hung on despite yielding 12 points in the fourth quarter.

In limited time of possession, Spoto only had 32 offensive plays all night. Thirty of those were running plays with senior Kobe Smith, #9, getting the call on 23 of those plays. Smith reeled off one 51-yard run en route to a 160-yard night carrying the ball.

Three other Spoto runners combined for only 5 more yards on 7 carries. In the strangest stat of the night, Spoto sophomore quarterback Jordan Guerard completed only 2 of 13 passes for the game. However, Guerard was 100 percent on his completions, as both went for touchdowns. One was for 73 yards to sophomore Caire Anderson and the other TD was for 33 yards to senior Marwar Gilmore. The Spartans second TD of the night was also somewhat unorthodox. Sophomore Carlisle Johnson, playing ferocious defense all night, stripped a Tiger running back of the ball and scrambled 36 yards for a Spartan score in the third period. Johnson, for the game, was in on 16 tackles. Defensive help came from Marcus Cobbins, a senior, who stuck his nose in on 12 tackles. Guerad, the two-way man, participated in 10 tackles.

Most of Spoto’s defensive night was spent defending passes from Tigers’ quarterback Gabe Weldon. The junior went to the air 40 times and completed 23 with no interceptions, 1 TD and 275 yards. The losing effort left Middleton 0-2 and in last place in district and 2-5 overall.

Jenkins said he is expecting another pass-oriented offensive flurry from this Friday’s foe, the Jefferson Dragons, who beat Wharton last week 35-0.

DOVER — The Riverview Sharks are hoping to climb out of a tie for the cellar in 8A District 1 football action this Friday night. Problem is: At the same time, Friday’s opponent, Manatee, is hoping to hold on to a tie for first place in the district.

Riverview just won its first District 1 game last Friday, a 13-3 defensive struggle over Strawberry Crest in Dover. Now, coach William Mosel’s Sharks, 3-5 overall and 1-3 district, host Manatee, which slipped to a tie for first in the district with Riverview Sarasota by losing to the Rams 24-13 last Friday.

The Sharks only generated 181 total yards on offense in the win on the road over Strawberry Crest, one of the weakest teams in Hillsborough County at 1-6 and 0-4. The Chargers hit a line-drive field goal to leap to a 3-0 lead over Riverview. But the Sharks tightened up on defense to hold Strawberry Crest scoreless the rest of the way while conjuring up a TD pass and a short TD run to seal the win despite two turnovers.

Trailing 3-0, Sharks’ lanky senior quarterback Barry Wyche rifled a pass over the middle to senior receiver Deontae Brown who hauled it in and scooted into the end zone to give Riverview a lead they never relinquished. Riverview made it a two-score game on a five-yard scoring run by Cameron Lyles to put the game on ice.

Manatee brings a high-powered offense to Riverview Friday night. The Hurricanes have put up 264 points this season and surrendered only 139. Compare this to Riverside’s offensive output of 135 points while giving up 184.

The Sharks continue a brutal season-ending schedule by traveling to Riverview in Sarasota Oct. 26 to face the other district co-leader, the Rams, 5-3 and 4-1 at this point.