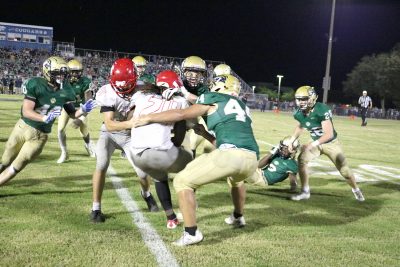 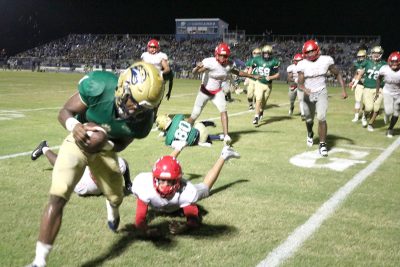 Durant’s Ty Brooks lunges for the goal line pylon and the tying touchdown against East Bay, forcing the overtime which was won by the Cougars.

All three words that coaches and fans do not want to hear after a tough loss.

But these three words tell the tale after East Bay fiddled around and fell from the ranks of the unbeaten at the hands of underdog Durant in Plant City Friday, 10-7 in overtime.

East Bay came into the game riding a three-game season-opening winning streak. By failing to score on two golden opportunities, Coach Frank LaRosa’s deflated squad bused back home 3-1 with a loss and an upcoming game in Gibsonton with the true Plant City powerhouse, the 4-0 Raiders. Durant tenaciously posted its first win to go 1-3 with 1-2 Strawberry Crest next.

The Indians struck first and easily at Durant. Joaquin Isidro hit Jayden Williams for a 43-yard scoring aerial and it appeared East Bay would waltz to a victory. Durant’s Cougars had another dance in mind: The upset dance. The Indians contributed to their own downfall with an interception in the second quarter. But the real calamity was late in the third quarter when East Bay’s offense finally woke up and was driving. Star running back for the Indians, Tre Everett, took a handoff over the left side from his own 45 and chugged down the sideline, struggling for the end zone near the Durant 4-yard line. However, with paydirt in sight, Everett was stripped of the pigskin by Durant senior Donnald Williams. Durant sophomore Audrea Thames plucked the ball out of mid-air and took off running, the other way, in front of a large, delerious Durant home crowd. Thames was not dragged down until reaching the Indians 45, the original line of scrimmage. The Everett non-score negated a possible two-touchdown lead. The Cougars had new life. East Bay was seemingly out of heart and out of gas.

The momentum switch allowed Durant to finally score on a 6-yard run and the extra point made in 7-7. Durant held East Bay scoreless the rest of the night, including the extra period when a Cougar 20-yard field goal spelled defeat for the shocked Indians.

Statistics are for losers, but here goes. East Bay had only 2 of 3 completions passing, but one of those was the early TD pass. Rushing-wise, the Indians never got it going. Everett carried 6 times for 69 yards, Isidro 19 times for 54 yards, and Zaron Wright carried 7 times for 37 yards. Defensively, East Bay was led by Levi Marshall, Tre Everett, Johnny Oliver, O. Onalaja, Britton Pascoe, Jaden Lopez, and Jontrell Oliver. 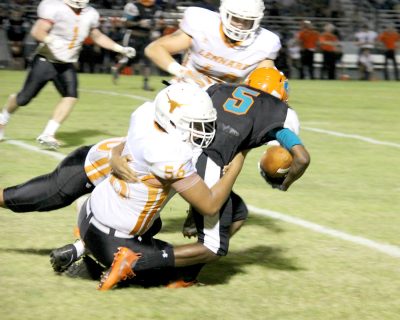 Lennard defender wraps up a Raider in loss to undefeated Plant City.

PLANT CITY — The devastating, leather-on-leather thud of a punted football being blocked by the opposition set the tone early as Plant City doubled up Lennard 56-28 last Friday. Lennard falls to 1-3 on the year with the district loss and now faces always-tough Bloomingdale in Ruskin this Friday night. Undefeated Plant City visits 3-1 East Bay in a district match-up.

With 6:35 left in the first quarter, Plant City’s Tyreke Harrison rejected a Longhorn punt, setting up the now 4-0 Raiders on the Lennard 15-yard line. A quick toss from QB Braxton Plunk to Mario Williams put Plant City on the board first. It was all catch-up for the Longhorns after that. Lennard never gave up, cutting the score to 35-28 in the third quarter, but the Raiders continued to roll, mainly behind the passing of QB Plunk who put up 16 of 21 for 254 yards and four scores.

Lennard cut into the Raiders’ 7-0 lead when Jah’tavis Philpart found a crease behind his offensive line and raced to the end zone. Lennard’s PAT was blocked and 7-6 was as close as Lennard would get.

After Plant City responded with another TD and point after, Lennard’s offensive line continued its good work and paved the way for a Tito Hunt 55-yard run straight up the gut. The two-point attempt was denied by the Raiders, making it 14-12.

Plant City quickly extended that lead to 21-12 by scoring on the ensuing kickoff. The back and forth continued as Hunt found the end zone again and Philpart followed suit on a two-point conversion. All of a sudden it was 21-20 with 5:43 remaining in the first half. Plant City, however, hit back with a rushing score and then a 43-yard TD aerial to move ahead 35-20 at the half.

Lennard continued its resilience in the third quarter with another Philpart rushing score. A two-point conversion made it 35-28. The Longhorns refused to wilt. However, Plant City slammed the door on Lennard the rest of the way, scoring 21 unanswered points to put its first district win on ice and preserve its unbeaten season.

The Longhorns’ main weapons on offense, behind some stellar offensive line play, were the duo of Hunt and Philpart. Hunt carried 22 times for 205 yards; QB Philpart passed for 62 yards on a 4 for 10 night and rushed for 63 yards on 19 attempts, as the Longhorns amassed 289 yards on the ground. 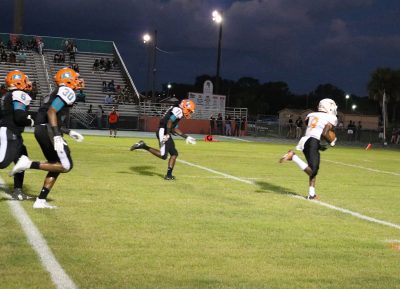 Jah’tavis Philpart, #9, breaks up the middle for Lennard’s first TD from the Plant City 20.

Riverview looks for 2nd win at home vs. Newsome

Spoto searches for victory in Tampa

Riverview, sporting a record of 1-3, hosts Newsome High School of Lithia Friday night hoping to bounce back after losing last Friday to Palm Harbor 41-25 on the road. Meanwhile, Spoto High is in the same boat, trying to notch a win this Friday in Tampa against King High after losing 28-24 to Robinson in Tampa.

Spoto jumped on the scoreboard first to momentarily quiet the Robinson home crowd and take a 6-0 lead. But Robinson stormed back in a big way with 15 points in the second quarter and 13 more in the third quarter to claim the victory. Both Spoto and Robinson are now 2-2 on the season and 0-1 in District play.

Spoto was led on offense, as usual, by #9 Kobe Smith, running for a pair of scores with 133 yards on 18 carries. The bruising senior running back also added 60 yards on two kickoff returns. Spartans Coach Melvin Jenkins may have found a star-to-be in the person of sophomore quarterback Jordan Guerard who has been outstanding on defense. In the Robinson loss, Guerard, playing at QB, passed for 11 of 22 for 179 yards and two touchdowns. Five of those aerials went to senior Jerson Singleton for 69 yards. Eric Lee reeled in one 45-yard pass for a TD and Caire Anders caught 4 passes for 50 yards and a score. Defensively, Spoto was sparked by Darius Gaffney, Guerard, Marcus Cobbins and Elijah Jacobs, all in on multiple tackles.