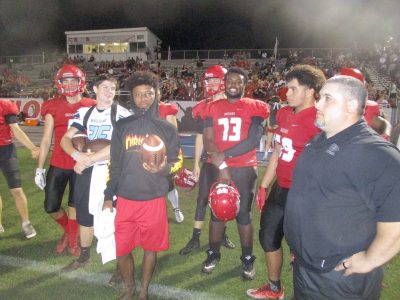 All three Riverview high schools won last Friday night. The unbeaten Spoto Spartans clipped the Lennard Longhorns in Ruskin, the Riverview Sharks grabbed their first win by taking a bite out of Freedom in Tampa, and unbeaten East Bay at home dominated Newsome. This Friday night, Sept. 7, all three play at home: Spoto vs. Freedom, Riverview vs. Chamberlain, and East Bay vs. Robinson.

Riverview, under coach William Mosel, evened its record at 1-1 by beating the Patriots after an opening game loss to East Bay. The Sharks took advantage of a gift from Freedom to win 7-0 in a defensive battle dominated by turnovers. Knotted 0-0 starting the second half, Freedom fumbled at their own 10-yard line on their first offensive series. Riverview toted the miscue down to the 2-yard line and then squeezed in the only touchdown of the game and converted the PAT. The swarming Shark defense made that slim lead hold up behind the aggressive play of TJ Robinson, the defensive player of the game. Robinson received plenty of help from Cameron Lyles, Ryan Green and Luis Mariscol, as the fish defense got their jaws into four sacks, three interceptions, and the fortunate fumble.

Meanwhile, back on the east side of the bay, the Indians outplayed the pesky Wolves from Lithia whose initial bark proved to be worse than their bite.

Newsome jumped on the scoreboard first in the opening stanza on a Dylan King touchdown pass. The Indians quickly took charge on defense and scored 13 points in the first quarter to answer. Coach Frank LaRosa’s squad tacked on a TD with eight minutes left in the game to win going away 20-7. 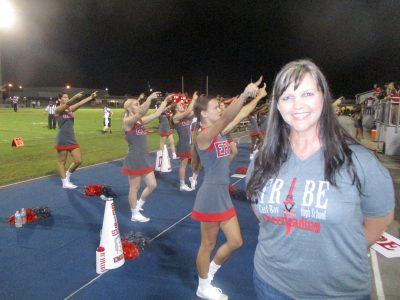 East Bay head cheerleader coach Tracy Howard at Newsome game directing the girls. She is in her sixth year leading the pep squad. Howard is a 1992 graduate of East Bay.

Newsome QB King completed 5 of 13 for the night, good for 68 yards and the early TD. Issac Trammel handled the bulk of the rushing for the Wolves, grinding out 60 yards on 17 carries. Cale Wiedmayer and Parker Mock, a pair of Newsome sophomores, were each in on 11 tackles for Newsome.

The East Bay defense was sparked by senior linebaker Levi Marshall III who participated in 10 tackles and by Jontrell Oliver and Britton Pascoe, both in on 7 tackles. Oliver added a sack.

On the offensive side of the ball, Indian touchdowns were posted by Tre Everett with a 18-yard jaunt for the first Indian score and by Zaron Wright with a 65-yard dash for the go-ahead TD. Joaquin Isidro capped the East Bay scoring with a 3-yard plunge into the end zone in the fourth quarter. Other offensive contributors were Javon Stephens with 27 rushing yards on 7 attempts, and QB Jahkese Cruz who threw 6 times and completed 3 for 32 yards, all to receiver Jontrell Oliver. 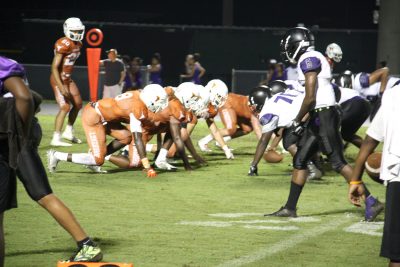 The offense, led by Tino Martin, had another 100-yard game. Martin currently leads the district (7A-9) with 277 rushing yards in two games.

The quick four-day turnaround? The one-dimensional offense? Or did a scrappy Spoto team just want it more than Lennard?

Whatever. The visitors from Riverview brought the high-flying Lennard Longhorns crashing down to a soggy earth last Friday, scoring the winning points with only 1:40 left in the game. Lennard’s passing attack, ineffective all night, could not generate a comeback. After a spectacular offensive opening victory on the road Monday night in Tampa, coach Matt Kitchie’s Longhorns lost its home opener 20-15 before a large, crestfallen home crowd. The loss leaves Lennard 1-1.

Jah’tavis Philpart darted for his second touchdown of the game as Lennard took a 15-13 lead over Spoto with only minutes remaining in the game. Spoto, however, showed resilience under pressure as senior QB Jerson Singletary hit Eric Lee on a 40-yard TD pass play to cap the Spartans’ comeback and seal the Longhorns’ doom.

Darius Gaffney led Spoto on defense with 10 tackles. Corbin Martin also helped Spoto keep Lennard’s offense in check. Spoto QB Singletary hit 7 of 10 passes for 117 yards and the winning aerial. Running back Kobe Smith was the Spoto workhorse on offense, as #9 cracked the Longhorn defense for 215 yards and two TDs.

For Lennard, the tackles’ leader on defense was Kourtland Mitchell with eight. Tino Hunt plunged through the Spoto defense for 105 tough yards rushing, as the Spartans continually stacked the box against him, not concerned about a Lennard passing game, which produced only 1 of 11 completed passes for 16 yards.

SOUTH SHORE: Be a mentor!