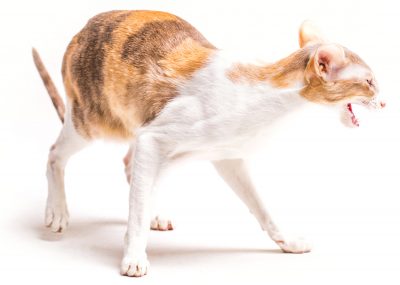 GIBSONTON — The Florida Health Department confirmed last week that a cat that ambushed a man in Gibsonton on Aug. 23 was rabid. Rabies is a disease of the nervous system and can be fatal to warm-blooded animals and humans. 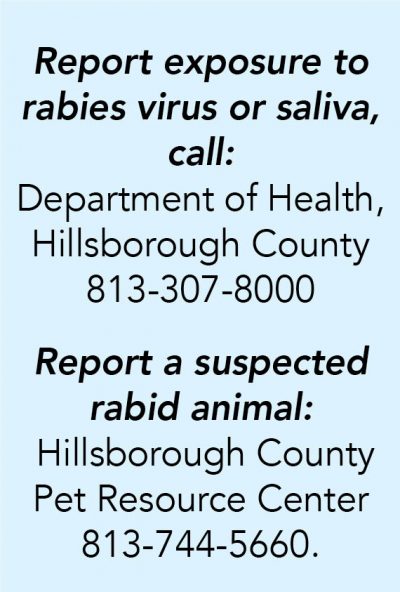 A rabies alert is in effect in the area surrounding Nundy Avenue where the man said the cat “jumped out of the bushes and bit him on the foot.” The victim reported that he shot and killed the black- and brown-color shorthair tabby cat. Following protocol, the dead cat underwent an autopsy, which revealed the rabies.

According to a health department spokesman a 60-day rabies alert was issued to let the public know there could be rabid animals in that area and caution should be exercised. The rabies alert spans an area north from Symmes Road to the Alafia River and east to west between East Bay Road and U.S. 41.

Rabies, said a health department spokesperson, can be a potentially fatal disease. The Gibsonton victim underwent treatment for exposure to rabies and is expected to fully recover.

Kevin Watler of the state health department in Hillsborough told news media that rabies incidents have increased threefold in Hillsborough County in less than a year. Nine rabid animals have exposed 20 people and four dogs to rabies to this point in 2018. Six of the animals were cats, two were bats, and one a raccoon. One of the bat bites was inflicted on a Sun City Center person who was bitten on the arm in a parking lot and did not realize the bat was still clinging to her arm until she returned to her residence, according to the DOH.

Department of Health (DOH) statistics reveal that in 2017 only three rabid animals were reported and 10 people exposed.

There are probably more animals out there that could have rabies, said the DOH spokesperson. “The numbers are definitely higher than previous years.”

People should avoid contact with any animal that lives in the wild. Some may be tempted to feed or help the animal, but this is a big risk that should be avoided. The only definitive way to determine if an animal has rabies is a lab examination.

The DOH advises residents and visitors to take the following precautions: