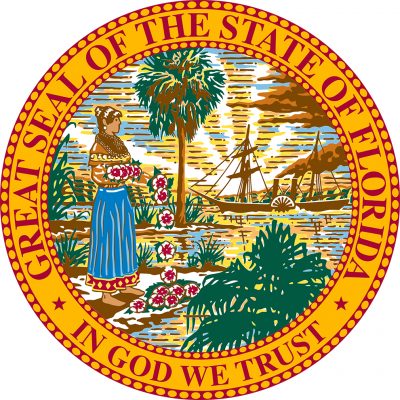 ‘In God We Trust’

Waiting on signs from district

Those four words are on every dollar bill and other U.S. currency.

The same four words are displayed on the state of Florida’s official seal as the Sunshine State’s motto since being adopted in 2006.

Now, since its passage as HB 839 last spring by the Florida State Legislature, “In God We Trust” is mandated to be displayed in every public school in Florida. The law went into effect July 1, 2018. Every legislator in the Hillsborough delegation voted for HB 839 before Gov. Scott signed it into law.

Schools in South Shore have been tardy in complying with the new law. None of the schools contacted last week had the words displayed as per the law. The schools say they are waiting on the Hillsborough School District to provide uniform signs. And the Hillsborough School District tells The Observer News that the district is preparing framed renditions of the seal of Florida, which also bear the prescribed-by-law motto.

“The frames are on the way,” said a school district spokesperson last week, although no specific date could be provided for their arrival in each South Shore school where the law also requires the motto to be displayed in “a prominent place.”

Public schools opened in South Shore Aug. 10, and there does not appear to be any public or school administrators concerned about the late response to the new law. The state seal with “In God We Trust” will be displayed in each school and district building as required by state law, responded a Hillsborough School District spokesperson to an inquiry about the situation. “We will be sending out 250 pictures (of the state seal) in frames shortly for all our schools and office buildings,” added the spokesperson.

State Rep. Kimberly Daniels, a Jacksonville Democrat, sponsored the motto-in-the-schools bill. Daniels also commented that God is the “light” and “our schools need light in them like never before.” She also said the new law is a lesson to children about the national and state mottos printed on currency and included in the state flag.

Although no legal challenge has yet to be filed concerning this small step to bring God back into the public schools, advocates of separation of church and state continue to have reservations about this motto, claiming it runs contrary to the United States Constitution, which prohibits the government from passing any law respecting an establishment of religion. An overwhelming majority of the U.S. public favors the motto, including those referred to as religious accommodationists, who feel that this entrenched practice has not historically presented any constitutional difficulty, is not coercive, and does not prefer one religious denomination.

“In God We Trust” first appeared on the now-obsolete 2-cent piece in 1864 and has appeared on U.S. paper currency since 1957.