RUSKIN: Longhorns put a 1 in the “W” column 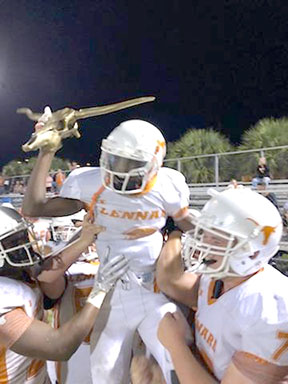 Lennard’s Jah’tavis Philpart gets the Longhorns’ turnover trophy and the boost from his teammates in the victory over Blake. Philpart scored four touchdowns as Lennard won its first game in two seasons.
Photo PROVIDED BY JAMES DAVIS

TAMPA — The Lennard Longhorns of Ruskin stampeded the Blake Yellow Jackets 55-32 with a “total team effort,” according to Longhorns’ head coach Matt Kitchie. After a 0-10 record last season, the offensive outburst provided Kitchie with his first victory at the helm. The win was the first for Lennard since beating Strawberry Crest two years ago.

Lennard lit up the scoreboard in a fashion similar to the lightning that flashed across Tampa Bay skies Friday evening prompting the game to be postponed to Monday night. Kitchie and his 1-0 livestock now face 1-0 Spoto in the Longhorns’ home opener Friday at 7:30 p.m. in Ruskin.

Spoto started the season with a 12-7 squeaker over Strawberry Crest last Friday.

The Longhorns’ rampage was anything but a squeaker as Lennard quickly jumped out to a 7-0 lead and immediately went for blood. Kitchie called for an onside kick off, which the Longhorns executed perfectly. Another rapid TD and extra point put Lennard on its way, despite being nicked for 32 points by Blake.

Kitchie was quick to praise the bulldozers up front for the Longhorns’ offensive line, including five stellar juniors: Mike Rankins, Mike Covine, Braden Nash, Tanner Evans and Elijay Seay. All this orange-clad beef helped pave the way for junior runningback Tino Hunt who rushed for three TDs and 172 yards. Wide receiver Kourtland Mitchell, another junior, also hauled in the longest aerial gain of the night with a 59-yard reception. Meanwhile, speedy senior Jah’tavis Philpart exploded on offense with three scores from the quarterback position and sparked the defense with a pick-six from his safety spot.

Who could blame the Longhorns if they have a little extra pep in their step after the long-awaited breakout victory? But Kitchie said the team has to come back down to earth, “It’s only one win. Plus we have a short week to get ready for Spoto.”