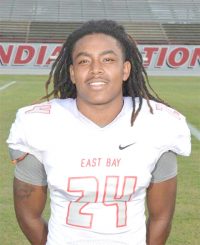 RIVERVIEW — In a season opener last Friday night delayed by lightning and rain, the East Bay Indians cruised past the home-standing Riverview Sharks 28 to 14. The neighboring schools are minutes apart but the Indians have dominated this gridiron rivalry, winning nine straight over the Sharks.

For East Bay Coach Frank LaRosa, a grueling running attack emerged, led by fleet-footed running back senior Tre Everett and consistent quarterback Joaquin Isidro. The Indians’ offense performed well as blockers for those two primary weapons, and the defense repulsed a late scoring threat by Riverview to seal the victory.

LaRosa commented to news media that his offense “did a great job with execution on the blocking,” adding, “it’s going to be a fun season.”

Everett and Isidro, for the most part, were the beneficiaries of that blocking. Everett finished the night with 110 yards rushing on 10 carries, 49 of those yards on two touchdown totes. Offensive penalties wiped out his scoring runs of 72 yards and 76 yards, before a case of cramps ended Everett’s night.

Quarterback Isidro complemented Everett, Mr. Outside, as Isidro mainly ran inside to pile up 122 yards on 17 carries. The senior QB also hit Jontrell Oliver for a 9-yard scoring pass to make the score 14-0 in the first half.

East Bay has its home opener with Newsome of Lithia tomorrow night, Aug. 31, as the Indians look to move to 2-0.

Meanwhile, Coach Mosel’s 0-1 Sharks travel to Tampa against Freedom after the coach’s post-game words, “We’ll go back to look at it and work to get things right.

“Our kids did not quit. They kept fighting to get back into it.”