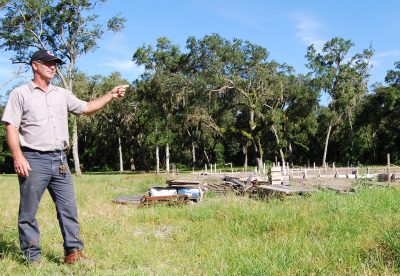 If you were traveling from St. Louis to Sacramento by train in 1870 there was a possibility of your travels being interrupted by the Hole in the Head Gang.

The notorious gang of robbers would board a train and demand at gunpoint money and valuables from the passengers.

It was a harrowing experience.

But come Sept. 8 and 9 you can have that experience at the Florida Railroad Museum in Parrish without losing your diamonds or your life, although you may end up with a bellyful of laughs.

The Hole in the Head Gang, a local group of volunteers dedicated to preserving the history of the Old West, will be performing at the museum, 12210 83rd St. E., Parrish, the two days in September and again on Nov. 24 and 25.

Visitors board several restored passenger cars at the Parrish depot and head out to the little town of Willow, about 6 miles down the track.

There is a rumor the train is carrying a valuable shipment, but all is secure with several United States Marshals aboard.

But a few miles out of Parrish, the Hole in the Head Gang stop the train and board it searching for the loot, all the while harassing the passengers, until the marshals confront them. 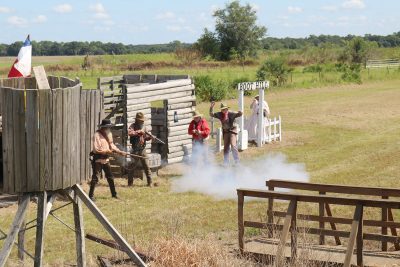 CHERE SIMMONS FILE PHOTO
The Hole In The Head Gang rides again with another attempt to “rob” the train traveling from Parrish to Willow Sept. 8 and 9, then again on Nov. 24 and 25. The Florida Railroad Museum features many events throughout the year, and this is one of the most popular. These rowdy wranglers stop the train at Periwinkle Junction, steal the strongbox and proceed to engage the marshal in a “shootout.” It’s all in fun, of course, and everyone will live to tell the tale. For more information, visit the museum’s website at www.frrm.org.

The passengers get to watch the “shootout” from the safety of the train.

This event is one of a series of productions held year-round at the nonprofit Florida Railroad Museum to raise money.

Along with the train robbery, there is Hobo Campfire, Murder Mystery Dinners, a Day with Thomas the Tank Engine, Civil War reenactments and the very popular, Von Kessinger’s Express (a World War II reenactment that gives passengers a feel for history).

“It’s sold out every year,” said Glenn Miley, event director and road master for the museum.

But the most popular production of the museum is the North Pole Express, where children and their families travel from Parrish on a “magical” train to the North Pole to see Santa and his winter wonderland.

There are 13,000 tickets sold for the two train rides per day for three extended weekends starting Nov. 29 through Dec. 17.

“When they go on sale there’s a line out the door,” said Station Manager Karen Langer. “It’s a crazy time. We have to set up extra computers.”

The tickets are sold out within days.

“This is one of the few events we don’t do any advertising for,” said Pat Masterson, president of the museum’s board of directors.

The revenue from all of the event ticket sales go to operation of the museum, which includes rolling stock, locomotives, 6 miles of track and property and buildings.

FLORIDA RAIL ROAD MUSEUM PHOTO
A model was constructed to show the public what the new building planned for the Florida Railroad Museum, 12210 83rd St. W., in Parrish, will look like when completed in about four to five years.

But now the museum has a new purpose to raise money.

On July 19, civic and museum officials gathered in the empty field next to the tracks and broke ground for a new 25,500-plus square-foot building.

“I’m excited about the project. It will give us a permanent home,” said Miley, who has been with the museum for 20 years and manages the operation for the board.

The new building, which will include a waiting room, ticket office, boarding platform, car shed, community room and handicap-accessible restrooms, will cost around $3 million dollars.

“We obviously don’t have $3 million now, but we will budget so much a year,” Miley said. “So it will be done in phases based on available funds made from events and other income during the year.”

The Winter Haven native, who was raised in Sarasota and now lives north of Ellenton, said the design was based on railroad stations that were built in some of the larger Florida towns. 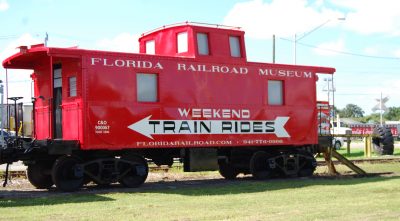 A bright red caboose sits on the track near U.S. 301, about 100 feet north of Wauchula Road, alerting passengers in passing traffic to all the fun and adventure awaiting them at the Florida Railroad Museum

When train passenger service was operating throughout Florida, many of the depots were constructed with Spanish adobe and stucco architectural design.

So after researching Florida train stations, Miley and Paul Chapman, vice president of the museum board of directors, submitted their ideas to engineers, who drew up the plans.

“When you walk into the depot waiting room, which will have 20-foot ceilings, there will be a gift shop on the right,” said Miley as he described his vision. “There will be a few displays (of railroad memorabilia), but they will not clutter the space.

“The benches in the waiting room for the passengers came from a St. Louis train depot,” he said. “And there will be a ticket office, with a ticket seller cage.”

The back wall will be all glass so visitors can see the car shed with some of the museum’s collection of rolling stock on six long tracks under a roof.

“The plan is not to charge to view the exhibits in the shed,” Masterson said. “We want people to mosey around.

“We need something to attract people to the museum and interest them into taking the train ride,” he said. 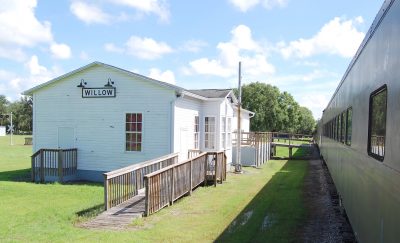 At the northern terminal of the Florida Railroad Museum track passengers can get off the train and visit the Willow Depot, a replica of the wood frame station that once stood at U.S. 301 and Erie Road before it was burned down – twice.

Miley said the community room will have computer wiring and a control area for a light and sound person for performances and conferences.

He said the Parrish Playworks theater group, which helps out with the Murder Mystery Train and North Pole Express events, will have use of the facility for their productions, as well as other community and civic associations.

Masterson, who moved to Sun City Center from New York after retiring, said the new building will help the organization fulfill its three roles of being a museum to preserve railroad history in this part of Florida, being an entertainment location producing all of the fundraising events and being a real railroad.

“We follow all the federal guidelines for railroads,” he said.

The museum has been a part of the Parrish community since 1982.

“Five guys interested in railroads pooled their money to buy railroad cars and rented some tracks from Florida Power and Light, then filed papers for the museum,” Masterson said, who joined the organization in 2004.

For information and to make a donation for the new building, visit the museum’s website at www.frrm.org, or call 941-776-0906. 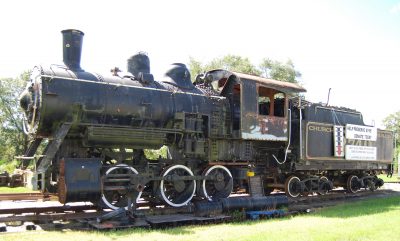 Along with construction of a new building, the Florida Railroad Museum, 12210 83rd St. W., in Parrish, has also embarked on the restoration of the St. Louis & San Francisco (Frisco) 3749 back to its 1950’s condition.